This Week in Blackness: Racism is Over – an Explanation

So, I have totally become hooked on Elon and so once again I am sharing with you, “This Week in Blackness.” 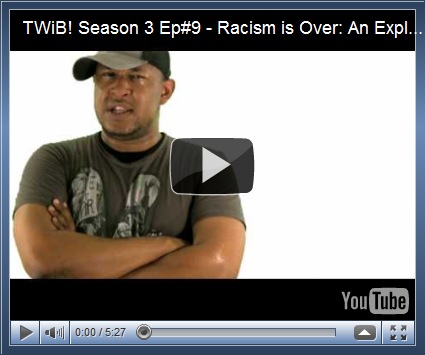 Hi my name is Elon James White and you are watching “This Week in Blackness”.  What is going on folks?  We are back, episode nine season three of “This Week in Blackness.” Yes, and you know what, after last week’s episode, I’m not even going to play around with these us preambles that we do around here.  We’re jumping directly into part two.  Yes, racism is over.  That was the point of she who will not be mentioned on this show anymore because she is really not the point. “She” and a lot of people in America have a similar thought process on the concept of racism being over.  Blacks are just constantly complaining, you know they’re so sensitive these Negros.  Instead of getting out there and handling their business, they’re bitching about how things aren’t fair annd OBVI things are totally fair, just look. ( picture of Obama pops up on the screen) You know when I hear things like that, I think immediately bullshit. Um really, we’re going to try to over simplify one of this nation’s hugest travesties.  Oh just get over it; that’ what we’re going to do.  It’s just not as simple as getting over it okay.  Race place a part in our everyday lives okay, whether it be economically, education wise, uh health wise; it plays a role.  White privilege, institutionalized racism all just disappear, just like the oil in the Gulf.  Actually it’s exactly like the oil in the gulf you know, even though we can’t see those huge plumes of racism, I mean oil, right beneath the surface, we all know that it’s still clearly there. Let’s look at the line of logic behind the idea of racism being over okay. Basically, racism is over because Obama and Obama is president because White people voted for him and White people voted for Obama because White people like Black people -- and if White people like Black people, then racism is over. Ummm, you guys do know that even when people were voting for Obama, they were like, “Yeah,I’ll vote for that nigger” right. Like you guys know that, that’s what some people who actually voted for him were saying.  Even while we were electing the negro president there were tons of polls asking, was America ready for a Black president. Racism was so over we had to constantly ask the American public were they prepared for a Black guy making decisions you know.  Anytime you have to ask people can they tolerate, race, gender, sexuality, there’s a fucking problem. Yeah, that whole Obama president – racism over theory doesn't seem to hold up, especially when you you think about the fact that the GOP’s  number one commodity since he became president was in fact race baiting.   I hate to interrupt myself with that thing, what is it called (snaps fingers) um oh right facts. What about unconscious racism? You know that concept that has been proven numerous times in scientific study after scientific study.  I am talking about studies as recently as this year that Americans unconsciously choose Whiteness over Blackness cause they think it’s better.  And not only do they think it’s better, they unconsciously link Blackness with crimes and welfare.  That’s right son, racism is so over,we don’t even know that we’re doing it son; that is some over tight shit son.  Whatever Blacks, seriously just get over it, just get the fuck over it.  Oh how I love to be told to get over it you know.  It’s like the smell of fresh baked bread in the morning, if that bread was being baked by an unpaid Negro and then later on they were going to have to go pick cotton.  I swear everytime I get into this discussion, I start to think of rape. No I’m not talking about the rape that my people experienced for hundreds of years – numerous times. I’m speaking rape singular.  For a moment imagine the horror of rape okay.  Imagine the mental anguish and the suffering and just pain of experiencing this horrendous thing, then imagine being told to just get over it.  For Christ sake I know you were raped.  Fine I get it, we get it sheesh. I mean come on, that was like forever ago your know.  I’m not even the one that raped you, why you keep acting like it’s such a big deal?  Just like, I mean come on, it was like seriously long ago – come on.  And I know that they didn’t catch the rapist and every time you turn on The History Channel there’s like pictures of your rape and the story of your rape and all that stuff, but like just seriously,  like get the fuck over it. Yes, and like some of you people right now are thinking, “Elon did you just compare what happened to Black people to the horror of rape”