True Blood: I Smell A Rat

Last night viewers who have not read the books, finally learned that Sookie is a faerie. In typical Sookie fashion she exclaimed, "how fucking lame," when she learned. Bill patiently explained to her that faerie blood is irresistible to vampires, which caused Sookie to wonder if this is the reason that he became involved with her in the first place. He says, "Sookie it is not your blood I love. You're mine, your heart your soul, and I will forswear ever feeding on you again if that's what it takes to convince you of that".  I suppose Bill thought that his declaration of ownership was romantic, but in fact, it is just another example of his creepy possessive behaviour.  Somehow, he still irrationally believes that there is difference between him and the other super natural creatures that have been attracted to Sookie. 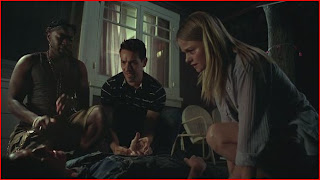 In yet another example of male ownership, Calvin Norris threw a fit when he learned that Lafayette and Jesus saved his life by feeding him vampire blood.  He slaps Crystal and says, "You let these [email protected] put vamper juice into me," before running into the woods. When Crystal tries to explain that she just wanted a taste of the outside, Calvin berated her and insisted that she has a responsibility to mate with Felton.  When she said that she does not love him, he responded with, "You ain't got to love him, you just got to lay under him and have his kids -- keep his blood line going, especially now that you done ruined mine."  Isn't that lovely?  A father telling his daughter that she is little more than a brood mare.  Thankfully, Crystal rejected this and ran away, leaving Calvin to yell that he was disowning her. 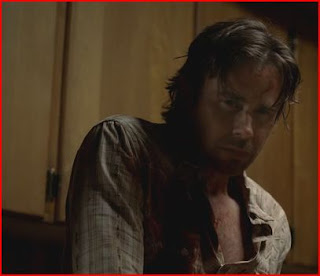 Last night we learned that Sam has a history of violence.  Apparently, before moving to Bon Temps, he was a jewelery thief with his partner Charlene.  She double crossed him with her boyfriend Jon.  Jon told Sam that he should have known that Charlene was too good for him.  Sam decided to get his revenge and snuck up on them in the form of a collie.  When he materialized naked in front of them holding the gun that Jon had just put down, they were shocked.  He holds a gun to Jon's head and demands that Charlene get the rest of the money.  When he begins viciously beating Jon, Charlene pulled a gun out of the car she was searching and threatened to shoot Sam who responded by shooting her in the chest.  He begged her not to leave him, but when it was clear that she was dead, he calmly walked over and  shot Jon in the head.  Honestly, I don't know what to make of this.   I have long felt that Sam was a bit too good to be true, but these latest revelations make him a complete stranger to me. 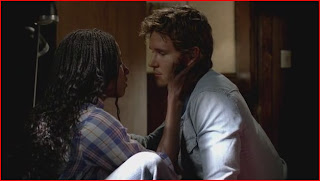 Jason's guilty conscience finally caught up with him this episode.  After killing vampire Cromwell Franklin, he and Tara hide the remains and return to his home.  He holds her as she cries and she shared with him some of her fears.  She told him that he has been saving her since they were children and kissed him.  When he pulled away she apologized, clearly believing that it was she who had crossed the line.  When he followed Sook-eh's advice and admits to killing Eggs, she stormed out of the house. He followed her into the living room and discovered that Sookie had left a message saying that she would be back soon.

When Bill shows up he is enraged to find that Sookie is gone.  In his mind, he left her in Jason's care and therefore he felt that Jason had been irresponsible and shirked his duty.  Jason tried to explain that Sookie has a mind and will of her own, but Bill refused to listen.  When Jason could not take it anymore, he revoked Bills permission to be in his home, forcing him to leave.  I have to say that this scene caused me to laugh.  The shock on Bill's face when he learned that he could not control the situation was priceless. 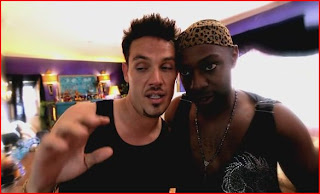 After watching the effects of V on Calvin Norris, Jesus was absolutely intrigued.  He convinced Lafayette to take a hit with him.  I am not sure what is going on with Jesus' character. First he left Lafayette when he discovered that Lafayette is a drug dealer and now he is encouraging him to do V. It seems that he exists to give Lafyette a sexual distraction and to convince the audience that Lafayette has "power."  Lafayette learned that his great great grandmother Winnie created a powder which stopped her master from trying to share her bed.  This was passed down in the family. They met several other members of Jesus' family and learned that conjuring is something that the family has been doing for generations. Already, Ihave this fear that the basterdization of African religions is imminent, given Balls inability to write characters of colour.

Jessica is quickly becoming one of my favorite characters on the show.  When Arlene started to loudly protest Nan's explanation of Russell's action, Jessica couldn't take it anymore and pushed her against the wall and said, "Okay we get it you don't like vampires, well I don't like narrow minded skinny bitches with bad dye jobs, but at least I got the courtesy to keep my mouth shut about it most of the time. I suggest you do the same"  Arlene had that coming and then some, though it will probably only cement her bigoted ideas. 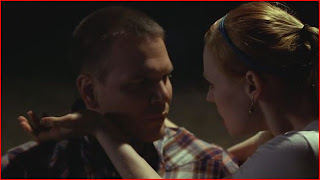 Tommy used the opportunity to tell Jessica that she gave him a hard on, inferring that Hoytt did not accept her for who she is.  Jessica corrected his assertion, and said that Hoytt is too good for her.  Tommy being the bad boy that he is made sure to let Jessica know that she would not have that problem with him. In the meantime, Hoyt finally broke up with Summer.  I guess her buns weren't that exciting after all.  When he told Jessica that he loves her for who she is, she remained silent.  He told her to tell him that she does not love him and she did not answer, and didn'tlook him in the eye.  He walked out of Merlottes in frustration and was followed by Tommy in pit bull form.  Tommy attacked him and sensing that something was wrong, Jessica went out to check.  She threw Tommy into the bushes and told Hoytt that she loves him, as she gave him her blood.

I suppose at some point I have to talk about Sookie.  Her character is really becoming boring to me.  Eric invaded her dreams and told her that she does not trust Bill because her survival instinct is kicking in. This spured her to visit him at Fangtasia where he teold her that he cannot go to his final death without kissing her.  Pam intervened and informed him that he should hand Sookie over to save his life and he rejected her suggestion. When he told her that he did not understand her reaction, Pam told him that he would have done anything to save Godric.  I really love the way that they have highlighted the closeness between Eric and Pam this season. Pam informed him, that if he is not going to hand her over he had better figure out a way to use her.  Eric walked back into the room and chained Sookie up, informing her that she should not have trusted him.

Russell found a prostitute that reminded him of Talbot and he went to a room with him to say good bye.  Russell pretended that Tony was Talbot and he told him, "You're the strongest man that I've ever known.  You made us a home, you made us family.  A haven, a refuge from all that madness.  It's all my fault.  I will never forgive myself, that in the end you were so alone, with no one holding your hand.  Your beautiful, beautiful hand. It is one thing to face eternity without you, but not to have been with you at the truth death,,,"  He then stabed poor Tony in the chest.  While it was comforting to see that Talbot and Russell did indeed have a loving relationship, the murder of Tony was disturbing.  Violence is something sex workers often face.  This scene seemed cavalier in the face of that. I understand that for vampires humans are disposable, but this is the second time we have seen a sex worker murdered as if it were nothing.

What were your thoughts on last nights episode?

Editors Note: Once again Tammi and I will be doing our True Blood podcast tonight at 6pm EST.  Please try and join us live.  For those that miss the show, I will be posting it on the blog after it is over.

Listen to internet radio with TTBatMerlottes on Blog Talk Radio
Posted by Renee at Monday, August 23, 2010