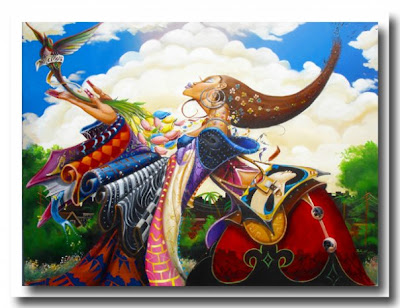 Itoro Udofia is an artist and writer living in Amherst, MA. Currently, she is attending graduate school to study social justice and education. Her work focuses primarily on the African Diaspora, black womanhood, identity, solidarity, and love. She hopes to continue using art as a tool for social justice.

"I never asked Tolstoy to write for me, a little colored girl in Lorain, Ohio. I never asked [James] Joyce not to mention Catholicism or the world of Dublin. Never. And I don't know why I should be asked to explain your life to you. We have splendid writers to do that, but I am not one of them. It is that business of being universal, a word hopelessly stripped of meaning for me. Faulkner wrote what I suppose could be called regional literature and had it published all over the world. That's what I wish to do. If I tried to write a universal novel, it would be water. Behind this question is the suggestion that to write for black people is somehow to diminish the writing. From my perspective there are only black people. When I say 'people,' that's what I mean."

One day, myself and another fellow artist were having an in depth discussion about the nature of writing a “universal” piece of fiction. So naturally, we started referencing points in our lives when someone had asked for us to write a “universal” piece of fiction that anyone could identify with. Or better yet, a piece of a something that was truly, you know, human. As we compared and contrasted our experiences, I realized that there was always a particular scenario (and dare I say power dynamic) that played out with exactly who does the asking and who is usually expected to comply with writing something universal.

For example, I write a lot about being a Nigerian-American woman living in the United States of America. This lived experience of being a woman of color in the U.S. is not something I would categorize as the “quintessential universal experience.” A lot of my writing will probably let you know that yes, a woman of color is writing this and yes, there are particular things that I am calling out that may not exist as you would like to see it, but nonetheless, exist.
When I think of writing a universal piece there are particular names and faces that are always invoked and lord knows none of the people mentioned look or really live anything like I do. They are not of color and as far as I know the names mentioned are rarely ever those of women. I have always found these universal characters to be rather one dimensional in the writing of their sexuality, age, socio-economic status, religious affiliation, body and critical thinking.

When I think of writing a universal piece there are particular names and faces that are always invoked and lord knows none of the people mentioned look or really live anything like I do. They are not of color and as far as I know the names mentioned are rarely ever those of women. I have always found these universal characters to be rather one dimensional in the writing of their sexuality, age, socio-economic status, religious affiliation, body and critical thinking.

In my discussion I had with the fellow artist we compared notes and gained (obvious) insights. We found that it was usually white people who almost always wanted to do the universalizing (in my experience I’ve found that people of color usually want literature/writing about other things, more to come on that later). As a result, my art often came off as being “adjusted” into wise old words spoken by an “authentic” Mystical Negro who told sacred truths in an almost Morgan Freeman like voice. Or, I was painted as a downtrodden black thing that existed within a political, economic and social vacuum that needed pity or worst of all white help. Both of these images were not universal but rather more socially palatable to a white supremacist (yeah I said it) ideology. Moreover, I no longer knew what I was talking about.

Human + Universal almost always =something White Male or something digestible for Whiteness.  And whenever I’ve tried to write something that everyone can relate too, I’ve had air pudding and nothing pie. So I don’t care to write universal and will never give anyone the chance to “universalize” my work again.

I’m in a reclaiming period. I’m taking back any piece of my writing that has been watered down, never even shown, or exploited, and presenting the initial message that was intended. Exhibit A: The poem that will follow was meant to talk about a former friend and lover that passed away last year. It was a good-bye love letter. I watered it down to have it make more sense for someone else’s benefit and spent a year wondering why it never made any sense to me. Now mind you I have not read the original version in almost a year and now that I am in a better place there are a few things I want to revise. But note: The revising is on my own damn terms and I trust my own damn thinking enough to do it. So here it is, as it was written. If you relate to this particular poem fine by me. If not, fine by me. The reclaiming begins…

Untitled:
We can go and find the pieces we left along the way
Retell the story and take the things that make us tattered and torn, tattered and worn
And suture us together again
Weave ourselves into beings that know we need mending,
Leave those clean endings to the fairytales and reside in our shades of gray
Admit we’re a bit worse for the wear and ready to trace the bits and pieces
Trace the things ourselves left that day…
Remember all the things we pushed aside that day
Find the hidden answers and shake the dust out
Call silenced things by their names, as we dig up our skeletons and watch them turn human again
I’ll trace back to when we were outlined with night
And the stars lit your eyes
And the only us seen was eyes and teeth, eyes and teeth
And I traced you and you traced me
I said, “I’ll imprint on you, you imprint on me”
Kissed an, “I love you” on those lips and felt the tingle that sealed it
Took one little star that lit your eyes and put it in mine and left the rest of us there
Us creatures of the night only allowing ourselves a mere outline
In the day, when I thought we were over I took the star out my eye and thought the tingle on our lips out
Maybe you carry the piece of what happened in between that night and the day I threw us away?
I’ll lay these fragments beside one another and bear witness to our brokenness
Maybe we’ll get closer to God’s reflection this way
Knowing we’re a patchwork in need of a trimming cause our edges are frayed
Ask the almighty for a needle and a thread laced with all our thought feelings and those unsaid things we laid to rest
Reaching the Promised Land only to find we left pieces of our essence along the way
Find that we’re a bunch of tiny things in need of putting together
As we dig up our skeletons and watch them turn human again