It seems no matter how many times that Blacks say that Blackface is unacceptable the fashion industry refuses to acknowledge the racism of continuing this trend.  According to Jezebel, the following images are from Numéro, which features an editorial spread in which French model and Estée Lauder face Constance Jablonski posed in a brown Afro wig and dark makeup.  To ensure that they push the envelope of edginess she is given a Black child as an accessory. 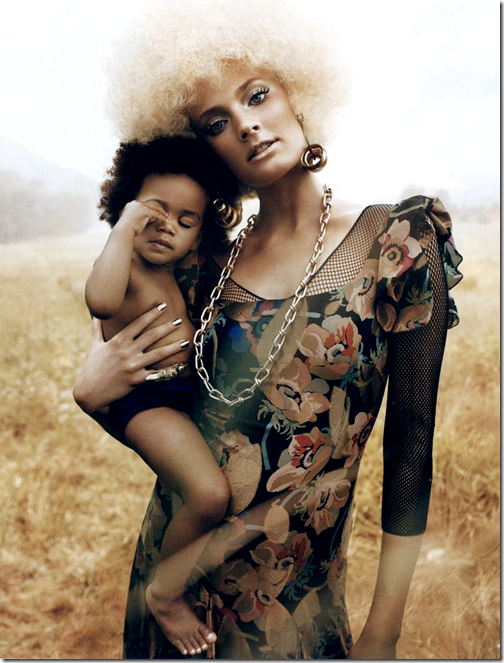 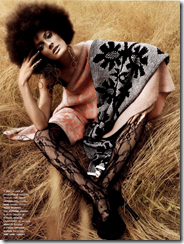 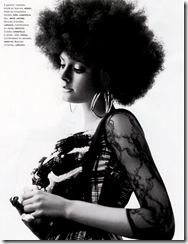 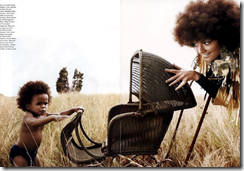 When we consider the historical issues of White women stealing babies of colour, this photo shoot reaches such a level of insult that I barely have the words to register my rage.  There are thousands of Black models knocking on the door fighting for an opportunity to be featured and yet they are almost always universally rejected, but somehow racist Blackface is the look that these advertisers and agencies are looking for.  This advertisement is a complete and utter rejection of Black womanhood. It signals that we don’t belong and that there is no role out there that White women cannot best us at.

I am often accused of hating White women and yet there is a continual failure to acknowledge the ways in which White women use race to attack us, belittle us and oppress us. This model had the choice to participate in this offensive photo shoot.  No one forced her to put on the makeup and stand next to Black child.  You cannot remove your White privilege but always have the choice of whether or not you are going to be actively or passively racist.  I don’t dislike White women, but don’t trust them because repeatedly it has been made clear that if the choice involves elevating White womanhood or acting in concert with Black women to promote womanhood and equality, the choice most often results in the promotion of White supremacy. This is not a simply photo shoot, because it is loaded racism and stands as yet another example of exactly how ingrained the desire to belittle people of colour is.