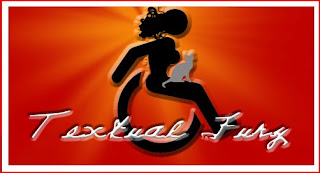 Kateryna Fury is a 26 year old New Mexico native that works for equality for all, with a writing focus that deals primarily with disablism. She is currently working on writing several audio plays, a book, and blogs regularly at TextualFury. She lives with her two cats who constantly break all the rules and encourage her to pet them and play. When not satisfying her kitty overlords she writes, and writes, and writes some more!

The American Media has chosen their Celebrity Miner out of those who have survived the tragedy. A man who is mentioned by name not en masse with the other miners, and who has quickly been demeaned and portrayed as a hick, a savage, or damaged. I understand he was traumatized but it is for him to determine if his traumas will keep him from functioning and doing what he wants. 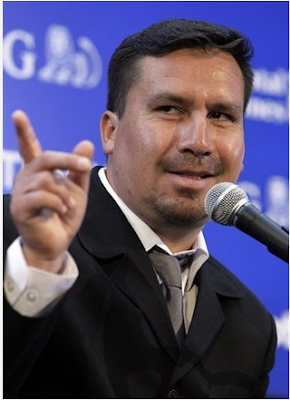 Edison Pena: The Chosen One

I understand too his need to compete in the New York Marathon. What I am struggling with is the reduction of this man to a single point of tragedy in his life. He is not a cheater of death, he is not merely a miner from Chile aka “The Chilean Miner” he is Edison Pena. I have no idea what that means for him but the media has spelled out in terms such as quaint and endearing that this adult man likes Elvis and how he cheated death by not giving up and continuing to run in the tunnels of the mine to keep the depression at bay. The condescension of the New York Marathon in presuming that this man would just want to hold the finish line tape astounds me.

The image in my head of him is alternating based on the descriptions in the articles that I have come across, not linked because I am mad and because one is in my cellphone, are of a kicked and useless puppy with a bad knee and of a towering paragon of Chilean Mineryness. He is either the hero or the desperate and needy man who needs a pat on the head and has the perceptions and wants of a child.

I am insulted as the reader. He should be insulted, though I suspect being the chosen one out of this mess by the US media and getting to go places like Graceland and on the David Letterman show will push this aside for him at least for a while, the media should be punished for this same old stupidity. I have only seen one picture of the men who survived this tragedy after their rescue. I understand that they had to fight to survive and I am glad they did. I have had a similar fight more than once, and so I get that surviving may not be over. Just the thought of being trapped under unstable rocks that could crush you for an hour or two is enough to make me nervous. To survive that way for months is impressive and likely most of these men will face Post Traumatic Stress Disorder.
I am staring at the picture of Pena and I know what made him be chosen. You see Pena is handsome in the narrow way of Hollywood, he is willing to risk intensive pain to fulfill a dream, and he is fawning to the media to a degree. I choose the word fawning because of the tone of the quotes chosen but I am trying to keep in mind that this man is being portrayed as essentially amazing because he isn’t a lazy Latino. That’s the entire tone of the article. I want to punch this article in the testicles.

I am stuck on the idea of cheating death too. Since everyone dies eventually, do people presume that we cheat death every time we wake up and have a day? Is that cheating death? Or is surviving something despite the odds considered cheating death because the concept of surviving is beyond these soft and squishy blobs of media pundit? The concept that anyone could cheat death fills my head with laughter, deep and rich ominous laughter. You can’t cheat death. Life and death by that statement are reduced to just a game. It becomes a nonsense event to live or die.

Does someone dying of a heart attack who gets medical treatment and lives cheat death? Does someone who is murdered somehow not know how the game is played so they were just asking for it? Was this man supposed to not do what he felt it took to cope? I think the words cheating death anger me most out of the non-racism parts of these articles. These two words detract from the act of living itself and they imply that life is a game and has no value so you can play with it and put yourself at risk.

Why is it because a person is more than a single event in their lives the media has to use catch phrases like this in order to “make them more accessible” as the industry puts it. People are people, we live and breathe beyond the moment that the news knows of our existences. We struggle, we fight, and every day people survive horrible things, yet this is not cheating death. It is merely cheating the media out of an opportunity to sensationalize our deaths. The media which has lost sight of what truth is, if it ever knew.

I felt this grating for a while, when it came to the media’s method of mentioning these men. They have all been reduced to their jobs, always it was mentioned how accommodating they are being as if these men had a choice other than to sit and wait under the earth for rescue, and now they have been reduced to a single face. No more victorious faces, just a single man that has been chosen by a fickle and cruel media to represent the entirety of Chile for who knows how long. I feel very sad for Mr. Pena. I hope that people show him respect but based on the tone of the media thus far? He’s going to stop being a cute puppy eventually.

Here are some images of the other miners and their family members who also endured this tragedy from another angle, a reminder that they exist too. Just don’t forget they are people beyond their jobs. These are people who suffered. In fact this story has a romance in it that I find is of the true variety not the media hounding variety. Not by Pena. There are other stories to be told and lives that are to be lived but perhaps these other men chose privacy instead of an attempt at fame. 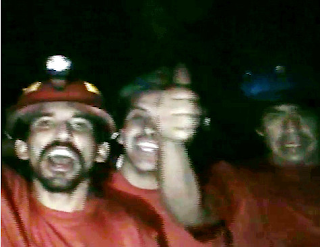 Excitement at Progress in their Survival 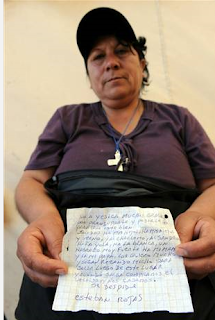 Jessica Gainez shows the letter sent by trapped miner Esteban Rojas in which he says when he get out they'll get married.
Here is a list of the names of each of the people that were trapped. There are 33 names. So why reduce these people to a single individual?!