Police Brutality at the Oscar Grant Protest on November 5th, 2010

Inoculated City is a blog about how -isms are everywhere - even in the bay area. From questioning seemingly accepted discrimination to being a tattooed vegan, this is Berkeley, not West Bay.

I was arrested on Friday night along with over 150 other people at the peaceful protest in Oakland against Judge Perry’s minimum sentencing of 2 years with time served for Johannes Mesehrle, the former BART police offer who shot and killed Oscar Grant on New Year’s Eve 2009 at Fruitvale BART while Oscar was handcuffed and on his stomach.

The activities started at Frank Ogawa Plaza at 2pm, where live art and building an altar for Oscar Grant took place: 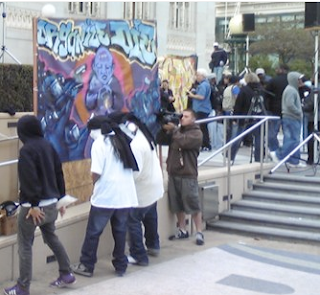 live art in honor of Oscar Grant - I took this photo but feel free to use it anywhere you want.
At 4pm, there were live performances (spoken word poems, hip hop and other genres of songs, etc.) and speakers.

At 6pm, we were no longer allowed to use the sound system in a public area, so we commenced with a protest headed towards Fruitvale BART, the original scene of the crime where Oscar Grant was senselessly shot and killed by Johannes Mesehrle. The protest consisted of marching, chanting, and holding signs. 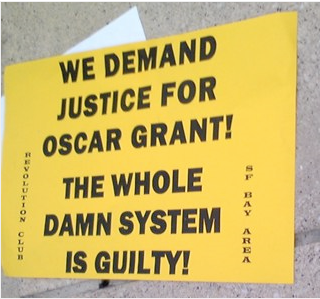 my sign from the protest
We marched down 14th St. and continued in the direction of Fruitvale until we got to Laney college, where the police formed two walls on either side of the block we were on, thinking that they were trapping us, but all the while giving no order to disperse or communicating whatsoever. Unfortunately for them, their intimidation plan failed, because we cut through an empty construction site to the side and continued the march. Because of the police cutting us off, we were forced to enter residential areas, where we ended up getting blocked in once more by the police when we got to east 17th and 6th st.

The above video (not filmed by me) shows what happened when we were trapped by police, who refused to give a dispersal order and allow us to peacefully leave. As you can hear around 4:15 in, at one point we started chanting, “Let us leave! Let us go!” We were not choosing to stop there in a residential area to try to prove a point. The police stopped and trapped us on that block to try to prove a point. After this video was taken, police allowed members of the media to leave the blockade, but refused anyone else the right to do so.

The above video further shows the refusal of the police to allow us to disperse. As one of the leaders of our group told the media 30 seconds in:


“Who is the commanding officer? Who is in charge? We have been in conversation with these people and we know that there are ground commanders here; they can make decisions.  This group wants to walk. We want to walk to Fruitvale. “

Shortly after that video, the following happened:


The police announced that media had to leave or they would be arrested. No one without a video camera/proof of media was allowed to leave. Seconds after that, the following announcement was made:

“THIS HAS BEEN DECLARED A CRIME SCENE AND YOU ARE ALL UNDER ARREST.”

At this point, I still did not believe that most of us would be arrested, since plenty of us were more than willing to leave peacefully, and even those that weren’t simply wanted to link arms and stand peacefully. But it quickly became clear that I was wrong and we were, quite literally, all being arrested as one by one people were cuffed. After each person was handcuffed with zip-tie cuffs, we were led to an area in the middle of the block and forced to sit down. We were then each paired with an individual police offer who took down our information. We were patted down very aggressively, much more so than was needed to check for weapons (unsurprisingly), and our bags were searched. Individual pictures of each of us with our names and birth date were taken, and we were lined up as we waited to be put into paddy wagons and buses and carted off to North County jail in downtown Oakland. This process (of even getting us into the cars) took an hour. The man cuffed in front of me had a renal liver issue, and was about to pass out. The police offer partnered with him was informed of this, and refused to steady him or allow him to sit. He then started to collapse and was allowed to temporarily sit on the ground.

Throughout this process, police were making countless jokes to each other about us, and directly to our faces, including laughing hysterically as they told us that we were all being booked on felonies, an outright lie that they knew was a lie as they had already filled out our booking papers with the misdemeanor of “unlawful assembly.” As water bottles were passed out to the police, many of us requested water. Not only were we were refused, even those of us with medical conditions, but a policeman near me even poured out a bottle of water on the ground in front of someone who had requested water, and laughed in the person’s face.

When I was finally put into a paddy wagon with 12 others, the driver deliberately drove in an erratic and irresponsible manner, slamming on the brakes suddenly for no reason and swerving just to make us bounce around and hit the hard sides. It was the single most nauseating ride of my life, and that’s no coincidence.

When we arrived at the jail, we were forced to wait in the paddy wagon for awhile, and one arrestee urinated herself after multiple requests for access to a toilet.

When we were allowed to exit the paddy wagon, we were searched again, and were told to give up our shoelaces (which is standard procedure), though they were even inept at that, as some people got away with keeping their shoelaces on because the police didn’t notice. Our bags were obviously searched again, and they found several prescription medications I have. My name is on them, and it matches my legal ID, so they wrote down the prescriptions and asked me how often I needed to take them. I told them that I had to take one of them daily, that I typically took it with dinner because I had to take it with food, and that I didn’t get to take it yet that day. I was told that I would be allowed to take my prescription, and that food would be provided for me to take it with. This did not happen, but more on that later.

After we were searched and relinquished our shoelaces, we had to give urine samples so they could do pregnancy tests on them, as prenatal care is required for pregnant inmates, so anyone who was pregnant would have to be moved to a different facility. The police told one woman that she was pregnant, only to let her have a panic attack before laughing in her face because they had been “joking” (lying) the first time.

After “passing” the pregnancy test, I was then put into a holding space with around 10 other women at that point (later, more than 20 women were in that same holding cell). Shortly after, they took me to get fingerprinted and take an official mug shot. They then brought me to a different holding space with 12 other people, all of whom were also arrested at the protest. Obviously, there were many, many different holding spaces, crammed full, to fit all 150+ of us.

After about an hour had passed, myself and others who were in the holding cell with me very politely asked every guard who passed if I and others with health issues could have access to our prescription medicine that we were promised. I also needed access to my other two prescriptions, which are for migraines and sciatica (a lower back nerve problem that results in extreme leg pain and numbness when one is immobilized for long periods of time in a sitting, standing, or lying down position, which obviously I was as I was in a jam-packed cell). Despite constant requests throughout the night, all of us were refused access to our medicine.


Other police actions that happened throughout the night:
This is only the tip of the ice berg regarding what happened that night, and what happens every single night to people in jail. Almost all of us had bruises on our arms from the way the cops handled us, despite the fact that no one in my group had even remotely resisted arrest. Our rights were violated due to police abuse of authority and police brutality at a peaceful protest against police abuse of authority and police brutality.

Yes, some negative things happened during the march, by a very, very small handful of people consisting of less than 1% of the entire group. I saw a few people jump on cars and break a window, people that I had seen earlier at the plaza passing around a bottle of whiskey. What they did was not acceptable. But they, and only they, should be held accountable, not the hundreds of us who did nothing more than march with signs and chant. The police absolutely knew that it was an incredibly small group of individuals doing anything wrong; they arrested us all to make a political point that police have the ultimate power over civilians to do whatever they want, whenever they want, and will not take anyone questioning that.

So QUESTION IT! Remember the reason we were protesting? Because a white police officer shot an unarmed, cuffed, peaceful black man point-blank and was sentenced to less than two years in jail, with time already served. He shot a man and took an innocent human life, and only has to serve TWO YEARS! That is NOT RIGHT, it is not justice – nor is arresting people for peacefully protesting, nor is the God complex police have and the way they treat people both in and out of jail. We can’t let police continue to have unchecked, unlimited power in society.

If you are in the bay area, please come to a Berkeley Cop Watch meeting.