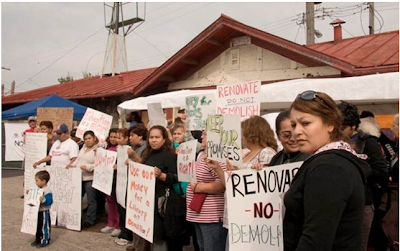 The media constructs motherhood using very narrow parameters.   Good motherhood means all sacrificing and loving, but it also means quite often White and affluent.  Even the bloggers most often understood to be "mommy bloggers" are White and middle to upper class.  Motherhood is also rarely seen to be a political identity because it is a role fulfilled by women and yet we know that in the name of motherhood women have completed acts of heroism, self sacrifice and political activism -- yet the media simply wants to fixate on reductive stereotypes of women.


For nearly two weeks, dozens of parents at Whittier Elementary School in Chicago’s Pilsen neighborhood have occupied “La Casita”, the fieldhouse and community space adjacent to the school that’s divided parents against administrators for over a year. In 2009, they learned that $350,000 of the $1.3 million in tax money the City of Chicago was using to renovate the school had instead been allocated to the building’s demolition. The saga started seven years ago, when parents and community members started lobbying Alderman Danny Solis to cull money from city coffers in order to fund a school expansion for the already-crowded campus.

When parents saw that La Casita was slated to be demolished, they were appalled. “The fieldhouse is a great space to have,” Lisa Angones, mother of students in 6th and 7th grade at Whittier, told ColorLines on Friday. Angones plans to spend this weekend sleeping in La Casita in protest. “The funds that they want to use to knock down the school could easily be spent to make it into a library.”

While the city maintains that La Casita is structurally unfit to safely handle occupants, inspectors hired by the community say that with the exception of a leaky roof, La Casita is perfectly safe. (source)

Note that the source of this story is not a mainstream news site like CNN, ABC, Fox or MSNBC but a small blog about race.  Unlike mothers of class privilege, poor mothers must constantly agitate for basic human rights for themselves and their children necessarily making their very existence political. Many of the privileges dominant bodies take for granted marginalized women and children must fight for everyday and this is what makes motherhood so completely radical.

The government must have known that this school did not have a library and rather than altering a structure already in existence they chose instead to demolish it.  What could more of a necessity to a school than a library?  Libraries are the great intellectual equalizer.  You many not be able to afford a class in sociology, philosophy or anything else that you are interested but a library is a place where the poor can learn free of charge.  For many the library functions as the only source of internet access and this school -- this supposed place of learning did not have a library.  What does this say about society's commitment to investing in those that do not have class privilege?


What these mothers were fighting for is a basic need and yet the city responded by turning off the gas to the building for two days while they were staging a sit-in.  Why bother to listen to their needs, they are after all just a group of poor mothers and this means they lack institutional power?  What the city did not count on was the depth of their agency.  These women continued to occupy the building until the city agreed to support the library.  Even then, the women did not abandon the building, and so they waited to get the support in writing. This is what I call radical motherhood and this what I call agency and power.
Posted by Renee at Thursday, November 11, 2010