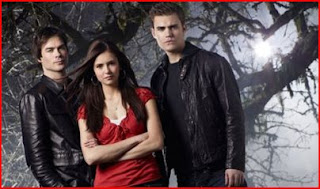 The plot line of The Vampire Diaries is moving very quickly for a network show.  This week Elena is kidnapped.  I didn't even bother to get my hopes up that this would be the end of her. When she awakes to find herself in a room she believes the reason that she has been kidnapped is that she has been mistaken for Katherine.  Elena repeatedly tells them who she is and asks to be let go and when she will not be quiet, Rose punches her in the face, knocking her out.  I know I am not supposed to be thrilled by violence but I have been wanting to see Elena silenced for some time now.

Reminding us that this show is really about pseudo teenagers they actually had a scene in a school this week.  We see Tyler's frustration trying to open is locker when he accidentally rips the the lock off.  He questions Caroline desperate to know how she knows so much about him.  Jeremy approaches Stefan to tell him that if he and Elena are going to spend the night together that he has to give him a heads up so that he can cover with Aunt Jenna.  I found that line to be ridiculous because we all know that though Jenna is supposedly a parental figure, the last thing she ever does is lay down the law with these supposed kids.

A missing Elena calls for Bonnie to do her magic woo woo thing. When Jeremy and Stefan approach her, she does a location spell and Damon and Stefan go on a road trip to find Elena.   Along the way Damon tells Stefan that Katherine warned him that Elena would be in danger but he chose to ignore her because of her history of lies.

When Elena wakes, she hears Rose and Trevor arguing.  When Elena asks what is going on this time Rose tells her that she is the key to the curse because she is the Petrovna doppleganger.  Rose and Trevor plan on handing her over to the ORIGINALS as a way to gain forgiveness for not turning over Katherine years ago.  Apparently they have been on the run for 500 years.  I am really hoping that they expand on this because the idea of Elena being a doppelganger of Katherine's is absolutely ridiculous. Rose tells Elena that the curse can only be broken by her blood and that Elijah is her worst nightmare.

Bonnie tries to calm Jeremy's fears about his missing sister.  She decides to send Elena a message to let her know that help is one the way.  Apparently this is one act of magic too many as she passes out with blood dripping from her nose.  When she finally comes to she tells Jeremy that this is a reminder that doing magic has a cost and she can only cast so many spells.  She swears him to secrecy because she knows that this is a weakness.  I think once again this indicates that Jeremy and Bonnie are going to end up together.  I will say that this makes it even ore problematic that she is their resident witch and does their bidding whenever they want.  Knowing that she risks extreme pain and damage to herself Bonnie still sacrifices and this is a damaging message to send about POC.

Tyler shows up at Caroline's hoping to bully her into sharing information. He wrongly assumes that she is a werewolf and when she denies this he begins to attempt to physically intimidate her.  She throw him across the room and bears her teeth saying, "I told you I am not a vampire."  It seems that Caroline really identifies with Tyler's struggle and she makes him promise not to share any of the information she tells him.  Tyler says that he has no one and is terrified of the change that is going to happen on the full moon and then breaks down crying in Caroline's arms.  I suppose they are going to make Caroline and Tyler a couple though I have to say that I am against this.  Even though Caroline is now aware of how Damon abused her last season she has no problem taking orders from him and now she is showing pity on another male bully.  The writers seem to want to empower Caroline and make her a strong female figure while at the same time not giving her the strength to sever relationships with men that have been abusive.  What does this tell us about abuse victims and their supposed endless capacity to forgive?

Elijah shows up and promises Rose forgiveness if they hand over Elena.  When Elijah sees Elena he is shocked because he believed that the Petrovna had ended with Katherine.  Trevor apologizes profusely for his actions and begs forgiveness but Elijah responds by taking off his head and announcing that he forgives Rose. Elena makes a desperate ploy for more time and tells Elijah that she knows where Katherine and the moonstone are and that she will lead him to it if he lets her go.  Elijah simply rips off her vervain necklace and commands her to tell him.

Damon and Stefan show up and manage to rescue her by pushing a stake through Elijah's body.  When they return home, Damon goes to Elena's to return her necklace.  He says to her, "I just have to say it once, you just need to hear it. I love you, Elena. And it's because I love you that...I can't be selfish with you...and why you can't know this. I don't deserve you. But my brother does. (Damon kisses her forehead) God, I wish you didn't have to forget this. But you do".  He puts her necklaces on and disappears out the door.  Okay so my inner teenager loved the romance of that line and I know deep down you sighed to.

Back at the Salvatore's Rose enters the room and tells Stefan that she has been running over 500 and years and that she was told that he is one of the good ones.  Stefan tells her that he cannot help her.  How knight in shining armor eh?  Rose informs him that she is not there to ask for his help but to help him because Klaus wants Elena.

It is just as I suspected at the beginning of the season, Katherine may have a villainous nature but she is not the real threat this season.  I always knew there was going to be a man behind the woman pulling the strings.

Editors Note:  Please join Tammy, Paul and I as we chat about the latest episode.  For those that are not able to listen live I will post the podcast when we are done.
Posted by Renee at Monday, November 08, 2010