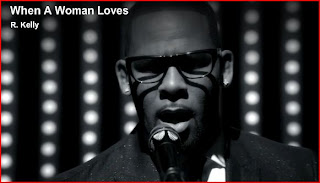 There are 2,894 post in the archives of this blog. The pieces cover a myriad of subject matter and yet some of the most commented on posts are those directed at R. Kelly.  Despite having Black sons, Black brothers and a Black father, I am not one of those Black women that feels the need to uplift Black masculinity at the cost of Black women.  Call it a sense of preservation.  I fundamentally believe that Black women matter, and that means that though we share the same race, Black men do not have the right to abuse us at will, to uplift themselves in the project of maintaining the Black male patriarchy.

I recently got yet another letter regarding my post on R.Kelly's song When a Woman Loves.

Although you claim to be a pacifist and a humanist, your comment (or should I say your opinion) about the artist suggests you are neither.

What pacifist would use as vitriolic a  language as the one in your blog? What humanist would relegate reason and rationality to the back seat for some personal gratification?

You can quibble all you want, but one fact is clear: R Kelly has accomplished  more through his music than you and your blogging will ever dream of replicating. Little wonder you have to keep reminding yourself of the ludicrous evidence made up by an over-zealous prosecutor in an attempt to tarnish R Kelly's reputation.

I can only feel sorry for the two kids you are supposedly raising; how sad that they have a pessimistic, vindictive, bigoted, and self-righteous woman for a mother. Humanist? Please look up the word again. Sleazy and disgusting people like you make me sick.

I am not going to deal with the personal attacks in the e-mail because they are irrelevant, what matters is the suggestion that not supporting R.Kelly makes one deficient in some way.   Black women are continually accused of being angry and unreasonable, when we speak out against the harmful actions of abusive, violent, rapist, Black male celebrities. The fact that some find Kelly's music pleasant to listen to, should in no way invalidate the fact that he has a history of abuse.  (Yes, I remember his so-called marriage to a teen-aged Aaliyah)

In the spam que, which contains comments I refuse to publish, on the various R. Kelly posts, there are a multitude of comments asking me to seek Jesus and to turn the other cheek.  Only God has the right to judge I'm told, which makes me wonder why we have a judicial system in the first place.  God did not create Black women to be abused by Black men because they can sing, act, or box.  Everytime a Black woman allegeds wrong doing against a Black male celebrity, she was asking for it in some way, she was acting grown or she is nothing but a gold digger.  It seems that once one achieves a level of fame, rape and violence are deemed an impossiblity.  It is victim blaming at it's finest and it has to stop.

I absolutely acknowledge that some of the loudest voices defending men like R.Kelly, Chris Brown, Terrence Howard Baby Wipes, and even that no good Mike Tyson, have been Black women themselves. To me, they stand as evidence of people who have internalized the misogynist hatred that has been aimed at Black women for generations.  Just because society has taught you to believe that you are without value, does not mean that you have to accept it.  WAKE THE FUCK UP! Invoking God in the situation does not make it any better either.

I am absolutely sick and tired of the shaming and victim blaming everytime a Black woman finds the strength to report an assault.  If a 30 year old man, urinating on a 14 year old girl, is not cause for concern, regarding the sexual violence that young Black women face, then nothing will ever sound the alarm.  Black women have the right to live lives free of sexual violence.  We have the right to say no at anytime, no matter how much money is in a celebrities bank account. And I really believe it is long since time that these supporters of violent men acknowledge that rape isn't about sex; it's about power.  These celebrities who have beaten and raped Black women, do so because despite all of their achievements, power for them is still expressed with the ability to substantially hurt women.

I also think it is important to acknowledge that we cannot count on allies to stand up for us when we are taking part in the rape apologism.  Even as I write this, there is a twitter protest called #MooreandMe in which women are fighting the rape apologism engaged in by Michael Moore.  This effort has been going on for days and even as I support it and participate myself, I must ask: when was last time such social outrage was displayed over the violation of a Black woman?  The answer of course, NEVER.  Being silent has a cost, defending the abuse by Black men has a cost and unless you want to one day find yourself on the receiving end of misogynist vitriol  and violence, I suggest you stand up to be counted.  Remember ladies, God helps those who help themselves.
Posted by Renee at Tuesday, December 21, 2010