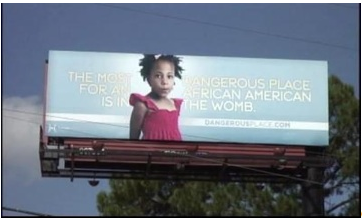 Let me say from the very start that I absolutely 100% support of the right of women to choose.  Motherhood is very hard work and the children that are born deserve our complete commitment to raising thoughtful, responsible, caring human beings. This task is of course multiplied when one is a member of a marginalized community.  Despite the social narrative that Black women are welfare queens living high on the government hog, pro life campaigns continue to shame us into giving birth to children.

A Black woman fills the screen and says, "so this pregnancy wasn't planned; it's going to be okay really."
The screen switches to a newroom.

Erin Cargile: Drivers heading south on I35 can see this billboard just behind me (pictured is an image very similar to the top of the post except it includes a young boy instead of a girl) Now a different version was banned from several U.S cities including Dallas and Houston and I'm told never made it up anywhere, but can see it on the web.  You can see the smiling face of an African American boy on this billboard near 8th street and I35.  Behind him it reads, "the most dangerous place for some children is in the womb." and then directs drivers to the website dangerousplace.com.  It's part of a massive anti-abortion campaign put together by the Austin based pro-life non profit Heroic media. Commercials have been running too that reach out to African American women.

Kim Speirs:  The overwhelming majority of facilities are in minority neighbourhoods. We think they need to know that.

Erin Cargile: That information is tacked on the website, along with the message that was banned from billboards in a number of U.S. cities that reads, "the most dangerous place for an African American is in the womb."  It claims that Planned Parenthoods founder wanted to "stop the reproduction of the unfit".  And says that an African American baby is three times more likely to be aborted than the rest of the population.

Kim Speirs:  We don't tell anybody what to do. We believe that once a woman learns positive, hopeful, compassionate alternatives, she'll choose life.  It's really that simple.

Erin Cargile: Now in a statement late this afternoon, Planned Parenthood said:
"Planned Parenthoods mission is to provide, preventive affordable health care to everyone in the community regardless of their race, ethnicity, sex, religion, sexual orientation, or ability to pay."

They go on to say:
"This expensive media campaign generates media attention but unfortunately does nothing to provide critically need health care and education in the Austin community."

Now according to the state, in 2008, there were a total of about 3700 abortions performed in Travis County. We're live from Downtown Austin tonight KXAN Austin news.

This is not the first time that pro life birth activists have attacked the right of Black women to choose. This attack is no way less race than the actions of Margaret Sanger the eugenicist founder of Planned Parenthood.  According to Clutch Magazine:


While the focus on Black women may make many think that abortion numbers for African-American women are on the rise, they are not. While Black women have higher rates of abortion based on race (38.5% of all abortions), White women still account for over half (almost 60%) of all abortions.

This further denies the agency and right of women to choose, as well as the systemic factors involved in reproductive choices.  I find it interesting that a White woman was chosen as the face of this pro life group and yet Whiteness is certainly a significant factor in the life chances of people of colour.  Why are we to believe that their intent is any more benign than that of Planned Parenthood, when the reproduction of people of colour has historically only been encouraged when it would create profit for Whiteness?   The truth of the matter is that race plays a large role in the choices that Black women are forced to make.  Calling us welfare queens (read: irresponsible, lazy whores) was a part of Regan's path to the White house. Even when we are independent, educated, successful and married, the media will still refer to us as Baby Mommas, as Fox News did to Michelle Obama. To say that Planned Parenthood has an agenda that involves the eradication of Black people, when this is the express project of Whiteness itself, assumes that people of colour have no understanding of the world that we live in.

There can be no doubt that Sanger was a racist among many other negative things.  I don't believe in saying someone was of their times and therefore Planned Parenthood should openly acknowledge this.  The fact of the matter is, regardless of where their clinics are located, they cannot drag pregnant women off the street and force them to abort their babies.  They cannot effect whether women want to be mothers, have the financial resources to raise children, or the community support necessary to be an effective parent.  What Planned Parenthood can and does do, is provide health care to those most in need.  What these pro birth activists continually fail to realize, is that even if abortion where to become illegal tomorrow, abortion would not end, it would only involve the death of women at the hands of back ally abortionists.  Women will always choose.

I am further disgusted with the slogan that the most dangerous place for an African American is in the womb.  This is absolutely meant as an attack on Black women.  Our bodies that nurture life, that have sacrificed generation after generation are supposedly the most dangerous place?  It isn't growing up in impoverished neighbourhoods because of racism.  It isn't being viewed as surplus population and being imprisoned in the penal industrial complex.  It isn't in the military, which spends a disproportionate amount of time recruiting in poor communities of colour.  It is certainly not the race based violence that continues to target the Black people for simply existing at the hands of Whiteness.  It is Black women who decide to exercise autonomy over their bodies for a multitude of reasons and choose abortion instead of motherhood.

These ads are about more than the right to choose, these ads are about denigrating Black women.  These ads are racist and sexist and absolutely constitute a form of hate speech against the Black community.  If these pro birthers really cared about Black children, they would work to eliminate child poverty, and increase access to good food and higher education.  The project really isn't about the children, it's about ensuring that Black women know their place.
Posted by Renee at Monday, January 03, 2011