Fox Nations Asks: 'Was Reagan more of a friend to blacks than Obama'? 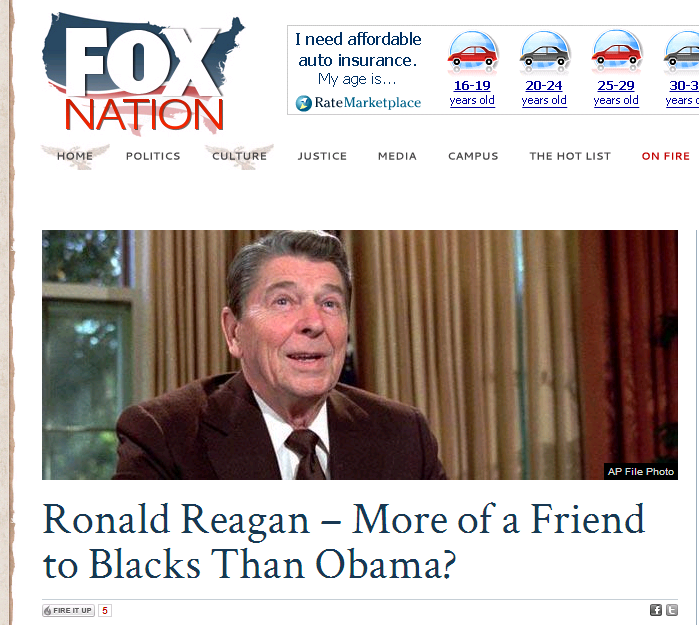 I saw the above image on twitter, and I thought there is no way this shit can be real on MLK day of all days, but I should know better than to give FOX News the benefit of the doubt. I did a quick search on google and found that not only is the image real, but it is accompanied by a story that tried to prove that Reagan was better for Blacks than Obama.
I don't believe in mincing words, and so I will just say without reservation, that Reagan was a racist.  His actions reveal that not only did he have zero respect for Black people, but that he was dedicated to undermining the effort for civil rights.  Republicans like to sanitize history and refer to themselves as the party of Lincoln, but what have they don't for Blacks lately? Thanks to the complete mess that G.W. made of the country, they are constantly casting their revisionist eyes on Reagan and in many cases deifying him.  Reagan was no friend to Blacks and here is why.
Obama may not have created ground breaking legislation to help improve the lives of Blacks, but he has certainly never actively acted against the best interests of African Americans.  The very fact that he and his family now reside in the house that slaves built is the culmination of the effort of millions over the course of many years.  History will judge whether Obama fulfilled the dream, but to declare in the present day that Reagan was somehow more friendly to Blacks than Obama, is to engage in revisionist history. This suggests that we should see the efforts of White supremacy to attack us as positive.  Reagan was anything but a saint and though Republicans would prefer that people of colour that forget this fact