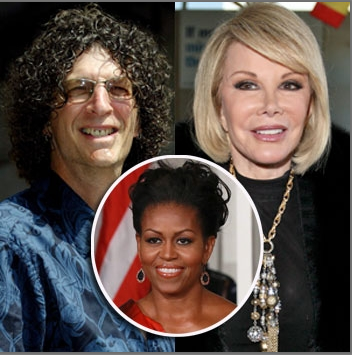 Much of the racist vitriol aimed at Michelle Obama has been responded to with crickets.  The silence was so deafening in the blogosphere, that Gina McCauley, felt driven to create The Michelle Obama Watch.  Even people who claim to be liberal and anti-racist, seem to have no problem ignoring the attacks aimed at the FLOTUS.  The fact of the matter is, that  Michelle's body represents two marginalizations: she is both female and Black, and this makes her vulnerable to those that see Black women as exploitable, "othered" beings whose sole purpose is to serve the needs of patriarchy and White supremacy.

Joan Rivers apparently was recently on the Howard Stern show to promote her new show Joan and Melissa Know Best. Many comedians seem to have a problem telling a joke that does not depend on an ism which attacks marginalized bodies, and it would seem from her comments on the Howard Stern Show,  that she is not immune.  The following a transcript of the conversation and the interview can be heard here.

Okay, she didn't tell the joke originally because she thought it would be construed as racist, but apparently she wasn't so bothered by being saddled with the label of racist, because she had no problem telling it to Howard Stern and his listeners. I would like to know what changed?  I highly suspect that on a show like Stern's, she felt sure that she would escape a media fallout, which is exactly what happened.  Where is the media outrage to Joan Rivers referring to Michelle Obama as "Blackie O"?  How many blog posts have you read excoriating her for this clearly racist language?

Michelle Obama, has been compared to apes, called radical, racist, ugly, anti-American, Barack's baby mama and my personal favorite, Stokely Carmichael in a dress. Throughout it all, she has held her head up and continued to serve a country that is largely ungrateful for the labour that she gives them FOR FREE each day.  Make no mistake about it, despite the perk of living in the house that slaves built, she is expected to work daily without any form of payment.  The Obama's have never had the cover of "respect for the office" and Michelle Obama has taken the brunt of the assault.

If you are waiting for a backlash because of the latest racist attack on Michelle Obama, I suggest that you don't hold your breathe, because I highly suspect you will suffocate to the sweet serenade of crickets first. Despite the fact that Palin (it's not February yet people) routinely complains that the media is far too liberal, the truth is that like every other agent of socialization, it is highly dedicated to promoting and maintain patriarchal, White supremacy.  "Blackie O" is not a compliment, nor is it funny; it is a slur and the fact that this hateful commentary can be swept away under the guise of comedy, proves how insidious the project to oppress and demean Black women really is.  Being the first lady, Michelle cannot say what I am about to say, but I am sure that the sentiments are mirrored by many women of colour, fuck you Joan Rivers, how's that for funny?
Posted by Renee at Monday, January 24, 2011