Tyler Perry is worse than herpes.  The man just will not go away.  He has become the king of coonery and buffoonery.  Because his movies both support White supremacy and make a profit they continue to be released. 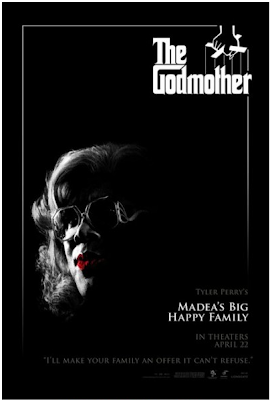 According to Clutch Magazine:


The film, “Madea’s Big Happy Family” is based on Perry’s hit stage play bearing the same name and will star Loretta Devine, Lauren London, Bow Wow, and (super fine) Old Spice pitchman, Isaiah Mustafa. It is set to be released April 22nd, and Perry is hoping it follows in the successful footsteps of his previous films.

“Madea’s Big Happy Family” will be Perry’s 11th film with Lions Gate Entertainment, and will center around Shirley, Loretta Devine’s character, a mother of five adult children who is dying of cancer.

I admit that I have not seen the play on which this movie is based, but judging from Perry's track record, would it really be wrong to assume that we are in for another treat that involves, hueism, sexism, Christian fundamentalism,  and my favorite - racialized drag.  Perry defends his work by insisting that the market proves that he is fulfilling a need and representing people that are often ignored by mainstream media.  I would answer that charge, with the fact that White supremacy sees no need to continue with the project of coonery and buffoonery, when it has convinced Blacks to do the work of oppressing themselves with people like Perry. Wouldn't Amos and Andy be proud?

In my conversations with like minded people, one of the topics that continues to arise is whether bad representation is better than have no representation in popular discourse.  Does the beloved token actually bring forth a progressive project?  Perry is not only a successful director, he owns his own studio and many of the actors and writers given work by him are Black.  Perry's movies are one of the few efforts in by the media, in which one can see all Black ensembles. Again I am still forced to challenge he worth of this because of what this representation has produced.  If we lived in a world in which Black actors, and artists regularly got work, what Perry does in and of itself would still be problematic, but it would be put into context.  As it stands, as a nearly singular representation of what an all Black cast can accomplish, the repeated tropes do far more damage than they do good.

I have struggled with this conclusion, because part of living in a White supremacist state as a person of colour is fighting to see yourself as an individual.  One of the most insidious facets of White supremacy is that White people are people, whereas; Black people are a whole, or a collective, in that the thoughts, actions, or speech of one, is deemed to represent the whole.   Perry is not wrong when he suggests that there is a segment of the Black population that highly identifies with the characters that he creates, the issue is that because of White supremacy, these very flawed characters are expected to represent the whole.

This brings to rise the question of who really is at fault.  Would we mind what Tyler Perry does if there was a cornucopia of Black art available for consumption and were strong in the belief that the legendary coonery and buffoonery that he engages in would remain separate from us? Would Perry even have a career, if he didn't continually pander to those that have internalized racism?  The fact that hueism plays a major part in every Tyler Perry film suggests that without the negative influences of Whiteness, the very nature of the movies that he makes would have to change.  Even with the removal of every single racial aspect, there is still the sexism in his movies to deal with.  A woman that is strong and sure of herself has no positive role in a Tyler Perry film, but caricatures like Madea, who have made him a million year, continue to have central roles. I suggest that without the isms that he has become dependent on, Tyler Perry as we know him, would not exist.
Posted by Renee at Friday, January 21, 2011