Save your apologies, Chris Brown

This is a guest post from Tami of WhatTamiSaid 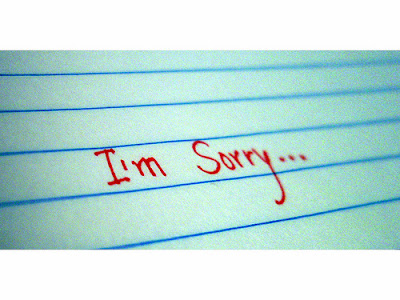 Who knew one could find valuable life lessons on the wall of a sandwich shop?

I was waiting for my Italian Night Club at Jimmy John's when I spied a lesson on giving proper apologies. I paraphrase:

So simple. It's astounding so many public people apologize so poorly. (Cough...Keith Olbermann...cough)

Here is another important thing to know about apologies: Sometimes they are simply not enough. Sometimes they change nothing. Sometimes the only way to prove you regret a certain action is to commit to longterm education and a change of behavior. Sometimes anything less is an offense.

Just last week, the convicted abuser who assaulted then-girlfriend Rihanna nearly two years ago in a beating heard round the world, was showing off his certificate for completing a 52 week domestic violence course. But the man who announced last year he wanted to be "a role model" -- who said, "I want to definitely be a man and learn who I am and learn how to control emotions" -- behaved like neither a role model nor a real man when singer Raz-B offhandedly tweeted, "Im just sittin here Thinking how can niggas like @ebenet & @ChrisBrown disrespect women as Intelligent as @HalleBerry11 @Rihanna." That seems to have been sufficient provocation to undo all that anger management Brown's been striving toward. He swiftly – and crudely -- shot back, "nigga you want attention! Grow up nigga!!! Dick in da booty ass lil boy."

Ah, the old "You're such a homo" retort. Always a classic. Brown soon followed it up with another charmer: "Tell me this @razb2k!! Why when the money was coming in u won't complaining about getting butplugged! #homothug!!!" Read more at Salon...


"Yesterday was an unfortunate lack in judgment sparked by public Twitter attacks from Raz-B, who was bent on getting attention," Brown said of the virtual feud. "Words cannot begin to express how sorry and frustrated I am over what transpired publicly on Twitter. I have learned over the past few years to not condone or represent acts of violence against anyone." Read more at MTV...


"I love all of my fans, gay and straight," Brown went on to say. "I have friends from all walks of life and I am committed, with God's help, to continue becoming a better person."

Well, glad that's all cleared up.


Actually, this latest incident is "cleared up" in the way Brown has "cleared up" past bad behavior, including domestic violence charges: With a sorry, no doubt publicist-fueled apology, followed by more bad behavior demonstrating that he scarcely understands what the crispy heck he is apologizing for. Brown seems to use bow ties and po-faced references to Jesus to appease avid fans, while he avoids the hard work of actually "becoming a better person," who is not a violent misogynist homophobe.

Using a verbal apology to make up for viciously beating another human being or using homophobic slurs to taunt an alleged victim of sexual abuse is like using a Band-Aid on a gaping wound--doesn't begin to cover it.

Brown's problems are too big to be solved by a poster on a sandwich shop board, but I do have my own three-step advice for the singer:

As a woman and someone who tries to be a GLBT ally, this is the only sort of "apology" I want.
Posted by Renee at Friday, January 07, 2011