Terry McMillian Thinks the Smiths are "Pimping Their Children"

You might be familiar with Ms. McMillian from books such as, How Stella Got Her Groove Back and Waiting to Exhale.  McMillian has also gone through an extremely public divorce with her husband. Through it all, the one thing that has remained constant , is that McMillian has always spoken her mind.  Recently, she took to twitter to share her thoughts On Will Smith and two of his now famous children. 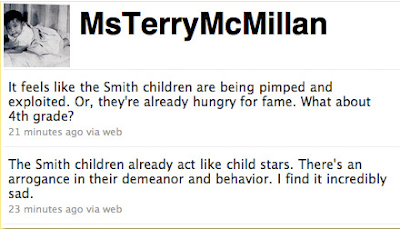 There can be no doubt that Willow and Jayden both know how to rock a red carpet.  There has also been a lot of conversation about how the Smith's are handling their kids education. Just typing in Willow Smith and education in a Google search window, will reveal many hits.  Given that their parents are celebrities, it really is unsurprising that acting and music is a big passion for them.  Because the Smith family are extremely public, people also feel that they have the right to dissect how they parent their children. There is also the issue that children don't have the power to be able to speak for themselves and don't exist with maturity to always be able to make the decisions that are in their best interest.  Fame comes and goes, but an education lasts a lifetime.

Are you in agreement with Ms. McMillan?  Do you believe it is the right of the public to publicly comment on the Smith children? Further, given the tendency for child stars to have multiple issues before reaching adulthood, do you believe the Smiths are really doing their children a service by giving them a push in the industry?
Posted by Renee at Friday, January 28, 2011