Beyonce in Black Face is NOT Art 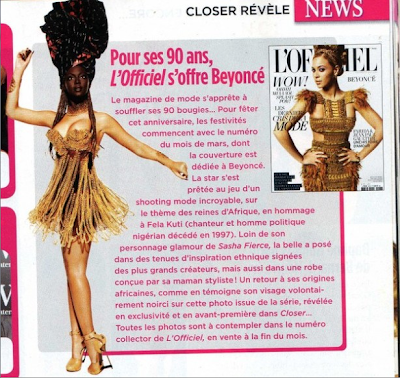 In celebration of Fela Kuti, the pioneer of Afro beat, Beyonce recently posed in Black Face, for a French magazine. From the looks of it, it seems that the magazine in question, felt that because it was a Black woman in Black Face, instead of the multiple instances of White women donning Black Face, that this magically made it acceptable.  In a word - NO.  First, let's start with the recent conversation that Beyonce has become lighter over time.  Black celebrities have a history of lightening their skin - Michael Jackson anyone?  We all know that light, bright, and damn near White sells.  It makes Whiteness comfortable and creates a division amongst people of colour based squarely in hueism. Even before the skin bleaching rumors, Beyonce was still considered a light skinned Black woman and so, for her to don Black Face, furthers the mission of dividing people of colour.
There is also the issue that Beyonce is an African-American woman.  Did the Black African models suddenly disappear from the face of the world?  Were there no beautiful women in Kuti's native Nigeria, that could possibly fill the bill?  To me, this smacks of Western privilege.  Just because Beyonce is Black, does not mean that she can take the place of an African woman.  It feels like they simply thought that any Black women would suffice, as though we do not have any sort of variation based in culture and history. In a sense, it is yet another example of POC being considered interchangeable by Whiteness. I suppose, despite the supposed post-racial era we supposedly live in, we all still look alike to Whiteness.
Just as the magazine is at fault, so is Beyonce.  I could understand if she did another photo shoot and found that the editors lightened her skin colour.  This is a regular occurrence, because Whiteness believes that light skinned people of colour, is the only representation that is reasonable, even when the woman in question is absolutely beautiful. In this case, Beyonce chose to wear this Black Face.  We know that she is not in need of money, and therefore; she was either completely unaware of the complications of Black Face, or she simply did not care. Neither of these options is a good one.  Ignorance of internalized racism, does not function as a valid excuse. Just as we would not allow ignorance as an excuse for the perpetuation of an ism by a dominant body, it is equally unacceptable for a marginalized body to perpetuate racism through thought or action, that hurts all POC.
Hueism continues to be a problem for the people of the African diaspora, as well as in Africa.  It is the result of racism and colonialism.  The above image specifically mocks Blacks who are darker skinned, and turns our bodies into objects to be reduced at will. It is not new, edgy, or even avante garde.  What it is, is supremely racist and yet another example of Whiteness attempting to define us -- with aid the of a Black person -- who was not racially savvy enough to understand or care, that they were nothing but a tool in the continuation of White supremacy and Western hegemony.
Posted by Renee at Monday, February 21, 2011