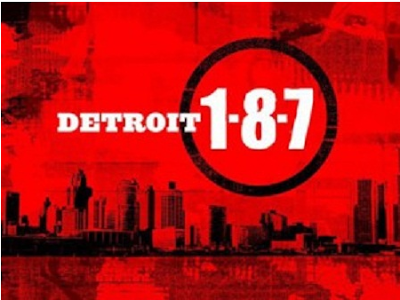 I have stayed away from writing about cis-sexism and transphobia, because I have made so many fails in the last year, that it became obvious to me, that I need to take my own advice and STFU and learn.  As part of this learning, I have been doing a lot of reading and trying to understand the ways in which society perpetuates cissexism.

I recorded this week's episode of Detroit 187, and just got around to watching it last night.  What I saw was a complete disregard of some very basic human decency aimed at what were potentially trans women or cross dressers.  What troubled me as I viewed the episode, was how normalized the approach was. It made me wonder how many people saw the episode and did not pick up on the "othering," because we have privileged not only cisgender status, but a specific form of performing gender.

At the beginning of the show, the detectives are called to a murder seen with a dead woman.  As they begin discussing the body, the coroner lifts up her skirt and announces, "hold the presses folks, yup dude looks like a lady. It looks like we've got ourselves a dead drag queen."  This was quickly followed by Special Agent Jess Harkins saying, "well if there's one thing they taught us at Quantico, it was always check for suspicious packages."

This happened within the first three minutes of this week's episode. Genitalia does not equal gender and assuming that the victim identified as male, before for ascertaining hir preference, is without a doubt cis sexist.
In the very next scene, the detectives are at what looks to be a drag club.  Again, I feel it necessary to point out that just because the club appears to be a drag club, in no way means that there aren't trans women in attendance. The following is a bit of the dialogue from this scene.
Det Aman Mahajan: So how does one refer to a drag queen anyway? Is it he or she or what?
Agent Jess Harkins: She in when in drag, he when not.
Sgt Jesse Longford: I'm using he.  The one thing I can't overlook on a woman is a penis.

When Mahajan at least had the presence of mind to ask about pronouns, I thought that the producers and writers where trying to redeem themselves from the terrible "dude looks like a lady" commentary in the last scene.  It seems that once again, making sure that a strict gender binary was enforced, was the driving force behind this episode.

Would you say that is enough transphobia and cissexism for one episode?  Well guess again. Here is what happens when the detective sat down to talk to Christina (a woman at the club) and her boss about Detroit, the murdered woman in the alley.


Christina: That's her. I could recognize those Tina Turner legs anywhere.
Det Aman Mahajan: What was her name?
Boss: Detroit like Detroit but French
Sgt Jesse Longford:We need the real name
Boss: That is her real name
Agent Jess Harkins: Sorry girls, what does her W2 say?
Boss: Donald Tucker
Sgt Jesse Longford: Was Mr. Tucker here tonight?
Det Aman Mahajan: Was uh Detroit here tonight?
Boss: She was on stage about 11, she was supposed to a private party in Troy later so she rushed out to catch the bus
Christina: D works all the time; she's a superstar. When she does it's raining men, you literally feel like it's raining men.
Sgt Jesse Longford:She have problems with any of the other performers?
Boss: We're a family. Civilians don't always get us.

It was left to these women to defend themselves against the cissexism of Sgt Jesse Longford.  No one called him out for his bigoted language, and when he did finally decide to use a feminine pronoun, he did so grudgingly. Proving that his transformation was temporary, the first suspect that Longford questioned, he accused of being gay, for being attracted to Detroit.  So, now not only do we have a cissexist hot mess, we can add homophobia to the list of wrongs with this episode.  Clearly he felt that anyone with a penis was absolutely gay, if they had a relationship with a trans woman or a crossdresser.  This ignored the gender like sexuality is absolutely fluid, and that genitals do not determine gender.

In the second interview they spoke to Detroit's boyfriend.  He insisted on calling her Don and referred to her with a masculine pronoun.  If that wasn't bad enough, he added that he believed that the ladies in the club weren't really ladies, because some of them were pushing 200 pounds.  I seriously could not fill out a bingo card fast enough to keep up with the fails.  In his commentary, we have a touch of sexism, cis sexism laced together with a lovely bit of fat phobia.  Yeah for isms Detroit 187.

In the end, Detroit was killed by his stalkers wife.  She called  Detroit a man in a dress, and blamed her for ruining her marriage.  I think that this ending was problematic, because it played upon the stereotype of deceptive trans women, latching on to unsuspecting men.  How many times have we seen this sort of thing as a defense in murder trials? Trans women face an inordinate amount of violence and usually it happens out of a desire to support and maintain cis supremacy. Trans women are hated simply for existing and no action is necessary on their part to end up dead.  The ending used by Detroit 187 heavily implied that Detroit was responsible for her own murder, because she didn't do enough to stop a man from stalking her.

I know that Detroit 187 is a crime/cop show, but honestly, I am tired of seeing these portrayals.  There are trans women and cross dressers living perfectly happy lives.  The meme of the murdered trans women/cross dresser is the only angle that the media wants to pay attention to.  Would it really have been that hard to just weave a trans character into the plot without relying on so many cis sexist memes? In the end, the viewer was left  with the belief that the victim (trans woman/ cross dresser) was still an "other," who had played a part in the violence aimed at her?  I wonder if the producers thought they did a good job, because they had a character who transgressed the gender binary?  Sometimes, no representation, is better than bad representation.
Posted by Renee at Friday, February 18, 2011