Motherhood and My Valentine's Failure 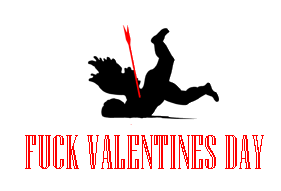 The first year that Destruction was in school, I searched all over town for French Valentine's Cards.  After much frustration, I finally decided to make my own for him to give out.  When he came home, I found that all the Valentine's he received where in English.  I  quickly proceeded to pitch a fit, and vowed never to put myself through the craft thing again.

Last night, the kids reminded us that they needed cards to give out today, and so the unhusband got dressed and went out in the cold to the dollar store.  He came home with the typical meaningless kids valentines cards, and my oldest sat down to address them.  This morning, while they ate breakfast, I sat down to address the cards for Mayhem.  As I was writing this, I found myself getting more and more frustrated.  I told my oldest that this will probably be his last year with the fake cards, as he will be in grade five next year.  He was not happy with this suggestion.  I tried to tell him that today is nothing but a greeting card holiday and he completely denied the truth of this.

I know that I have gone along with a lot of the typical childhood myths, like the Easter Bunny and the tooth fairy, but the Valentine's ritual is the one that bothers me the most.  Each year that I give my kids these false cards to hand out, it normalizes this fake love tradition that serves to enrich, florists, hallmark, and jewelery stores. Furthermore, handing these cards out on mass cheapens the idea that this day is supposed to be about the people we love above all else.  I tried to tell them that I don't need a special day to tell them that I love them, or their father, but they were not able to see beyond the hype that has become Valentine's day.


It was not until they walked out the door, that I realized that I should have talked about the heternormativity of the day.  All of the Valentine's commercials that air, feature a man giving a woman a gift, which typically ends with her in tears.  I have yet to see a commercial elevating the love of people of the same gender.  This holiday also promotes a gender performance, because it is specifically cast as a woman's holiday, with men trying to spend just enough not to be forced to sleep on the couch.  Men give and women receive; this is the narrative that has become popularized. In many ways, it mimics our understanding of heterosexual sex.

There is also the factor of blood diamonds, flowers grown in horrible conditions that lead to serious health issues with workers, who are barely paid a substance wage, and let's not forget the slave labour that goes into making chocolate.  What happens if you are poor and cannot afford to buy extravagant gifts?  Does this mean that you love less?  What if you are a single person on Valentine's day?  Are you suddenly worth less because there is no significant other sharing your life?  What about the fact that there are so many different kinds of love, like the love between a parent and a child, between friends, and as I said before, people who are in supposedly non normative relationship, the LGBT community, or those who are polyamorous? There are so many issues behind the facade of romantic love that go unexplored, because there is a profit to be made by convincing people that spending money on trinkets is how best to show our love.

As I write this, I have become more and more convinced that I need to move beyond the irritated commentary I shared this morning to really highlight the issues of this supposed holiday with boys.  For the past few weeks, I have allowed them to watch the commercials without commentary, thereby aiding in the indoctrination that this day actually means more than any other day of the year.  In my silence, I have excluded issues like slavery, sexism, capitalism, and heterosexism, all because it seemed easier to just go along.  Just going along is how we end up with adults who have no ability to think critically about the world around them.
Posted by Renee at Monday, February 14, 2011