Below the fold you will find a transcript and my thoughts.
Transcript 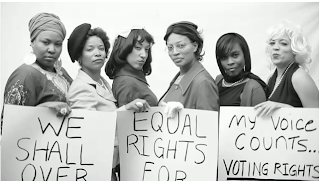 Betty Shabazz: When I walk into the room White people wanna shoot me.
Coretta Scott King: I'm the wife of a king, so I always do it big.
Rosa Parks: I don't like taking a back seat to anyone.
Marilyn Monroe: Some call me a talentless gold digger (giggle) I don't even know what those words mean.
Maya Angelou: I am the curve of my hips; I rise.
Winnie Mandela: I will not stop till my people are free. We are not to be detained.
Narrator: This season on The Real Housewives of Civil Rights
Coretta Scott King: I love Betty but sometimes she can be a bit too much.
(The scene moves to Betty handing Coretta a document with a few pages stapled together) What's a friend contract?
Betty Shabazz: It says right here that we'll be friends for a whole year, unless one of us gets killed by the FBI. Sign it, Sign it.
Coretta Scott King: Oh no I'm alright Betty
Betty Shabazz: Oh Coretta, sign it.
Coretta Soctt King: Betty No
Betty Shabazz: (she hold up a gun and points it at Coretta) Sign it.
Coretta Scott King: Uh Betty, I don't have a pen
Betty Shabazz: By any means necessary
The scene shifts to 'Winnie Mandela', she is wearing a green dashiki
Winnie Mandela: I thought it would be nice for the girls to meet for lunch and catch up.
(Coretta, Betty, Winnie, Rosa and Maya are now seated around a table laughing) Oh well, I am so glad y'all could make it.
(Alone In a corner sits Marylin Monroe. Above her head is a sign that reads Whites Only)
Marilyn Monroe: (giggles) It's so nice.
Rosa Parks: I'm not sure what I'm supposed to say here.
Betty Shabazz: I don't know what made Marilyn think she could sing
(Marilyn begins to sing a terrible version of Happy Birthday Mr. President)
Maya Angelou: I wrote a hit song for her and she still can't get it right.
(scene changes to MLK played by Wayne Brady. He is dressed in a dark suit and tie)
MLK:  I had a dream for Coretta and me, but that dream has now become a nightmare.
(scene changes to MLK walking out of the house and Coretta following him)
Coretta Scott King: Martin where you going?
MLK: I'm going to Selma to march.
Coretta Scott King: I'm tired of you always going out there marching, leaving me alone here with these kids.
MLK: Okay you know what? You know what?
Coretta Scott King: What?
MLK: I tried to be nice. I've got signs. The kids helped out with the signs.
(scene shifts to MLK standing on the sidewalk holding up a sign as a car drives past and then quickly reverts to him talking to Coretta)  I have to go and march. I've been bitten in the ass by dogs, hosed down, had bullet thrown at me and none of them have hurt me more that your mouth. Martin!  Shut the hell up. Do you know how that hurts my head?  All these neighbours see me yelling at you right now; it makes me look crazy. I'm Dr. Reverend Martin Luther King.
Coretta Scott King: Malcolm X is the father of your youngest child.
MLK: Bitch (MLK charges at Coretta.  The scene then shifts to Rosa Parks who is drinking out of Whiskey flask who growls deeply but for yet another scene shift to Marilyn Monroe)
Marilyn Monroe: I don't like to talk about my big because he's married, and as president, that would be bad. (scene shifts to Maya Angelou back at the restaurant)
Maya Angelou: succulent and tender, breast of life that swims, breathes, lives in the deepest depth of my ocean.
Waiter: So are you going with the chicken or the fish?
Maya Angelou: The chicken.
Marilyn Monroe: Good choice Maya, I love the jarred meat.
(scene shift to a car with Betty Shabazz and Malcom X. Betty hands him the receiver of a phone. Note: This is an old fashioned phone.)
Betty Shabazz: It's Coretta
Malcom X: Hello Coretta, I don't have a problem, having a problem, if I have a problem with you. I (he hands the phone back to Betty)
Betty Shabazz: Hello Coretta. She hung up.Malcolm (groan)
Malcolm X: Puts the car into gear, honks the horn when he cannot move) What's the problem?  (The scene once again shift back to the restaurant. This time they are all siting in the Whites only section with Marilyn)
Winnie Mandela: So I know that we have all had our problems with each other, but I'm glad to have you all in my life. ( white male cop approaches the women)
Cop: Alright ladies, y'all know, you're in the Whites only section.  Let's go. (Rosa sits back in her chair giving the cop an angry look. All the other ladies except Marilyn get up to leave)
Coretta Scott King: Rosa come on, let's go
Betty Shabazz: You don't have to refuse to give up your seat everywhere we go. (Rosa stands and quickly leaves as the cop says:)
Cop: Hey umm enjoy your meal now mam and uh the chicken is delicious here.
Marilyn: (giggle) thank you
Cop: Alright
The final scene is the image at the beginning of this transcript.

Okay, here we go again with comedy/satire being used to attack a marginalized body.  Honestly, Wayne Brady should have known better, but I suppose that when the opportunity exists for a Black men to assert their patriarchal rights over a Black woman, it's every man for himself. What is particularly terrible about this video, is that it takes pleasure in reducing some of our most important Black sheroes. These women were all successful in their own right. Instead we were treated to angry, nagging, Black women, who were content to hurt each and other be malicious.

I am further bothered by Coretta telling MLK that their last child was not his.  This is completely inaccurate history.  At no time were their rumours that Coretta was unfaithful to Martin -- and in fact -- he was the one who was routinely unfaithful in their marriage. What was this, but an attempt to slut shame Coretta and to question her sexual fidelity? Yet somehow in this twisted version of history, it is Coretta that is the angry shrew.

Placing these women in a restaurant with a White section, in which Marilyn sat by herself, belittles how terrible it was to live under Jim Crow.  When Rosa refused to move, she was told that she didn't have to refuse to give up her seat every time.  What Ms. Parks did that day, sparked the civil rights movement, and to belittle the bravery that she showed in the face of virulent racism is disgusting.

Finally, having Betty Shabazz pull a gun on Coretta Scott King, while saying the words "by any means necessary" was a complete debasement of she was.  First off, to equate the term by any means necessary with violence is erroneous. Any means -- means just that.  One need not use a gun; it could be by the power of peaceful protest, or a heated debate, and this constant reduction of this phrase, shows the ways in which Malcolm X is still misunderstood.

Portraying Dr Betty Shabazz that way ignored her many accomplishments. She raised six daughter as a single mother, while returning to school to get a doctorate in higher education administration and curriculum development. She was active in the NAACP, and the National Urban League. In 1984, she hosted the New York convention of the National Council of Negro Women.  She formed a relationship with Myrlie-Evers Williams, and the two made joint appearances to maintain the legacy of the civil rights movement.  This incredible woman, is the person, yes I said person, that they decided to reduce to an angry ridiculous caricature.

From start to finish, this entire video was a hot mess.  Comedy does not give free reign to engage in sexism and revisionist history.  In a world in which Black women continually have to fight to be recognized, this video suggests that no matter how hard we work, we are still considered the eternal "other."  If the best amongst us are not entitle to respect, then who is?
Posted by Renee at Friday, February 18, 2011