It looks like the conservatives will use anything to attack Michelle Obama. 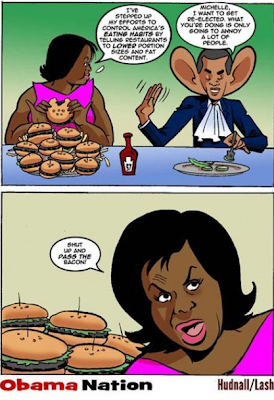 The above cartoon comes from BigGovernment.com.  I am sure the usual defense of satire is being used to justify this latest round of attacks against Michelle Obama.  The FLOTUS is not fat. I absolutely agree that there are problematic aspects to her reducing childhood obesity campaign, but they have nothing to do with her physical body.  What this cartoon is doing, is using fat to shame Michelle Obama into silence.  In the media, there has been continual commentary about her  muscular arms, long legs and shapely figure.  This kind of scrutiny is not unique to Michelle Obama, but in fact is something that all women in the public eye must deal with to varying degrees.

Michelle Obama's plan for reducing childhood obesity does not call for the complete denial of choice.  In fact, if I remember it correctly, on thanksgiving, she specifically encouraged Americans to eat what they wanted.  She has publicly stated her love of french fries.  Michelle's message is everything in moderation, with a good dose of activity for good measure.  Obviously, there are aspects of disableism and classism to this approach that need to be deconstructed however, using fat shaming as legitimate form of protest is in and of itself problematic.

I am further troubled by how the interaction between Michelle and Barack is pictured.  Rather than being supportive of her, he is dismissive and Michelle responds my telling him to "shut up and pass the bacon" (note: that line was originally shut up and pass the lard).  In any interview featuring both Michelle and Barack, what is immediately obvious is their love and respect for each other.  Conservatives have spent a lot of time suggesting that Barack is a lecher, in order to attack his family man image.  This really amounts to a public attack on the Black family.  We are constantly presented with the myth that Black women are lonely, undesirable, and desperate for a man, and this erroneous suggestion, has continued to exist as a truism -- even though there are plenty of Black women who are happily married to Black men.  As long as Michelle and Barack continue to publicly love and respect each other, it flies in the face of the lie that intact, happy, successful families exist.

I also think that it is worth mentioning, that the way the cartoon is drawn, specifically creates Michelle as aggressive.  This plays upon the myth that Black women are 'unwomen,' who over power the men in their lives.  It is a specifically racist, genderized attack against Black women.  Satire should never need to rely on an ism to make a point, and this is exactly what this little cartoon does.

I believe that much of what Michelle has gone through since she became the FLOTUS, has everything to do with the fact that she is a successful Black woman, who refuses to be shamed into taking on many of the racist and sexist characterizations that are attached to her body.  I do recall other first ladies taking flack from the media, for eg., Hilary Clinton, but I have yet to see the acknowledgment of how harmful Nancy Reagan's just say no to drugs campaign was.  She sided with her husband and his racist/classist war on drugs -- yet somehow -- she is deemed as untouchable.  Barbara Bush was often attacked by the media as looking to old, and this was a specific attack on her, for not performing femininity in a way that is considered socially acceptable.  Mrs. Bush's agenda was literacy, and while this was a good program, specifically because it challenged adult illiteracy, it cannot be addressed without specifically tackling the issue of the education system.  The attacks against Mrs. Bush were sexist in nature, but the media never thought to interact with the limitations of her agenda.  This in large part had to do with her class and White privilege.  As far as first ladies go, outside of Hilary Clinton, no other first lady has achieved the kind of consistent negative attacks, that Michelle Obama has had to deal with.

There are those that continually protest that racism and sexism have nothing to do with unrelenting public attacks on Michelle Obama.  What passes for legitimate discourse specifically is meant to punish Michelle Obama for stepping outside of what Whiteness believes is the station of Black women.  Michelle has consistently been constructed as a radical by the right, and in some cases anti-White, because it helps to fan the flames of racists, who believe that the institution of Whiteness is under attack. Cartoons like this cannot simply be dismissed as political fodder, because their express purpose is to remind POC that despite its gains, Whiteness is still very much in control, and is willing to fight for its supremacy through any means necessary.
Posted by Renee at Wednesday, February 16, 2011