Spent: Will Pretending to be Poor, Teach People That it is not a Moral Failing 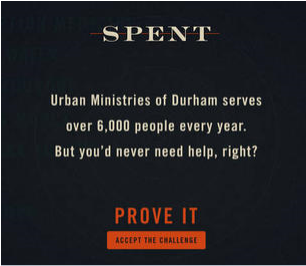 Due to the persistent discourse of meritocracy, many who are homeless or belong to the ranks of the working poor, are simply assumed to be lazy.  The reality of the fact is that capitalism is designed to keep people poor.  The Urban Ministries of North Carolina and the McKinney ad agency have partnered to create a game, to help bring the awareness to the difficult choices that come with living a life of poverty.

Some of the challenges players face are: living far from work to reduce rent, considering shared co-habitation with friends, various low paying jobs, grocery shopping on limited funds, whether or not to take an unpaid sick day, whether or not to discuss joining a union, at the threat of losing one's job, considering whether it is possible to pay for a child's lunch, rather than allowing them to face the stigma of being one of the free lunch kids, helping out family members who need help paying for vital medication, traveling to weddings and funerals, repairs to housing and or vehicles etc,. Everyday life situations like, the inability to work due to illness, transportation, student loans, car payments, rent and food, can quickly deplete one's funds. This is the reality for many people who are under employed, despite the fact that we are told that people just need to work harder.

The game outlines a typical month, and the challenge is to see when given these difficult issues, whether or not you can make it to the end of the month.  For many people, playing this game will not teach them a thing, because the experience of negotiating poverty is an everyday phenomenon for them, however for those who have never been poor and have no idea what it is like, this is a small glimpse into a world that is real for so many people.  This game will not end hunger, or poverty, but hopefully it will help to enlighten those who believe that middle class trappings are the norm, rather than the gut wrenching poverty experienced by millions.

Take the time to play here, and let me know if you have any month left at the end of the month, as well as what difficult compromises you were forced to make.
Posted by Renee at Tuesday, February 22, 2011