When Does Personal and Parental Responsibility Come into Play With Teen Pregnancy?

March 8th is election day for Board District 1of the Los Angeles Unified School District Board of Education.  Marguerite Poindexter LaMotte, is attempting to win a third term.  Living in Canada, I have absolutely no position on the election; however, I would like to discuss some of the political advertising that has been used to attack her. The following image came from Jasmyne Cannick's facebook page. 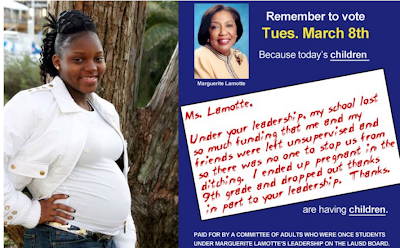 The sign was paid for by a committee of adults, who were once students under Marguerite LaMotte's leadership and it says:
Under your leadership, my school lost so much funding that me and my friends were left unsupervised and so there was no one to stop us from ditching. I ended up pregnant in the ninth grade and dropped out thanks in part to your leadership.  Thanks.
As I said at the beginning of this piece, I have no position on how Ms.Lamotte performs her job, but I certainly do take issue with her being blamed for teen pregnancy.   For years, the right has fought against sex education in schools, free condoms, and most recently is attempting to end federal funding of Planned Parenthood.  How is one woman solely responsible for teen pregnancy, when every step along the way, any attempt to arm teens with the knowledge that they need to make responsible decisions, has been blocked.
Watching this I could not help but wonder where the role of parental responsibility comes in?  The unhusband and I started talking about sex with the boys at the age of three. I remember one incident when my oldest boy came to me in deep concern, because he thought his fish were dying, because he didn't feed them.  It turns out that he was talking about sperm, and so after turning my head to chuckle, I sat down and explained to him.  Every single question that they have ever asked about sex, the unhusband and I have been more than willing to answer.  We have informed them both that they are welcome to come to us at anytime, and that we should be their first source of information.  This is what responsible parenting about sex education is supposed to be about.  You cannot guard your children 24 hours a day, 365 days of the year, but by being honest, you can ensure that when the time comes, whatever decisions they make, will at least be an educated decision. If a teen wants to have sex, nothing will stop it from happening.
The following quote comes from the Guttmacher Institute.

Pregnancy rates among teenagers and young women in the United States rose steadily from the early 1970s to the early 1990s, increasing by about 21% among all women younger than 20 and 17% among women aged 20–24 during those two decades. At the same time, the birthrate among these women remained relatively unchanged until the late 1980s, when it began to rise. From 1973, when abortion was legalized, to 1990, the abortion rate rose substantially.

By 1990 or 1991, the pregnancy rate among teenagers and young women had begun a steady and consistent decline. A decrease in both birth and abortion rates among these women signaled that both intended and unintended pregnancy rates were declining among these age-groups. Recent research concluded that almost all of the decline in the pregnancy rate between 1995 and 2002 among 18–19-year-olds was attributable to increased contraceptive use.1 Among women aged 15–17, about one-quarter of the decline during the same period was attributable to reduced sexual activity and three-quarters to increased contraceptive use.


The problem is so much larger than one woman, and laying it all at her feet, feels very much like scapegoating to me. When it comes to teenage pregnancy, what is absolutely clear is that this is a societal problem, and filling teenage heads with ridiculous abstinence un-education, is not going to help the problem, neither is expecting schools to be defacto babysitters, because parents either don't have the time, or care enough about the situation to behave in a proactive manner.  The end result is that we have babies having babies, who are unprepared for the reality of parenthood, not to mention the fact that teenage bodies are not ready to give birth, thus leading to multiple interventions and complications.


To make matters worse, when these children are born by teenage mothers, there is little to no support in place.  On every level society fails teenage girls and teenage mothers.  We need to do something substantial, if we are going to change the current statistics.  If it means having sex education classes, or handing out prescriptions for the pill and free condoms, then that is what needs to happen.  The future of children is at risk, and blaming one person for a nationwide phenomenon is the equivalent of sticking one's head in the sand like an ostrich pretending that the problem is not real.