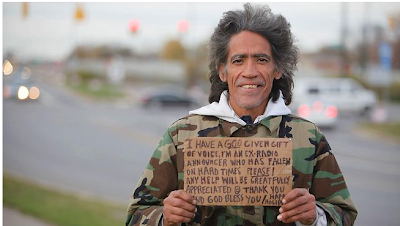 When Ted Williams became an over night success, corporations and the media, were quick to jump on the bandwagon to support him.  It did not take long for his life to quickly spiral downhill.  The Smoking Gun did an expose that featured his criminal history.  The media was quick to round up his family.  It began with his mother saying that she hoped that "he didn't disappoint her again", and then he had an altercation with his daughter.  Of course, Dr. Phil was quick to offer him help, but not until he ripped apart his life on national television, so that he could get his own ratings boost. While drug rehab centers can help a drug addict clean up his act, total rehabilitation will still depend on how the patient lives his life after his rehab stint. Making money off of Ted Williams had always been the goal, and when it appeared that his sobriety was not as he original claimed, it became a race to see who could drop him first.


[I]n the aftermath of his troubled second chance, Williams is still making minor appearances—the Los Angeles Times reports he was recently at a milkshake shop—but Kraft hasn't brought him back, his TV ads have been pulled, and the Cavaliers' job offer has been reneged. He's been abandoned almost as quickly as he was embraced, and for nothing more egregious than any other common celebrity infraction. (source)

When the sponsorship deals first became public, I said that these offers were not about a true second chance, but about capitalizing on this man as quickly as possible.  Is it really surprising that a man who has a history of drug abuse and homelessness, cannot be cleaned up and put on display like he a trained dog?  Helping Williams, requires a real commitment and that is why these companies were more than happy to jump ship as soon as they could. Not being an A list celebrity like Charlie Sheen, Williams descent was shorter and not seen as entertaining.

When I originally heard that he had been dropped, I commented on Facebook that I believe that race had something to do with it.  My opinion has not changed.  How many former drug addicts and sex addicts can we see on television each night.  Yesterday morning, Russel Brand was on The View.  He has certainly been clean for a number of years, but that does not mean that he didn't receive a second chance.  David Duchovney is an admitted sex addict. Robert Downey Jr. has been in and out of jail, due directly to his addiction, yet now he is making movies. Even as he was trashing hotel rooms and going on binge after binge, Charlie Sheen was allowed to keep his 2 million a week job until just recently.  Class privilege certainly played a role their ability to bounce back, but race privilege also means that they were not in the position of Williams, and had an easier time rehabilitating their images. Each of the privileges that these men has amassed, means that dealing with their addiction was easier, and that society was far more willing to give them REPEATED chances.

Let's consider the fact that though there is little disparity in communities of colour and Whiteness using drugs, it is POC who are overly incarcerated. In the case of Marijuana, White people smoke more, yet a simple look at who is arrested, shows a clear disparity. In New York City, 40,000 marijuana possession arrests went on the books in both 2008 and 2007, and 80% of those busted were people of color. When people think about drug addicts or drug dealers, the face of POC is what first comes to mind, not White men -- though we have seen time and time again, that Whiteness does not make one immune from addiction.

The entire rehabilitation of Mr. Williams was a farce from beginning to end. How many times have we seen White celebrities go to rehab, and the media rush to do an interview to capture the  metamorphosis? Blackness is no more the face of drug use than Whiteness, but you would not know that from the way the facts are twisted to once again construct Whiteness as omnipotent. The media was waiting for Mr. Williams to fail, because if they truly cared about his rehabilitation, they never would have taken the path that they did.  No one who lives on the street for a significant length of time, is without issues.  For many, drugs and alcohol are a way to dull the pain. Instead of sitting in judgment of addicts, as the media and various corporations were quick to do,  if they had any kind of empathy, they would have put his needs over and above the desire to make a profit.

I am saddened to know that Williams has lost the various opportunities that came with his 15 minutes of fame, but I hope that now that he is residing in a sober living house, that he can truly begin the process to return to a state of health and well being. It took him a long time to reach the state that he was in the day he was discovered, and it is going to take him a long time to come back from that.  No matter what society believes about success, it is rarely if ever an overnight thing.
Posted by Renee at Wednesday, March 09, 2011