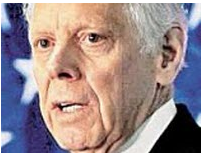 Let me start off this piece by saying, no matter how hard Whiteness works, or how much they invest in hoping that I will learn to hate my Latino brothers and sisters, it is a wasted effort.  Whiteness knows that if it can keep POC focused on attacking each other, rather than recognizing our common enemy, that we will never achieve full equality.  POC need to be aware that more than magicians traffic in slight of hand and misdirection.Western New York Congressional candidate Jack Davis recently decided to do a little divide and conquer, using his supposed concern for the high rates of Black employment.


As a solution to the black unemployment problem, Davis suggested shipping inner-city black youth out to farms, while simultaneously deporting the illegal immigrants who are working there.

The comments were confirmed by several sources who attended a Feb. 20th endorsement interview with Davis:

"We have a huge unemployment problem with black youth in our cities. Put them on buses, take them out there [to the farms] and pay them a decent wage; they will work." (source)

I wonder if he was channeling his inner overseer? He does not even stop to consider whether or not Black youth want these jobs.  I suppose he believes that all Black folk have an inner field hand they are just dying to release.  It is much easier to send these youth off to do physical labour, than to think about the role that racism continues to play in the role of high Black unemployment.   The reason for high Black employment is racism.  It manifests in poor schools, purposeful  under education, and high incarceration rates.  When given the opportunity to hire capable Blacks, Whiteness over and over again gives opportunities to White people.  High unemployment exists not because undocumented workers are taking our jobs, but because Whiteness is determined to deny us the opportunities we need to succeed. There are no hordes of Brown people taking opportunity from us, it is Whiteness.

I also wonder whether he has any idea of what a subsistence wage paid to laborers would do in terms of the cost of food.  Food prices are kept artificially low because of exploited labour and already so many go hungry.  The number of families who are dependent on food stamps continues to increase.  Poor families are often forced to choose between feeding themselves and paying rent. Please note, I am no way arguing the need to continue paying workers a wage that is not a subsistence level, I am simply pointing out that capitalism plays a large role in the continued oppression of all people.  His suggestion makes no sense not only because it serves to foster a division between POC, it will also harm poor White people.

When I see poor White people arguing that undocumented workers are taking American jobs, it never fails to occur to me that once again they are acting against their own best interest.  You see, we live in an interconnected society, and even the smallest of changes effects us all.  We are far more dependent on undocumented workers than most realize, and many industries would collapse or quickly become unaffordable for the average person without their contributions.  All workers need to be able to achieve subsistence, but until we dismantle capitalism this is not a possibility.  People really need to start to think about what they are championing and who inspired this so-called plan of attack. If we allow ourselves to be easily fooled, it is quite certain that it is marginalized bodies, and not rich White men who will pay the price.  Now more than ever we need unity.