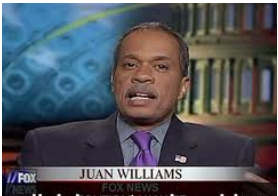 Well, now that Juan Williams has a contract with Fox, I suppose he has to compete with the other resident house Negroes. You know, I retract that statement, because house negroes were in an impossible situation that often meant life or death for them, whereas; Williams is selling out for money. That makes him the lowest of the low.

He recently appeared on The O'Reily Factor with Dr. Caroline Helmand, who is a professor, at Occidental College.  They were originally to discuss New York Congressman Anthony Weiner's rant, when the conversation shifted to the NPR.  The following is the transcript.


Helmand: "I happen to agree with Schiller that your comments were bigoted. I think that if I were to say that I clutch my purse every time I walk by a black man that might resonate with a lot of Americans. It might be the truth but it's a bigoted statement. I certainly wouldn't have fired you but I do think there was some truth in that video that we don't get to talk about because we are afraid to have actual discourse in this country."
Williams: "I can't believe that you just said that. You think that simply saying what you think is evidence of bigotry that all of a sudden it's as if you were walking by a black man that would mean if you were bigoted if you were somewhat nervous. Let me just tell you, with the amount of black on black crime in America, I get nervous and I'm a black man. So, I mean, wait a second..."
Helmand: "There we go again, Juan. I would find that to be racial profiling that's a bigoted comment."
Williams: "That's a bigoted comment?"
Helmand: "Yes it is. Just like your comment about Muslims."
Williams: "I'm the father of black young men and I'm saying that if you saw a couple guys walking around looking like thugs down the street late at night, you're saying 'Oh, I'm not going to think it through.' Caroline, I think you are way off base."


Considering what Williams had to say about Muslims, I suppose it is not really surprising that he would suggest that Black men exist as a threat to all in society.  What I do however wonder, is how he cannot realize that perpetrating this stereotype is going to harm his son?  Black people may be over represented in the prison system; however, there is a direct correlation between that, and the fact that the U.S. is still very much a White supremacist state.  I wonder if Williams is aware that there are currently more White people in prison, than there are any other minority group.  Like it or not, crime does not only happen in communities of colour.

The fact that Williams can express fear of Black men, tells me that he has internalized many of the negative stereotypes of what it is to be Black in America.  One of the ways that Whiteness retains power over people of colour, is by convincing African Americans that they are worth less than Whites.  It is by encouraging the belief that Blacks are secondary citizens and that their best interests lies in working in tandem to support White supremacy, rather than continuing to push for racial equality and in this way, White hegemony continues to be enforced and normalized as good. FOX news claims to have a conservative spin on news, but when we consider that conservatism actually stands for promoting the best interests of the White male ruling class, is it really surprising that a man of colour whose mind has been colonized, would be featured to spread further negative and inaccurate information.  No conversation about Black on Black violence or the criminal rate of POC can occur without directly convicting both capitalism and White supremacy.  FOX however is not a place for nuanced intelligent debate, it is a place to promote false truths.

The other troubling factor in the conversation, is that it was Hellman who had to tell Williams that his comments were bigoted. This puts Hellman into a position to arbitrate what is and is not racist.  How many times have people of colour complained about racist treatment, only to have it ignored or dismissed. If I had a dollar for every time some White person declared something to be decidedly not racist, then I would be a rich woman.  A White person as the arbiter of race is very dangerous indeed, even though in this case she was absolutely right. For Juan to allow her to assume that position, further weakens the arguments of POC when we fight against White supremacy. I suppose now that Juan has found a place at FOX, we can expect more of the same.
Posted by Renee at Wednesday, March 23, 2011