NPR Exec Told The Truth About The Tea Klux Klan-What's The Problem? 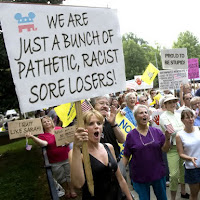 James O'Keefe strikes again.  This conservafool was the spark that got ACORN's federal funding yanked and eventually killed the organization, and now he's seeking to do the same to NPR.

"The current Republican Party is not really the Republican Party. It's been hijacked by this group that is ... not just Islamophobic but, really, xenophobic. They believe in sort of white, middle America, gun-toting — it's scary. They're seriously racist, racist people." 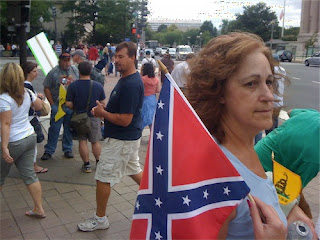 Take all the time you need to answer that question.

And we know you conservafools hate NPR because it does something your conservamedia doesn't do in terms of intelligently cover what's going on politically.

It's too bad NPR CEO Vivian Schiller and Ron Schiller, the person who made the comment are resigning .

But let's get real, Ron Schiller told the truth about the Tea Klux Klan.    Too bad he's going to lose his job over it and it stirs up the conservafools to make another renewed push to strip NPR of its federal funding.
Posted by Renee at Friday, March 11, 2011