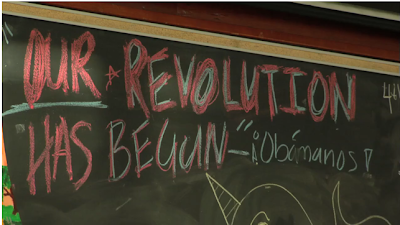 TUSD's ethnic studies program has proved it's worth by the fact that the students who participate are more likely to finish high school and go onto college. The state has charged that the program radicalizes students and encourages anti-American thinking.  The truth of the matter is that to be successful, students of colour need to know their history, and to think critically from a very early age. Society tells these students that they are not worthy and are completely disposable.  Once the history of colonialism and racism is revealed to them why is it unreasonable for these students to be angry.  Once again this is another example of the fact that anger is only considered an appropriate response from Whiteness.  Whiteness is more than willing for kids of colour to fall behind, than admit that it has a history of crimes against people of colour. Part of being American, is admitting America's history and colonialism, it is not anti-American to learn and perpetuate the truth.  To that end, the feature documentary Precious Knowledge has been created.

Editors Note: I don't have time to make a transcript of the video today, but I would really appreciate if someone would make one.

Update: Ari Palos has created a transcript for the video.  Thanks so much!!!


¯Hip  Hop Beat
00:02  Crystal – My history teacher she wouldn’t really pay attention to us and we were like the Mexicans sitting in the back just sitting there because we had to be there.
¯Indigenous Beat
00:14 Espy- Like, I had a teacher freshman year, that would tell me like, “Oh, you’re not going to go to college, you’re not going to do this and this and that.”  Because of the way I dressed and the way I did my makeup and all that.”
00:23 Gilbert – I’m not going to lie, I’ve hated education.
¯Hip Hop Beat
¯1960s guitar
00:29 Rep. Grijalva – Everybody knew that the school system was discriminatory, that we weren’t putting kids in college, that the staffing wasn’t reflective of the community.  It was only a question of time before we started doing what we wanted to do and the first big issue was to say ‘we’re here, and this is our statement.  We are going to push the envelope a little further.’
¯ Mariachi Beat
00:48 Mr. Acosta- Good morning are you looking for M215?  Yes Sir.  That’s my class i’m Mr. Acosta what’s your name?
00:55 Mr. Acosta- Let’s go. (clapping) In Lak ech…
00:58 Mariyah- Ethnic studies is being conscious and aware of what’s going on in your own neighborhood as well as the world.
¯ Mariachi guitar
01:05 Mr. Acosta – You are in a world called Magical Realism.  Why does that make sense that Latin America was the place where this happened?
01:12 Gilbert- Just what they started teaching us was so interesting I just could not stop thinking about it.  I would go home with articles and just read them over and over again.
¯Mariachi Strings
01:24 Mr. Gonzales – Some people are claiming because of Obama being the president now, that we have reached what Martin Luther King died for and that’s the idea that people be judged by the content of their character and not the color of their skin.   Have we reached that?
01:40 Students together – Yes/No.
01:41 Mr. Gonzales – Have we.
01:42 Mr. Gonzales – This class in based on critical thinking, and in that does come, you know, empowerment.
¯Mariachi strings swell.
01:52 Mariyah – At the end of the day you just feel like so much stronger when you learn something.  Like I’m not just talking about math, like if you learn a problem you’re like oh yeah I learned that, but if you are learning an actual moral or something you’ll use every day then you feel so much stronger like a warrior.
2:08 Newscaster – State school superintendent Tom Horne wants to end ethnic studies programs in the Tucson Unified School District.  He’s taking his push to state lawmakers next week, a bill that ban schools from grouping or teaching students based on their ethnic background.
2:23 Mr. Horne – They’re dividing them up what, their race.  I have asked the legislature to pass a bill to prohibit ethnic studies programs and that’s this Senate bill we are talking about.
2:33 Sen. Paton – Whoever has been elected to talk about this program please come forward.
2:38 Mariyah – We go for these classes because people that have graduated and gone to these classes have said nothing but positive things they figured out who they really are as human being they figured out how to handle situations to their best abilities…
2:49 Sen. Pearce – Mr. Chairman, it’s teaching of hate speech, sedition, anti- American, and if people want to pay for that on their own time in their own homes they can be as anti-American as they want.
2:59 Mariyah – It doesn’t teach us to be anti-American it teaches us to embrace America all of its flaws and all.  We invite you to come and see our classes un-announced just so you can get a real sense of what we are talking about.
3:09 Sen. Paton – Members by your vote of four ays, three nays and zero not voting you have given a due pass recommendation.
¯Indigenous drums, conch shells, and flute
3:44 Ak-Chin runner – When we’re running you take your prayers along the way.  What we have to remember is that our culture is what is very powerful.  It drives us.  It’s here even when we’re gone.
03:59 Crystal – We’ll always be united.  No matter how far this bill goes, we are here together in the Lucha.
¯Marching band drums swells throughout
04:07 Sen. Pearce – This is hate speech.  This is anti-American seditious revolutionary talk in a high school.
04:13 Crystal – When they try to take these classes away, it’s something impossible.
04:17 Mr. Arce – We believe it’s a matter of life and death.
04:20 Ms. Dugan – When you have students demonstrating wearing brown shirts, bandanas, this is serious.
04:25 Charles – For someone that has felt so out of place, for the majority of their live, it feels good to… to have a home.
04:32 Sen. Kavanagh – If you want a different culture than fine, go back to that culture.  But this is America.
04:37 Crazy man – You get away from my border!
04:39 Student – This is a public building.
04:40 Policeman – Yeah but you can’t come in here.
04:41 Students – Governor Jan Brewer!

04:44 Chucho-  You hear a lot of talk about La Conquista de Mexico.  But guess what it never happened.  This is proof of that.
04:51 Rep. Montenegro – These programs are aimed at creating dissension.
04:56 Mr. Acosta – You’re beautiful young people, you are smart, you have critical consciousness, you will pick your path for yourself.
05:03 Mr. Gonzales – I think you’re struggle as a human being, to become a good human being has begun and I will always hold you to that.
¯ Crash, then conch shell.
Posted by Renee at Wednesday, March 09, 2011