There Are More Sites of Oppression Than Gender

I normally love reading Sociological Images, and so I was really surprised, when I came across a post that failed to recognize that there are multiple sites of oppression, in favor of centering gender as the prime location of oppression.  To demonstrate the complete domination of male stories, Gwen Sharp posted a series of videos by Feminist Frequency’s Anita Sarkeesian, which examined a list of the movies that have won the best picture award at the oscars. The list is as follows.

At first, the analysis seems quite fair until you begin to think about what some of these movies are about. A Beautiful Mind was released in 2001.  It was directed by Ron Howard and starred Russel Crowe as the mathematician John Nash.  I certainly will not argue the fact that the protagonist was male, but I do think it is simplistic to reduce this to a man's movie.  Crowe played a man that spent a lifetime negotiating schizophrenia.  He is eventually forced to acknowledge that he is not doing top secret work for the government, but has actually had a very serious and sustained break from reality.  The movie ends on a high note when Nash is given the Nobel prize in Economics.


Clearly, A Beautiful Mind is about so much more than gender.  The entire story deals with a man that is neurologically  atypical.  The disabled are routinely erased from main stream media, unless they can be portrayed as super crips, who make it easier for able bodied people to avoid acknowledging their privileges.  In this movie however, Nash is shown negotiating his disability and eventually accepting it as a part of who he is.  The mere fact that the movie is named A Beautiful Mind suggests that being neurologically atypical is not a horrible sentence and that they are capable of just as many wonders as the able bodied.  How can one possibly look at this movie and not see how transgressive it is? Also on the list was Schindler's List.  Even more than A Beautiful Mind, the reduction of Schlinder's List to simply a movie about gender absolutely horrifies me.  Schindler's List was released in 1993. It was directed by Stephen Spielberg and Liam Neeson played the war profiteer turned humanitarian Oskar Schindler. As with A Beautiful Mind,  Schindler's list is based on a real person. It is the story of a man who sought to make money out of supplying the German army during WWII, but watching the horrors that were happening to Jewish people caused him to save over one thousand people.  Thanks to his quick thinking, he was also responsible for the only train to ever leave Auschwitz with people still alive.  His efforts left him penniless and in later life, he was supported by the very same Jewish people that he saved. When he died, he was buried in Israel. Schindler's list  is more than the story about a man.  This is a story about the Holocaust and a man who had the courage to stand up, when so many just fell in line with the status quo. How anyone could look at this movie, and see nothing but the story of a man is beyond me.  I will never forget the incomprehension and rage I felt watching this movie for the first time. Schindler's list encourages us not to forget the horrible evil that was done in the name of antisemitism.

Rain Man was released in 1988. It was directed by Barry Levinson and stared Dustin Hoffman and Tom Cruise.  Dustin and Hoffman played brothers, but what was more important is that Hoffman played the role of Raymond Babbitt, an autistic savant. The story begins with Tom Cruise's character attempting to exploit Dustin's character, but in the end he learns to love him.  This is more than a story of two brothers, simply because one of them is neurologically atypical.  It is once again, one of the few examples in which a disabled character is absolutely central to the story.  He is not mystically cured of his condition, and this is something that often happens in media portrayals of the disabled. I will agree that it is times problematic that the audience is prompted to laugh at him than with him, but it is certainly better than the everyday erasure that happens all to often in the media. 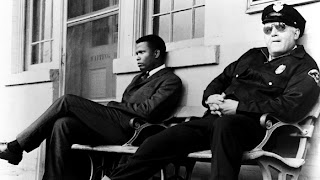 In The Heat of the Night was released in 1967. It was directed by Norman Jewison and it stared Sidney Poitier, Rod Steiger and Warren Oates.  Sharp once again described it as a movie about men, when  in actuality, In the Heat of the Night was far more involved.  First, let's start with the fact that this was an inter racial cast in 1967, with a character of colour in the role of a protagonist. Poitier played detective Tibbs, who eventually solves a murder case that the White Police Chief Bill Gillespie is unable to solve.  Tibbs is originally arrested for murdering the wealthy Philip Colbert, because it is assumed simply because he is Black and has money in his wallet, that he must be guilty.  Despite having to deal with unrelenting racism, Tibbs refuses to be cowed and proves that he is more than competent, thus earning the respect of the racist White Police Chief Bill Gillespie by the end of the movie.  In The Heat of the Night is about combating racism in Mississippi. To ignore the role that race played in the movie, is to erase the difficulties that Blacks faced and continue to face at the hands of White supremacy. In The Heat of the Night serves a visual snapshot of the issues Blacks had to face as integration became the law of the land.

I chose to limit my commentary to the four above movies, simply because I have not seen all of the films on the list; however, even with that fact, I was still able to point to four movies that could not be simplified to being the story of men.  It is very easy to look at oppression and only see gender, because as women, this is something we all face.  There can be no doubt, that even in the movies that I chose to highlight that the protagonists were indeed male, but that should not have erased major parts of their identities to universalize gender oppression in the media.  There are plenty of examples in which the characters are straight, cis gendered, able bodied White men, with no connection to a historical horror.  When we create false narratives to prove a point, not only is this a case of oppression olympics, but it leaves room to doubt the true damage that sexism causes women. Gender does not trump anything, no matter how hard it is to live in a sexist patriarchal world.

I think that feminists find it very easy to fall into the mode of believing that all men have it easy, but we know that because we have institutionalized a hierarchy of bodies, that some men face oppression based in things like race, disability, class, and sexuality. I fail to see how ignoring this moves us any closer to gender parity?  In fact, what it does do is upset potential allies.  I am not saying that women should stop fighting for gender equality, or even suggesting that a man and a woman facing the same oppression experience it equally, but standing outside of any particular oppression and unilateral erasing it, because it is happening to a man rather than a woman is erasure.  If the goal is to achieve an equal society, then we cannot support or ignore any kind of marginalization.

The videos done by Anita Sarkeesian are quite representative of limitation of feminism, as practiced by White women.  I sometimes wonder why they don't print business cards that say for White women only. How many times does this have to be publicly critiqued, before feminists buy a vowel and get a clue?  The videos by Anita Sarkeesian, reminded quite viscerally of the attacks that WOC face when we choose to defend men of colour in feminist spaces.   Despite recognizing the horror of negotiating sexism, White feminists routinely ignore or erase other marginalizations because they believe that it serves the purpose of increasing their social position.  It evidences an ignorance of the way that oppression functions, and a desire to be equal to White masculinity, rather than achieving equality for all.  Many of these movies are far to nuanced to be reduced to the male/female dichotomy, but when you are only determined to interrogate gender, you miss a lot along the way.
Posted by Renee at Tuesday, March 01, 2011