WOC Are More Than A Footnote Bitch Magazine 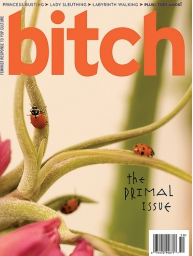 Being a leisurely Saturday morning, I slept in and decided to enjoy my morning green tea while reading the latest issue of Bitch Magazine.  What a terrible way to start the day.  In the latest issue, there is an article called MOTHER HUCKSTER: How the mommy blog became a brand by Sarah McAbee.   I have written about mommy blogging from time to time on Womanist Musings.  I have written repeatedly about the fact that despite my motherhood, this label is denied me.  No matter how much things have changed, the fact that I have two kids and have been a mother for ten years, still makes me a useless breeder in the eyes of Whiteness.

(okay folks, strap on your seat belts, because I'm about to fucking blow)

The entire article is about how White mommy bloggers like Dooce aren't taken seriously, even though they are definitely a brand worth millions.


Despite the complexity of these blogging powerhouses, the mainstream media seems content to categorize them as just, well, moms.  Not professional bloggers, not businesspeople, not brands in and of themselves.  Despite all the potential and power in these women's blogs and the hundreds authored by other women for whom "mother" is just one in a list of identifiers, mommy bloggers - especially those who haven't hit the big time yet - are often confined to an easily caricatured realm.

Oh the poor White women, never mind that amazing Black mommy bloggers are working in obscurity because of racism. How are these rich White mommy bloggers managing, only being able to take home millions of dollars a year?  Can you believe that when they are on Oprah, or The Bonnie Hunt Show, or Good Morning America, that they are asked to make a cake? When, oh when, will White motherhood be taken seriously?  Say it with me everyone: White women's problems.

(Just a moment, I am all overcome. I need a moment to collect myself.  As a WOC it's my job to feel empathy for these poor marginalized White women isn't it?)

To prove that they are not just a White woman's magazine, McAbee decided to quote Arwyn of Raising My Boychick:


"Arwyn of the feminist blog Raising My Boychick, uses Jennifer Mendelsohn's Times article to illustrate how the term is "kyriarchy in action," writing that "the mommy blogger' as described in the NYT is solidly middle class ... she is understood to be straight, by way of being married.  She is assumed to be white, by being both middle class and married."

There you have it folks, amidst all the angsting over the successful White woman not being taken seriously, there is a mention of race and sexuality.  God forbid that they choose a WOC to quote. I think that Arwyn rocks, and I am regular reader of her blog, but WOC are the experts on racism, and lesbian moms are the experts in how sexuality effects their work.  Marginalized mothers get the briefest of mention, and we are not even allowed to speak our truth.  Tell me how this is inclusive.  Tell me how this represents a magazine that is determined to focus on the issues of all women.

Then there is this precious gem:


The "mommy blog" label is also indiscriminately applied to almost any female blogger, who has a family and blogs independently, no matter her site's subject matter.

Say it with me everyone,  BULLSHIT.  Just last year, Babble put out a list of moms on twitter, with the most followers, and only two WOC made the list.  They claimed it wasn't racist erasure, because two WOC made the list, never mind that there were plenty of WOC that were excluded.  They then tried to claim that it was purely a numbers game, but that was proven false, when WOC who were excluded, were proven to have more followers. So tell me again, how any woman who has children is automatically given the label of mommy blogger.

The piece ends with:


The one-size-fits-all category of "mommy blogger" will persist as long as deliberately limited portrayals of personalities like Dooce and The Pioneer Woman define the term. By emphasizing the domestic and ignoring the professional aspects of these figures, the media ensures that even the blogosphere's  mommy moguls fit neatly into the dominant pop culture narrative in which women have to choose between the competing world of family and career/creative work.  Instead, bloggers like Armstrong and Drummond have actually made a business of their home life, blurring the boundaries between the domestic and the public spheres.  Although not every blogger may ever be able to monetize motherhood in the same way, the simple act of blogging - about anything - while female will eventually challenge the current sterotype of the mommy blogger so much that even the media will someday have t get over it.  I'll blog to that.

To prove that they are not a part of the mainstream media that is minimizing women, Bitch decided to include Lisa Factoria-Borchers from My Ecdysis and Mai'a from Guerrilla Mama Medicine in the footnotes.  There you have it folks.  That is Bitch's version of inclusion - putting WOC in the footnotes, while printing an entire article about how the poor rich White women are not being taken seriously. I suppose WOC should be grateful, because lesbian moms, poor moms, disabled moms, and older mom didn't even get a footnote.  For an entity that wants to concern itself with the issues of ALL women, they sure did a great job of erasure.

Honestly, I am sick and tired of this kind of thing occurring. White women as representative of motherhood is racist, and throwing in two women of colour as a footnote, does nothing to make it any less racist. The reason there are no Black Dooce's is because we are still considered irresponsible breeders.  Regan may have called us "welfare queens" in the 80's, but this new supposedly post racial generation, actively continues this mendacious myth with their erasure.

No matter how passionate WOC are, we simply do not get the same opportunities.  Jessica Valenti has been a mother for all of ten seconds, and already she has gotten a deal to write about motherhood.  What the hell could she possibly have to say, that WOC have not been saying for generations?  Tell me again how everyone gets recognized as a mother Bitch. Tell me again, how it is all the fault of the media, which you btw you exclude yourself from with your two ever so inclusive footnotes, and not the fault of the White supremacist state that we live in.

Explain to me why it is when there are plenty of WOC who write critically every day, that not a single one of them has managed to garner the same sort of success as White women.  Do you suppose that all WOC are just shitty writers?  Do you think that it is because we don't know how to market ourselves? Do you think that we are not equally dedicated to the various issues we choose to promote?  There is a simple answer to all of the question I asked, and it is RACISM.  I know that White people avoid that word like the plague, because they have twisted it -- to make it seem as though being called a racist -- is worse than actually being subjected to it, but that is exactly the issue today in the mommy blogging world.  Racism, racism, racism and though you may be loathe to print the truth, I am not loathe to say it, because I live it every damn day of my life.

I encourage you to let Bitch know that erasure is not acceptable by tweeting at @BitchMedia on twitter.  Not only did they print an article filled with racist erasure, they decided not to make it available online, thus making it more difficult to access.  This is the internet Bitch and there is no place to hide.

Update: Bitch has apolgoized via twitter for the erasure in this piece.

If they really believe that WOC were equal this piece would never have made it into the magazine and I would not have spent the better part of Saturday calling them out on their shit via, twitter.  Apologizing after the fact does not make the issue go away.  I would much prefer if White feminists would stop fucking up period.
Posted by Renee at Saturday, March 26, 2011