Black in Latin America: Mexico & Peru: The Black Grandma in the Closet 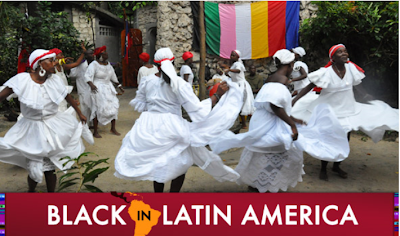 This week Dr. Gates focused on Peru and Mexico. Here is a link to the PBS page where you will be able to watch the episode when they put it up.
In Mexico and Peru, Gates explores the almost unknown history of the significant numbers of black people -- the two countries together received far more slaves than did the United States -- brought to these countries as early as the 16th and 17th centuries, and the worlds of culture that their descendants have created in Vera Cruz on the Gulf of Mexico, the Costa Chica region on the Pacific, and in and around Lima, Peru.

This episode was absolutely fascinating to me.  To be perfectly honest it never occurred to me that there were Black Mexicans, which is probably a ridiculous assumption on my part because of slavery. What I found fascinating was the suggestion that a Black identity is closeted. I was astonished to learn that there are some Blacks who don't even know that they are at least part Black.  This to me shows a real form of self hatred and denial.  It seems that only those that cannot hide their Blackness will ever acknowledge it.

I did find it interesting that many Black Mexicans said that they didn't have a problem with Memin Pinguin, who I find to me extremely racist. One man suggested that the complaints of African Americans were not welcomed on this issue and further suggested that if they wanted to help Blacks that they should be helping to fight for jobs and education.  I understand the need for these things but to me cultural symbols of racism are extremely important to eradicate. I will however acknowledge that if help is something North American Blacks truly wish to offer then we need to listen to the Afro Mexican people and prioritize their needs.

Peru was quite similar to Mexico in its treatment of Blacks.  Dr. Gates pointed to racist characters on television.  One in particular was fashioned after a monkey and he apparently loved raping women and was violent.  This was seen as funny. Blackness was once gain understood to be something that was hidden and not be admitted unless it was impossible to deny.

What I learned from this episode is that Blackness is very much stigmatized in the same way that it is in North America.  Whiteness controls all access to real power and this continues to impoverish Blacks.  Racist stereotypes are used to justify this oppression in much the same way that it is done in North America and it is a direct result of slavery.  It does not matter that racism was never legally institutionalized, because it has always been enforced in these countries, thus creating Blacks as second class citizens.

I loved watching every episode of this series.  It helped to enforce my belief that people of the African Diaspora must educate ourselves about each other, and work together to fight the scourge that is racism.  No matter when slavery ended in our individual countries, we all continue to suffer from its legacy.  We have far more in common than we realize and as history has proven, if we do not band together to demand our rights, Whiteness will never attempt to change.
Posted by Renee at Wednesday, May 11, 2011