Final Thoughts on 'The Vampire Academy' Series by Richelle Mead

A beginning of the week treat from Sparky of Spark in Darkness
This is your official spoiler warning
Okay, let's have one big review of the Vampire Academy Series by Richelle Mead, now that I have finally finished the 6th book, the Last Sacrifice.
Now I am normally a very very wordy person, but even I have limits of my repetition, so my review of the first book is here and my review of the series up to book 6 is  here. Both are on our Tumblr,  Fangs for the Fantasy, which is all about Urban Fantasy.
Now to the 6th book and general social justice musings related to the book. 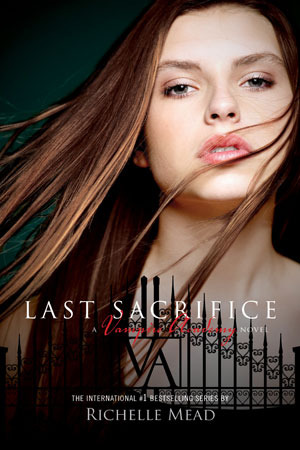 Firstly on the book - well sadly to begin with I have to take away some of the praise I had for the series in my last review:
The canon is now groaning in pain and Rose's actions are just becoming less and less reasonable and less and less excusable.
First of all I have to look at Victor Daschkov again. The villain from the first book, Lissa's worst fear who Rose randomly frees from prison on a virtual freaking whim.
Anyway, he's dying from a degenerative, chronic, terminal disease. The whole point of the first book was Lissa and Rose fled from school to escape him - and later he kidnaps Lissa and tortures her to force her to heal him.
Do you know what's a shame? If Victor knew another spirit user - a powerful healer who could return Strigoi from the dead. Even better, if this spirit user was a devoted relative, like a brother, who loved and adored him and would do anything for him
Why hey there Robert, Victor's devoted spirit-using half brother! Where did you come from?
Shall we just shred the first book and assume Victor was in prison for littering or something? I mean, once you remove this pointless plot there's literally nothing else left in Vampire Academy.
And Rose is getting on my last nerve. A lot of her poor decision making has been blamed on an anti-authoritarian streak (despite being raised by the school with virtual dhampire brainwashing), a bad temper and the leaking badness of spirit - and MAYBE, MAYBE that would explain her doing things like randomly punching people, or the time she swore at the Queen. Maybe (and "explain" doesn't mean it becomes any less annoying).
But, frankly, a lot of her actions just come down to ridiculously foolish decision making. Yes, Rose has won a Clary award for sheer, dazzling mind-numbing stupidity. From ignoring orders, to breaking out high security prisoners and letting them go, to leaving strigoi alive, to running away from those who rescued her from prison, to.. well just about every damn decision she has ever made.
The sheer number of ridiculous things Rose does has become beyond stunning. And, perhaps more annoying, there is never any consequences for that. And this is an author trope I am coming to loathe. You have your protag have a ridiculous idea, something that probably will go wrong, something that probably SHOULD go wrong, something based on a guess or judgement they couldn't possibly know, something they shouldn't be able to do - and DING it turns out okay!
And this has it in spades. A teenager shouldn't head off looking for someone in a country she doesn't even know - in SIBERIA  - and it work out. Three teenagers shouldn't be able to break a major criminal from a maximum security prison. Running around cross country to find a long lost sibling you know nothing about shouldn't happen. But through convoluted coincidences, great luck and a lot of not giving a shit about anyone else (seriously, I've lost count of the lives lost, lives ruined, reputations destroyed by Rose lumbering around like a rabid bull in a very very expensive china shop)
On the plus side, I will say that the pacing picked up a lot in this book. I really felt like reading this one rather than skipping and skimming through the boring fluff and padding. So it was much less of a chore to read, I guess. But in general my opinion of the series remains the same as it was in the last review. Interesting story - but the pacing completely ruins it. Even though the pacing picks up in book 6, the character fails drag it down again.
I can't recommend this series. I just can't - if the pacing were picked up and it were maybe condensed into a trilogy, maybe, with caveats about annoying (albeit common) character tropes. But with the pacing as it is, I say it's just too much effort to read.
From a social justice standpoint.... well, it's very white, straight and cis. Marginalised people are just non-existent. Rose is half-Turkish but it's in a classic "my father was X and but I never knew him so have no sense of culture or experience, but here's an 'exotic' feature" which we've seen in Patricia Briggs and Laurell K Hamilton -in this case, Rose has really dark hair. We even meet Rose's father, Ibrahim Muzur. But not much - and they change his name to the much less threatening "Abe". The teenagers are all gender segregated (poorly and ineffectually) to prevent the nookie (because nookie only happens between the opposite sex) though much nookie takes place. Oh and slut shaming abounds.
I had been hopeful, because the book began with a decent appraisal of class. Moroi society is classist in the extreme as I mentioned in the first book review. They depend on so many people to survive - the Dhampires, the Guardians, the Feeders, the non-royal Moroi. And I hoped, I really did hope, that all of this would be addressed. I hoped because some characters at least seemed vaguely aware - but no. Nope, it was never addressed, the fail remained.
So yeah, basically I wish I had more positive to say about this series. They came highly recommended and I wanted to like them and there are good nuggets in them. But overall? I cannot recommend them, though they're not worse the slog.
Posted by Renee at Monday, May 16, 2011