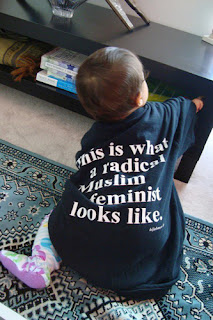 When our breastfeeding relationship began, Eryn would cough and sputter and hit me – upset at the lack of flow or overwhelmed when it was too much. A few months later, she went on a nursing strike and I had to cajole her into feeding by coming up with gravity defying, acrobatic holding positions. Then when she got teeth, I painfully received the message each.and.every.time she wanted to be outside exploring the grass instead of nursing – which soon stopped once I figured out that we could do both.

Now that she’s communicating verbally, sometimes nursing is blech along with spinach, lemons and peas. And sometimes it’s so important to her, that she performs her nyum-na dance, twirling and shaking her bottom when I come home from work. She pats, caresses and snuggles my chest. She smiles and laughs, gets comfortable and waits patiently for me to undress. I tell her stories and she pats my face and sighs contentedly. In stressful or new situations, a quick check-in with my breasts gives her the confidence to explore and make new friends without me by her side. And just this week, we survived another hallucination-induced fever, when breast milk was the only thing she ate for days.

The ease, comfort and connection we have through nursing greatly outweigh any bumps we’ve had along the way. It's an arrangement that works for our little family – and I’ve always given her the opportunity to engage or stop whenever she wants. She loves nursing, and I don’t see her giving it up any time soon.

Much to the consternation of some family, friends and complete strangers.

I didn't blink the first time I heard that the Qur’an recommends breastfeeding until the age of two. It was something that just didn’t apply to a childless, single academic, so I filed it away as an interesting fact and never bothered exploring this aspect of Islamic jurisprudence.

So I was completely flabbergasted when upon getting married, having a baby and choosing to breastfeed, I was told that nursing past the age of two is haraam, or forbidden.

Calling something haraam is serious business. It's not something you mess around with when it comes to religion. Labeling something haraam has the power to remove women from participating in the public sphere, results in the destruction of ancient monuments, prohibits music and art and becomes religious justification for persecution and oppression. It is a powerful word.

The Qur’an and prophetic traditions set out what constitutes forbidden actions or foods – suggesting that transgressions could result in a fiery afterlife. But even transgressions are open to interpretation and allowances, so while it's haraam to eat pork, if you’re on a deserted island and bacon is the only food available, you’re not held accountable for doing what you need to survive. Some transgressions, like extra-marital relations have less leeway in the public eye – especially when interpretations of what constitutes extra-marital relations become conflated with politics, culture and family honour.
So usually when someone tells you that what you’re doing is haraam, even with the best intentions at heart, they're really saying that you're going to hell.

The older Eryn got, the more people made note of her age to me and tapped their watches saying, “She’s almost two! When are you weaning?” I gave noncommittal responses, saying that I'd wean when she was ready. People judged that my milk was now just like water anyway, so nursing wasn’t necessary. Comfort, personal preference and antibodies were thrown out the window. The Qur’an says that the “period of nursing” is two years. No more. What you are doing is forbidden.

When I recently got into a heated debate with a close relative on the matter, I shut down. If nursing Eryn was going to upset God, then so be it. Knowing that the Prophet was nursed by four women, that there are fantastic parables of toddlers speaking wisdom while nursing, and knowing that nursing is not only recommended in Islam, but that reward is given for every mouthful of milk swallowed – I found the haraam claim ludicrous and decided to finally look into the matter.

Breastfeeding in the Qur’an is mentioned during the story of Moses, when the Pharaoh's wife orders his own mother to become his wet-nurse and is also noted as a sign of the apocalypse – when breastfeeding mothers will forget to nurse their children. It is also referred to as a time of hardship and dependency and therefore, a reason children should respect their parents (31:14, 46:15). Nursing relationships are also used to determine marriageable partners – namely, any child your mother nurses becomes your sibling and are therefore un-marriageable, even if you're not blood related. Which really throws a wrench into milk banks and finding out years later you're in love with your breast-sibling.

The idea that the breastfeeding relationship must end at the age of two often comes from two specific verses mentioning nursing in the context of divorce rights (2:233, 65:6). Women who “wish to complete the period of nursing for up to two years," are granted the right to care for their child – during which, their ex-spouse must provide food, clothing and shelter for them. Those who have difficulties nursing or who decide not to nurse, can in consultation with their ex-spouse, choose a wet-nurse for their baby.
Almost every "stop nursing" person I've spoken to refers to these verses. And unfortunately, most of the pro-breastfeeding, Islamic websites obsess over the two-year mark – claiming that breastfeeding is a requirement that must stop by age two. I find it amazing that verses outlining the rights of women during divorce proceedings have become so prolific and influential in determining the length of the breastfeeding relationship for others. Especially since scholars have provided religious rulings saying that breastfeeding is permissible from 30 months to seven years and that breastfeeding is simply recommended for those who are able.


The focus on the two years has the potential to be a religious "booby trap," preventing some women from even attempting breastfeeding and discouraging others from continuing their breastfeeding relationship. I've had conversations with women who told me they didn't even attempt breastfeeding, feeling that they could never fulfill the two-year requirement. One woman I spoke to told me that it breaks her heart when her toddler asks to kiss her chest goodnight – and the only thing that kept her from continuing nursing into toddlerhood was the threat of falling into sin.

This issue bothers me, not only because of my personal investment, but because like so many other issues, these few verses have become a focal point in the external determination of women's bodies. It's problematic if women are actively changing their relationship with their children based upon a misinterpretation of the religious text. Especially since starting, stopping or continuing breastfeeding is a deeply personal decision.

Some may feel that what I'm doing is wrong or selfish – but at a time when scholars debate circumventing gender segregation by asking women to breastfeed adult men, do not dare to harass me about nursing my two-year old. For me, breastfeeding is important because it’s what the women in my family did and because I recognize its health benefits. Learning that positive references to breastfeeding are found in the Qur’an and prophetic traditions was a bonus.

No one should be made to feel that breastfeeding is a sin or such a lofty hardship and duty that it's not even worth attempting.
Posted by Renee at Thursday, June 16, 2011