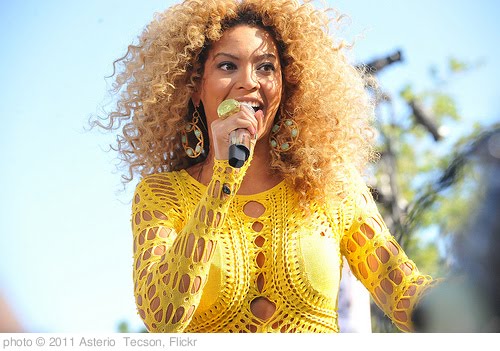 I love me some Bey Bey, but this is just wrong:


In the new issue of Harper's Bazaar UK, Queen B talks about the importance of female friendships and her admiration for her BFF Gwynnie.

She says: "She pushes her boundaries all the time. You go to her house and she makes you feel like you never want to go home. She is what I strive to be one day."

Beyonce also explains why she and her husband Jay Z have become great friends with Gwyneth and Chris Martin.

"We have very similar values," she says. "We have also been able to become each other's support systems over the years, as none of us needs anything from the other."

And if that were not enough, she followed it up with this:


But despite being one of the most successful women in the entertainment industry, Beyonce is reluctant to label herself a feminist.

She says: "I don't really fell that it's necessary to define it. It's just something that's kind of natural for me, and I feel like... you know... it's like, what I live for. I need to find a catchy new word for 'feminism', right? Like 'bootylicious'..."

Okay, let's start with admiration of Paltrow.  When I first read this, my initial though was has she never read GOOP and realized that Paltrow is completely out of touch with the lives of poor women and still seeks to set up her life as some kind of standard?  This is the same woman who talks about ingredients that many have never heard of nevermind have the ability to afford as though this is the most natural thing in the world.  If doubt it, have a look at this week's newsletter (heaven forbid she say blog post) where Paltrow is busy selling shorts/swim trunks for  250$ and 195$ respectively. Not to worry though you can get a 15% discount just for being a GOOP reader.  Selling high price stuff is not what I take issue with.  I take issue with the fact that Paltrow presents herself as some kind of every woman with no recognition of her race, class, able bodied, heterosexual privilege.  I see nothing positive about her and cannot imagine how she could in anyway function as a role model.


On to feminism.  As a WOC I can understand not wanting to take on the label of feminist, I have after all eschewed it myself. I also understand the rejection of feminism because of classism, lesbophobia, transphobia, etc., but once again none of these issues were mentioned by Beyonce.   I further agree that it's not necessary to take on any label period but Beyonce doesn't bother to elaborate as to why she has made this choice.  It actually reminds me of all those who say, I'm not a feminist but....yeah but they want to be taken seriously, have access to reproductive health, equal pay for equal work etc and etc.

For me, the real problem arises when she suggests that feminism should be renamed "bootylicious".  Hold onto your hats y'all, I'm about to stick up for feminism.  Sex positive feminism is very important because it asserts the right to bodily integrity, as well affirms that women should not be slut shamed for being sexual beings.  It encourages women to seek out orgasms and demand satisfaction however they may find it sexually.  This is all a very positive thing, but feminism cannot and should not be reduced to simply just this. Ideally, feminism is meant to encompass every situation and stage in a woman's life, that it often falls far short of this lofty goal is an issue, but not a subject that Beyonce sought to engage with.

What Beyonce is suggesting in my mind barely falls into the category of women's activism.  It is not a difficult thing these days with a body like hers, to go out on stage, wearing barely anything and dance provocatively.  Even her recent release Run the World (Girls), falls very short of the mark because it does not engage with the many ways in which girls and women are still actively oppressed.  In fact, it sends the opposite women by suggesting a form of social power that absolutely does not exist. I suppose she thought that this was an empowering anthem but for me it tells that she has not deeply engaged in ideas but forth by the very feminism she claims comes naturally to her.

I recognize that not everyone has had the benefit of WISE (women's studies) the way that I have, but anyone should be able to recognize when they have not learned enough about subject to speak competently about it. Reducing any kind of women's activism to bootylicious is beyond problematic and it encourages people not to take it seriously.  Women's activism is about making lives better for all women and for many who are determined to continue patriarchal control of women's bodies this idea is dangerous.  There are far too many who are ready to declare a post feminist world under the guise of sexism being a thing of the past and that is yet another reason bootylicious is inappropriate.  It reduces women's concerns to something cutesy and fun, when in many cases it is literally a matter of life and death.

I sincerely hope that Beyonce will take the time to engage with real feminist ideas and make an educated decision as to whether or not feminism is a label which suits or moral and political position rather than crass declarations that are absolutely meaningless.  I think that women deserve more than this and for all the faults of feminism, the label itself deserves more respect than the way that Beyonce is choosing to represent it.
Posted by Renee at Friday, August 05, 2011