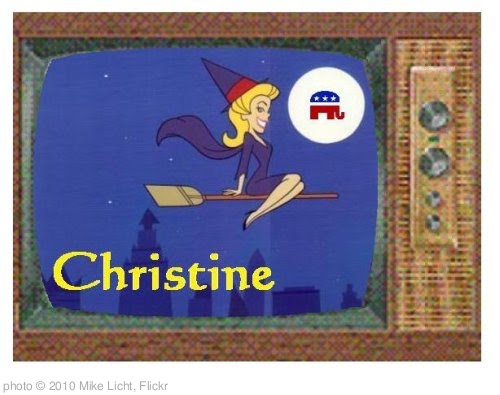 I absolutely loathe Piers Morgan and I fully believe that he is smarmy, and has an inflated ego. This is why it irks me beyond belief that O'Donnell has put me in the position to have to defend this horrid man.  By now you are aware that when O'Donnell appeared on the Piers Morgan Show to promote her new book Trouble Maker, that she walked off set.  For those that haven't seen it, the video is below.


As a public person anything that O'Donnell has said is fair game.  She in fact affirmed that she did discuss same sex marriage and DADT in her book, and so the idea that Piers did not have the right to question her about this is ludicrous. In fact, what Piers did was what any journalist worth their salt would have done (lord how it hurts me to suggest that Piers is a good journalist).  In the tradition of Republican women before her, O'Donnell goes into complete denial of the validity of the question because of her desire to avoid talking about the issue (think all of the taunts of gotcha when Palin was asked about the Bush doctrine, which BTW I a Canadian knew the answer to)

Instead of admitting that she should not have listened to her handlers, O'Donnell has decided to suggest that Morgan was harassing her.

She was so upset from those questions that she realized the interview had little chance of getting back on track.

"When they're sitting there pressing you on personal intimate questions and you're saying, 'I don't want to go there,' he could have said, 'What's your mother's name?' and I would have been like, 'Come on, let's stop!' I wanted to stop that borderline sexual harassment that was going on. It was inappropriate and he wasn't stopping."

She said it had nothing to do with the issue of gay marriage or gay rights. (She says her position is that states and churches have the right to decide how to handle such issues for themselves.) "It really is not about that question, it was about he put me in a position that was very awkward and very uncomfortable and we were late."

She said that "very inappropriate, creepy line of questioning" would never have been directed at a man. When the interviewer pointed out that these were issues that O'Donnell had written about in her book -- "Trouble Maker" -- which was the very book that she was promoting on the show, O'Donnell said there was a keen distinction that was being overlooked.

"I addressed the questions [in the book] and I put it in context that, 'No, I would not do that interview again.'" Morgan, she said, took it one step beyond, and started making the queries personal -- and in the present tense, with questions that "[go] into a personal nature and start prying."

The same would never happen with a man, she said. (source)


Here's the thing, sexism has been used to attack and debase Republican women.  The most recent example was the glee and innuendo aimed at Bachman because of a photo taken of her eating a corndog. All women in politics must negotiate sexism, because we live in patriarchal world and that is why using it as an excuse to defend her refusal to respond to basic questions is unforgivable.

There is no doubt that Pierce is privileged in many ways, but asking her about the contents of her book does not amount to sexual harassment.  It is further disingenuous to claim that no man would have been treated like that.  If you doubt that, look at some of the press that Rick Santorum has received recently.  Dan Savage even went as far to google bomb Santorum, creating a new definition of his name.  For those don't know, Santorum is: a frothy mix of lube and fecal matter that is sometimes the by-product of anal sex.  Personally, I think that O'Donnell is upset that she didn't have a food item to stick in her mouth to avoid answering the question, the way that Rick Perry recently did.

None of Morgan's question were sexually leading, nor did they reduce her based on her gender and in fact, they only asked her to confirm what she has said repeatedly in public.  In this case, O'Donnell is using sexual harassment and sexism as an excuse, which in turn demeans the efforts of professional women to be taken seriously and not be reduced based in gender. I am generally against questioning someone who claims to be victimized however, in this case, the evidence is absolutely clear. Not only does sexism or sexual harassment not serve as an adequate defense for her walking off the show to find a more friendly audience, it makes it seem as though women who complain about sexism or sexual harassment are over reaching or are simply too sensitive.

This also serves as yet another incident of republican women co-opting the issues and language of genuine women's activists.  They don't want to support the project of dismantling patriarchy and have gained from the efforts of second and third wave feminists, as well as womanists, but the moment that they have the opportunity to gain through appropriation, suddenly it is okay to deal with women's issues. I never had much respect for O'Donnell and have even less now that she has put me in the position of defending Piers (ignorant running mouth) Morgan.  Claiming sexual harassment should never come down to political maneuvering because it is wrong, and sets the project for equality behind.