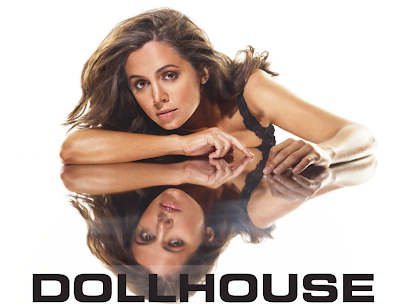 I knew that it's been awhile since by last review but honestly, there is only so much Dollhouse that I can take at any given time.  In this episode, Echo is used to infiltrate a cult because of a note claiming that people are being kept against their will.  I suppose that the viewer was meant to see the irony of someone who cannot consent, rushing off to save someone who is being denied consent, but it once again fell flat for me.

My first issue with the story begins with the intention to purposefully use Echo's eyes as a camera, while in the process making her blind. Ivy does her best to point out the danger that they are placing Echo in by saying, "there have been instances of this technology causing aneurisms and in one case death.  It's possible one good sneeze could bring on a seizure."  It's a true testament to how little Echo is valued, because Adelle responds with, "the risks have been determined to be within acceptable margins. How soon can she be read?"  Echo is considered to be one of their best dolls however, risking her death, or permanent injury to do a favor for a senator, is seen as perfectly acceptable.  The fact that it is a woman calling the shots, does not make the issue of a lack of consent any less troubling.

As a disabled person, I also find it extremely problematic to turn disability into a tool, because it obscures the ableism that people must face everyday.Though the choice was not made by Echo herself, an active choice was made by Whedon to take this approach.  Blindness is not a condition that one can choose or not choose at will, and when we consider that at this point in the show that there hasn't been a single disabled character, this episode is a mockery of our lived experience.
Read more
Posted by Renee at Thursday, August 25, 2011