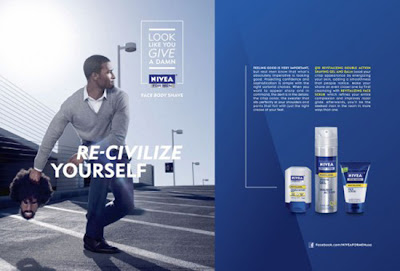 That above image is racism in action folks.  The head that the man is throwing away has a beautiful curly afro and the face that it supposedly not civilized tells us that Black folks must make sure that the appearance as Euro-centric as possible to be considered acceptable. The claim that he didn't care about himself with his afro is an insinuation that daring to be your natural self is a reflection of low self esteem when the opposite is in fact true.
The afro is threatening simply because it is a product of the Black love movement that began in the 60's.  During that time, wearing a gravity defying afro was considered a symbol of embracing Blackness and a pride in being Black.  Whiteness has always rejected this approach because a colonized mind is easier to rule.  To be clear, an Afro is seen specifically as threatening.
I am sure that Nivea is going to respond with the usual, we didn't mean to be racist, we didn't know it was race and if anyone is offended we apologize routine. The faux apology has become a staple of big business when they mess up. The problem with this approach is that it minimizes the harm that has been done, and I cannot for the life of me understand how anyone can look at the above image and not see the implicit racism.
I suppose that for some people oppression is absolutely normalized but the fact that it is normalized means that their is a sickness in society - a sickness that must be rooted out. I wonder about the people who will see this advertisement and not discern the racist undertones.   I want to blame the fact that our lives are over saturated with advertisements but deep down I know that this one will be ignored specifically because it furthers the project of White supremacy. The passive acceptance of racism has become far to acceptable.  Most recognize that if they wear their White sheets in public, or say the N word that they are being actively racist, but the acceptance of images like this advertisement, without any critical thought on how it positions Whiteness juxtaposed to Blackness is just as racist.  You need not become a skinhead, or go to KKK rallys to marginalize people, a simple failure to be aware of the ways in which your acceptance perpetuates racism is enough.
I know that when I read the comments on this piece, there will be plenty of agreement that the image is indeed racist, and that will be deemed a suitable response, but to me it will fall far short, because placid agreement does not require great analysis.  If you are White, simply looking at the image will not cost you or harm you in anyway and yet for me, it represents shackling my very identity to Eurocentric ideals to be viewed as even remotely human. Sometimes the answer to the question of impact is not what, but why and how.  Why do you benefit, and how can you bring about change? Just as Whiteness is institutionalized, it is also an actively learned phenomena and to challenge it, one must actively unlearn its basic principals. This time I challenge you not to simply agree with me, but to tell me the why and the how, because that is what really matters.
Posted by Renee at Thursday, August 18, 2011