The Great Popcorn Cuss Out 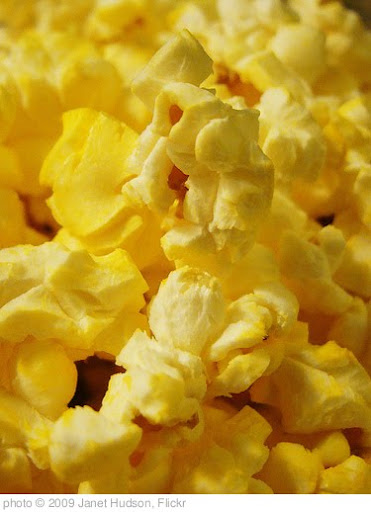 A few days ago the unhusband went shopping with the kids.  When they returned it was clear that Destruction was very upset.  When I asked him what was the matter he answered, "he bought no name popcorn mom, who does that?  He is just so cheap?"  I laughed and let it go thinking it was no big deal, however a few days later the popcorn would become a huge issue.

When the kids asked for a snack, I told them to go ahead make the popcorn.  A few minutes later they both came back into the living room announcing that the popcorn would not pop.  "It's because it's no name," Destruction said.  "This is what happens when you are cheap."  The unhusband quickly reached into his pocket and gave Destruction five dollars to go the store and get a snack to share with his brother.  While Destruction was at the store, Mayhem decided that he had to add his two cents to the occasion.  I will never forget watching my five year old who stands three foot nothing cuss out his father who stands six feet tall.  I was absolutely roaring with laughter as the unhusband stood there not saying a word with eyes downcast as the baby gave him what for.

I was just reaching the point where I thought that I would just burst if I didn't stop laughing when Destruction came back from the store and pushed me right over the edge.  "You do realise that if you had just bought the good popcorn to begin with you would not have had to give me five dollars," he said. "You didn't actually save a dime. Cheap, cheap, cheap and this is what cheapness gets you."  I absolutely roared as once again the unhusband took his cuss out without saying a word.


A few days later, I decided to share this incident with friends, figuring that we would share a laugh over this incident, but I was very wrong.  It seems that they thought that Destruction was way out of line and did not know his place.  I strongly disagreed and was subsequently told, "whatever happened to the days when kids were seen and not heard?"  I must admit that though I should not have been shocked, I absolutely was.

Today we believe that children have more freedom than they ever had, and yet the seen and not heard philosophy is still in existence.  Freedom means that the voice of children would not be so easily discounted, or out right silenced the moment they become inconvenient, and as we all know, this is not the case. So much for the special class that children supposedly belong to.

What I cannot understand is how people can continually fail to recognize that if we do not empower their speech, and ideas at an early age, they will not magically gain the ability to relate to others or deal with difficult situations at the age of 18.  I know that relating to children can be difficult, because they are not necessarily concise or on point, as Sparky has come to discover in his almost nightly conversations with Mayhem, but they are without a doubt rewarding.  Just as children have a lot to learn, they also have a lot to teach us and discounting this simple truth is ageist.

Being a parent is about so much more than providing food, clothing and shelter; it's about relationships.  I have known Destruction for ten years and I have grown to respect and cherish him as a little person.  The same is true of his little brother Mayhem. Parenting is about relationships, and if you expect to have a good one with your children, the first step is to listen to them, because through listening you will get to know who they are, what they believe in, what their interests are etc., Truly listening leads to great conversations and creates a foundation that will not suddenly appear if you only decide to respect their personhood at the age of 18.  I don't always agree with what Destruction has to say, but I always validate him when he is right, and I am not afraid to admit when I am wrong.  Doing this has helped to build both his confidence and his self-esteem.

The idea that children need to learn their place only teaches coercive hierarchy and it is counter productive to raising kids who openly challenge privilege and think critically. Authoritarian parenting is so easy to do, because it is the model under which most of us are raised under.  Many see nothing wrong with it because hey, they turned out fine.  It takes patience and true will power to step away from this model, but the rewards more than make up for it.  Children can be reasoned with, and they understand far more than we give them credit for.  Many of the ideas I regularly engage with, in conversations with Destruction like sexism, racism, gender and sexuality are not above his understanding, and he has in fact added insight and nuance to these conversations that teach me, because from the very beginning we have taught him to think and allowed him to be heard.

Today, there is so much pressure to make sure that kids get into the right preschool and their after school hours are filled with events, clubs and activities, that people have lost sight of the idea that just sitting down and conversing with children can not only be rewarding, but it can achieve exactly the same results, as the right preschool and after school activities. Even when talking to your children makes you uncomfortable, as it most certainly did for the unhusband in the great popcorn cuss out, lessons are imparted that last a lifetime.  Nurture means more than a kiss and cookie, it mean validating them as people and all children deserve that.