The Keepers of God's Word 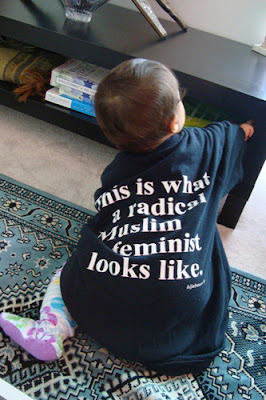 Out of the darkened room, a single light glows.

Her clear voice commands my full attention. The recitation folds in over itself, echoing and reverberating. I'm transported from a tiny New York apartment to a concert hall – as if I'm experiencing a live event instead of a digital recording from a computer.

Everything around me disappears.
Min sharril waswasil khan-nas… Alladhi yu-waswisu fee sudoorin-nas… Minal jinnati wan-nas.1
It's beautiful. I have chills and her voice tugs at my soul. It's ethereal and the feelings the recitation invoke of me are ineffable. I'm frozen in this one moment of praising God.

Suddenly, a voice from the audience: WOO!

My senses snap back and I snicker. Excited by the awesomeness of the recitation, a concert-goer shouts out his appreciation. Packaged in that one WOO, I could hear a giddiness, fan excitement and maybe even a touch of exoticism upon hearing Arabic erupt from the sound mixer. I'd like to imagine he slapped his thigh and thought, “oh man, this is my favourite Qur’anic verse!” But after speaking with the performing artist, I know that he was probably just an unknown factor in a crowd, sharing his appreciation of music.

Last month I had the unusual opportunity to speak with Sajida Jalalzai – by day a brilliant PhD student at Columbia University and by night a talented trip-hop, indie singer with the New York band A Bit Cagey.

I was intrigued when I heard that she opened a recent concert with the recitation of the Qur'an.
While it's not surprising to hear that a practicing Muslim would want to begin an event by evoking the sacred text, even during a non-religious event – some would definitely be surprised to hear that a female artist recited the Qur'an in front of a mixed gender audience:


I know that I don't really reflect the "norm" of Islamic etiquette, but I have absolutely no problem with women reciting Qur'an in front of non-mahrem.
The first divine injunction given to the Prophet Muhammad via the angel Gabriel was to "recite," and I think that this is both a privilege and charge given to every Muslim, both men and women. I think that if a man is sexually aroused by a woman reciting a holy scripture, he's got more problems than I can help him with.

Over 1, 400 years ago in the month of Ramadan, the first verse of the Qur’an was revealed, "Recite! Read in the name of your Lord who created you..." (96:1) And ever since then, Muslims have been reading the Qur’an in melodious and breathtaking recitations.

The recitation of the Qur’an is an art form. Children as young as five are enrolled in special schools to learn tajweed, the rules and guidelines on how to perfect pronunciation and chanting melodies. People commit a few verses, vast portions, or the entire Qur’an to memory. During Ramadan, congregations hold special evening prayers – aiming to complete the entire scripture before the end of the month. And at special events, like weddings, births, funerals, blessings and at the start of just about any formal event, those who are especially skilled in the recitation are asked to entertain the audience. The Qur'an is at the centre of the Islamic faith.

The very best reciters become world famous, winning international competitions, traveling from mosque to mosque, creating a fan-base of groupies and needing a massive promotional machine to handle all of the record deals and music videos. They become walking, talking, living Qur’ans.
Unfortunately, women are rarely are the celebrated keepers of God's word.

During the early Islamic community women played integral roles in preserving the Qur’an, either protecting and maintaining physical copies or becoming authoritative Qur’anic scholars. Today there are only a few women known for their recitation and renowned for their unique talents – and certainly not to the level of fame that their male counterparts enjoy.

Some Muslim etiquette calls for women to recite only in front of other women and never in front of non-mahrem or unrelated male family members. Many women who want to learn tajweed have to seek out the few female teachers who tutor students from their homes, or join the rare mosque program when a skilled female teacher can be found. And even then, learning is largely limited because there is no economic support allowing women to build a career out of reciting the Qur'an.

Otherwise women are encouraged to recite quietly in the mosque (and not to be overheard) or learn to recite at home by listening to any of the 300+ ubiquitous male superstars on easily accessible and profitable CDs, DVDs and mp3 downloads.

Part of the reason for this exclusion comes from a specific interpretation of a Qur’anic verse extolling the wives of the Prophet not to be “soft in speech” lest their voices tempt hearts that are easily moved by desire (33:32). Culture also plays a huge role – so does tradition. This results in people interpreting the verse to say that all women cannot recite in front of men due to the natural, alluring charms of their voice.

When I asked Sajida how this belief factored into how she interpreted the WOO! she said that it really didn't bother her:

It would be one thing to experience that reaction while reciting the Qur'an in front of a Muslim audience, but you can't expect non-Muslims to be cognizant of the kind of respect that insiders would give to the recitation. I didn't begin my performance with the Qur'anic recitation for the sake of those in attendance, but because it was meaningful for me to start the concert with a prayer to God. The "woo" guy was simply voicing his appreciation on a musical level, but personally, I had a deeper spiritual intention than simply singing a pretty "concert opener."

Some popular exceptions to the vast collection of male reciters include a small handful of female stars who recite in front of male judges, mixed audiences, come from supportive communities or who make their recitations available online. In 1964 Malaysian legend Faridah Mat Saman was the first female champion reciter in the famous International Tilawah Al-Quran competition and has won the competition four times; a few years ago the then 12-year old Egyptian reciter Somaya Abdel Aziz made waves on Egyptian and and Turkish television; Al-Jazeera profiled Amina Zubairu the 2010 Qur’an competition winner in Nigeria; Sharifah Khazif Fadzilah, with shockingly gorgeous vocals won the International Tilawah Al-Quran competition in 2010; and even the great Egyptian singer Umm Kulthum has one or two Qur’anic recitations recorded for antiquity.

But you will rarely, it ever, see these women reciting on television or have their hauntingly personal expressions of God’s word signed to a record label. Even though many Muslim television channels have Qur’an playing 24 hours a day during Ramadan – not one will be a truly celebrated female.

This lack of recognising female talent is an indication of a larger, negative spiritual attitude toward women. Arguing that public recitation is forbidden because God made our voices naturally charming and alluring to attract the opposite sex is horrendously sexist, heterocentric as well as objectifying.2 It's okay for women to become famous by singing secular and corruptible non-religious songs but it's not okay to recite the pure and heavenly Qur'an.


Through the recitation men can publicly lead prayer, become imams and scholars, while within the religious realm women are asked to be silent and are often prevented from accessing positions of religious influence. It also insinuates that women are physically capable of tainting the sacred recitation by our very existence. This can have a direct impact on how we relate to our own bodies and how we connect to the revelation:


I consider it a privilege to be able to recite the Qur'an. Growing up, I was never taught the proper rules of tajweed, but as a musician, I still found myself making melodic arrangements of certain chapters and verses. Music has always been a way for me to connect to something larger than myself, so what better way to commune with God than recitation of the Qur'an?

There are many wonderful female reciters who go unrecognised and women who may never be offered the opportunity to learn how to recite because of their gender. Some who learn on their own do so in private with hushed, reserved voices.

And because of this, the larger religious world remains robbed of many talented and amazing women.
1 The translation and (male) recitation of this verse is available here. You can find Sajida's recitation here.
2 The Qur'an is beautiful. I'm not a native speaker of Arabic and sometimes the only way I can relate to the words is through the beauty of the recitation. Anyone who thinks that a person can't be affected by a powerful voice is kidding themselves. That's what makes a reciter good -- their ability to sway the hearts of others, irrespective of gender.