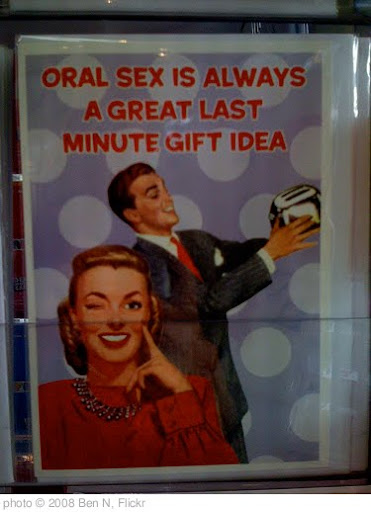 I know that I linked to this piece for last week's Drop It like It's Hot, but the conversation on Feministe yesterday really made me think that it deserves more than just a casual link. To be clear, I am going to discuss this from a heterosexual, cisgender perspective, simply because I don't have the education to discuss it from another point of view, but please feel free to include other perspectives in the comment section.

Some of the issues raised in the Feministe thread were:
For the purposes of disclosure, I feel it is important to state upfront that I am a sexual being and so my perspective will obviously be skewed by this.  For people who have sexual desire, sex is an extremely important part of our lives.  It isn't just about having an orgasm; it's about sharing something intimate with someone.  It's about feeling a connection and about feeling desirable.  I would go as far as to say that it's a need.  We are not always sexually compatible with our partners, but two people committed to each other, who want to see the other person be happy, can usually come up with some sort of compromise.  It is absolutely selfish to believe that one should simply be noble and live without for the sake of love.  Sex is not some arbitrary thing that people just happen to desire, for those of us who do desire it, it's a huge deal.

There are some people who simply cannot perform certain sex acts because of a history of abuse.  As a person with a history of sexual assault, I can completely understand this however, I also believe that it is the right of every person to choose what they can and cannot live with.  Saying I need cunnilingus or any sex act does not entitle you to receive it from anyone, but such knowledge can empower a person to leave and seek out someone who enjoys doing this, or perhaps even suggest an open relationship if bother partners are in agreement.  I think it is dangerous to imply specifically when it is a woman that one is being selfish, or to slut shame in anyway for choosing to seek out sexual satisfaction.This is particularly true when it comes to women who are marginalized in other areas of their life.

For me, dishonesty is an absolute deal breaker.  I understand that no one wants to be on the receiving end of honey we need to talk.  Hearing those words makes me instantly reach for booze, 'cause I know it's not going to be good, but it is important to have open communication in every relationship.  I don't think that an asexual person needs to say on the first date hey, ummm, I don't think we will be having sex, or if we do engage in sex it will be strictly something I do to fulfill your needs, but the conversation has to happen. When it is clear that the person you're interested in wants to have sex at some point, then a declaration needs to be made and their decision to either stay in the relationship, or move on needs to be respected without being shamed.  It's not a personal attack or a rejection to declare a need for a healthy and fulfilling sex life, and when coming from a woman it is transgressive because women are continually slut shamed for their desires.

It is far too easy to suggest that a person is being shallow, selfish or doesn't really love their partner because they have chosen to opt for sexual gratification.  After twenty-one years, I can tell you without a doubt that I have not always been in sync sexually with my partner.  Sometimes I have wanted sex as many times a day as he was willing and sometimes I have not wanted sex for months (and I do mean months on end)  Each one of my phases absolutely effected my partner, but we talked through it, and that is what you do when you love someone.

Repeatedly in the Feminsite thread, and on the actual post itself, there was the suggestion that the author in question did not love her spouse because she left. Few decided to engage with the importance of self love, or that it is absolutely selfish to expect a person to live in misery to fulfill your needs. Whether we acknowledge it or not, each day no matter how committed we are to a relationship, we make the decision to stay or leave and this happens because relationships are a constant negotiation.

Love is never an easy thing to negotiate, but loving someone does not mean that you sacrifice everything you are and need in favour of the other person.  It means listening and trying to meet their needs and accepting that you will fail, while being prepared to live with the consequences. Sometimes loving someone means letting them go if you know you cannot make them happy; it does not mean expecting them to stay because it's what you want. Even if they do choose to leave, it does not mean that they don't love you, or that the years spent together mean nothing.  What it does mean is that for some people, certain things are dealbreakers and we all have them. Whether your dealbreaker is deceit, drug abuse, criminal activity, sexual incompatibility, or even finances, what matters is that this is the point at which you know that not only are you not happy, but that you cannot ever conceive of being happy under these circumstances.  It is unfair to expect anyone to live in a perpetual state of unhappiness, because that is the antithesis of love and respect.  At that point what you want isn't actually a relationship, because relationships are about give and take.  No, what you want is someone to give themselves body and soul to you and no one is entitled to that.