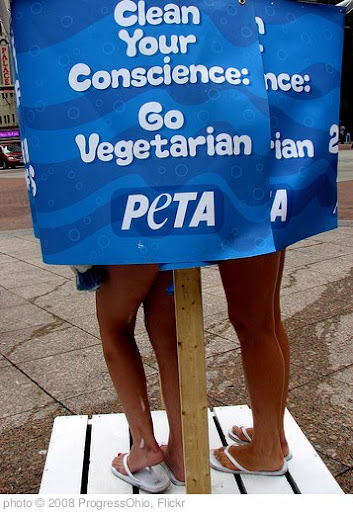 
PETA plans to register itself to operate the www.peta.xxx Web site.

"We are preparing to launch our own peta.xxx site, but instead of just showing people our iconic ads we then show them how animals suffer for entertainment," said spokeswoman Ashley Byrne, according to the Herald Sun.

"Our racier actions are sometimes a way to get people to sit up and pay attention to the plight of animals," she said.

Internet surfers who visit the x-rated site will initially be presented with animal rights groups too salacious for TV ads and campaigns. However, the sexy side of PETA, illustrated in its galleries and videos will give way to the horrific mistreatment of animals on factory farms, with pictures and video shot undercover by the group's hidden camera investigations.

"We live in a 24 hour news cycle world and we learn the racy things we do are sometimes the most effective way that we can reach particular individuals," PETA spokeswoman, Lindsay Rajt, told Huffington Post. (source)

This bait and switch routine that PeTA likes to play only serves to anger those who might be sympathetic to their cause, because the fact that they continually place animals above marginalized people is not only insulting, it aids in the continued institutionalized isms that we face.  Charges of specism for making this point are further proof of PeTA followers failing to see how they are either complicit or actively oppressing marginalized people.  You cannot ever place the welfare of an animal over and above the welfare of a human being.

It galls me when I see people I respect touting PeTA.  I understand the desire to advocate against animal cruelty, but PeTA's continual assault on marginalized people makes me wonder how they can support this organization?  It's not as if these campaigns are not highly visible.  It particularly bothers me when the person doing the support is a member of a marginalized group.  One of my fav singers of all time is K.D. Lang, and she supports PeTA.  I have often wondered if she is aware of PeTA's lesbophobic activities.