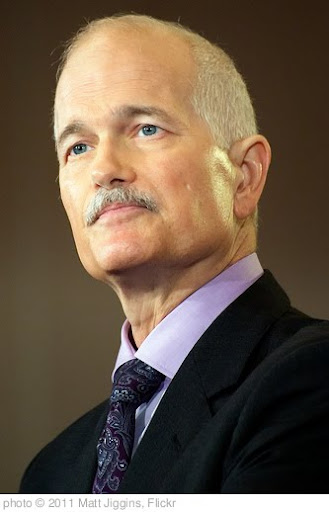 This morning I awoke to learn that Jack Layton leader of the NDP party has died of cancer.  Jack was one of the few Canadian politicians that I really liked and respected.  In the recent election, Jack led the NDP party to what would be known as the orange crush, as the NDP literally crushed the PQ to become for the first time ever, the official opposition.  I think that it is fair to say that the NDP is where it is now on the strength of Jack Layton's effort and the days to come, the party will have to struggle to maintain the amazing legacy, he leaves behind.

When someone passes we have a tendency to remember the good and forget the bad and when that happens we ignore exactly how complex a person is.


But Layton did have some brushes with controversy. In 1988, he came under fire when it emerged that he and Chow were living in a housing co-operative subsidized by the federal government, despite a combined income of $120,000. Toronto's solicitor cleared the couple of any wrong-doing, and the couple soon left the co-op and bought a house in Toronto's Chinatown.

In the 2011 election, three days before voting day, it emerged that Layton had also been caught up in a sting on a Toronto massage parlour. Layton insisted he had entered the salon seeking a legitimate shiatsu massage and didn't know the place was used for "illicit purposes." Police chose not to charge him in the sting.

Despite the scandals and Layton's failed 1991 mayoralty bid, his ambitions didn't falter; they simply shifted. In 1994, he decided to make a run for federal politics, vying for a seat in the riding of Rosedale. Again, he fared badly, finishing fourth. (source)

Layton was not a perfect man and he didn't always live by the principals that he set out for others but as politicians go, his concern for marginalized people, whether they be poor, immigrants, of colour or LGBT was enough for me to entrust my vote to him.  Rest in peace Jack, you were one of the good ones.