Should Sesame Street Let Bert and Ernie Get Married? 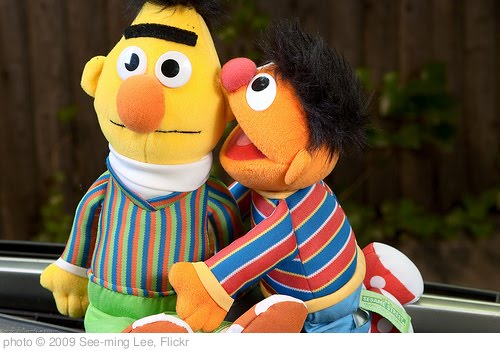 Like many kids, I grew up watching Sesame Street.  I loved the songs, the bright flashing colours and Oscar the grouch. Years later, I would sit in front of the television and watch Sesame Street with each of my boys.  Now that they have outgrown Sesame Street, I hope that it will be around should they decide to have children one day, so that I can share it with my grand kids. As a child, I never thought about the fact that Bert and Ernie lived together and slept in separate twin friends.  In fact, I never thought about the nature of their relationship at all, because it all seemed very normal, for lack of a better word. Children often don't see certain relationship as problematic, and have to be actively taught what they are supposed to perceive as normal.  This is why I believe that the new petition at Change.org to out Bert and Ernie is important.


In this horrific age of LGBT kids taking their own lives, they need to know that they ARE BEAUTIFUL and their lives are worth living. Aside from those that are committing suicide, the bullies that facilitate these tragedies need to learn that homophobia is NOT okay. They need to know that acceptance of their fellow human beings would indeed plant a seed of peace that will reverberate throughout the world. We are not asking that Sesame Street do anything crude or disrespectful. Only that they allow Bert & Ernie to marry or even add a transgender character to the show. It can be done in a tasteful way. Let us teach tolerance of those that are different. Let Sesame Street and PBS Kids be a big part in saving many worthy lives. Please visit our Facebook

If all kids see are images of straight couples, that becomes the norm for them. If you think about it, Fred and Wilma Flintstone have the exact same living conditions as Bert and Ernie, and they are understood as husband and wife and therefore, it would not take a big leap to plan a wedding for Bert and Ernie. Bert and Ernie could continue to sleep in their separate beds and their relationship could be acknowledged as a loving one, similar to Fred and Wilma.

Think about how great this would be for GLBT kids as well.  BLGT people have to struggle as they grow to find role models, or people that look like them.  Bert and Ernie's high profile would make this task just a little bit easier, and would let them know that who they are is not only acceptable but normal.

I remember the big stink when it was suggested that Tinky Winky of the teletubbies is gay, though I have no idea how this was determined. Oh dear what about the children?  The problem with this approach is the failure to recognize that some of these children are LGBT children, and that they would absolutely benefit from seeing images of themselves in popculture. What conservatives really mean is what about the straight, cisgender kids?  My answer to this is that they won't be harmed by a gay Bert and Ernie any more than they would have been bothered by a gay teletubby, because what it will teach them is not to assign a negative value to difference.  The only reason a gay Bert and Ernie could possibly be problematic to anyone, is a desire to maintain straight privilege.  One of the most insidious acts of oppression is erasure.

They need not worry about the downfall of hetero-sexism, if Bert and Ernie end up getting married, because it will take a lot more than that to end hetero-sexism as an institutionalized force in our society. A gay Bert and Ernie will be like throwing a pebble into an ocean in terms of the effect that it will cause, but because fundies are so determined to hate, that even the smallest amount of progress is seen as encroaching upon undeserved privilege.  They will be loud in a campaign to stop the marriage, if that is what Sesame Street chooses to do, but since Sesame Street is understood to be overly liberal anyway (too many marginalized people on the show don't you know) they don't have anything to lose.  I say sign the petition and hope for the best.  A wedding between Bert and Ernie would outrank the royal wedding in my mind.
Posted by Renee at Thursday, August 11, 2011