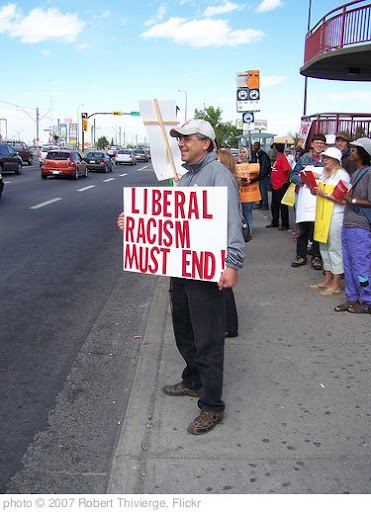 Instead of reading the work of people of colour regarding racism, far too many White people turn to Tim Wise and believe that their work is done.  Tim Wise has said many things that I believe in but much of what he has to say misses the mark.  I also think it is important to note that while White allies are necessary, placing them into a position where they once again are authority figures does not destabilize racism and it also does not deal with the fact that even with the best intentions the very nature of existing with White privilege means that critical mistakes are bound to happen.  To illustrate this point, take a look at a section of Wise's most recent piece:


So while the immediate responsibility for these attacks must be placed upon the young people who perpetrated them, the larger problem is one of deeply-ingrained racist stereotypes against people of color, which then create parallel and opposite stereotypes about whites, the latter of which can, in cases such as this, actually increase the likelihood of white injury. To end the latter, we have to attend to the former.

Likewise, to the extent folks of color (especially young black and brown teens) may be inclined to see whites in a negative light, there is an easy solution, which would not only likely dampen such bias, but would also help build antiracist solidarity among young people generally; namely, rather than talking less about racism and its history (as the right would prefer), we should talk more about it, but include the stories of white allies throughout history as well.

After all, if young people of color and young whites learned that there have been, in every generation, whites who stood with black and brown folks and challenged racial injustice, how might youth of all colors respond to one another differently? If white youth learned that there were role models in their community who they could follow in this regard, how might that change the racial attitudes of white people, and their willingness to challenge racism? And if young blacks in places like Milwaukee learned of those persons — as with Father James Groppi, who stood shoulder to shoulder with black leaders in that city to fight racist policies in the 1960s and 70s — how might such knowledge effect their perceptions of their white brothers and sisters?

In other words, teach not just about racism but antiracist resistance, including that engaged by whites, in Milwaukee and across the nation. Doing so would promote allyship, break down stereotypes on all sides, and encourage the kinds of solidarity that troubled and divided cities like Milwaukee need in order to move forward.

Black children, like all other kids first see racial difference, but they don't immediately apply value to difference.  They learn through lived experience that Whiteness is no friend to the Black person.  Despite being taught in school that everything White is not only normal but good, some Black children grow to be prejudicial against Whites, and others to be extremely distrustful.  Sitting them in a class and pointing out that there are some good White allies, is not going to change their lived experience.  When they walk out of that class, and face the real world, they will once again enter a society that views them as second class citizens.

It takes an astounding amount of privilege to announce that Black children need to sit in a class and learn about Whiteness, as though they don't spend almost every waking moment doing this already, because Whiteness is an integral part of every single into every single social institution.

Ultimately, what Wise wants is for us to deny our lived experience.  Look over there, there's a White guy that isn't so bad though he exists with White privilege - quick hand the man some cookies.  The idea of sitting in a classroom to learn about so-called good Whites is offensive and especially so, when we consider that Black history is either being actively erased from text books, or ignored altogether. No, what we need are more classes about White folk.

This passage illustrates the problem with liberal anti-racist White folks being voices of authority in the movement to end racism.  They may be capable of understanding somethings, but quite often they miss why certain things are relevant, and why some things are not, because their Whiteness gets in the way.  As long as you are White, your Whiteness is always going to get in the way.  This is why turning to a White anti-racist, versus listening to the words of a person of colour, when it comes to race, means that you are not really challenging your privilege.  The whole reason men like Wise are in the position that they are is because of their Whiteness.  They don't have to do the dirty work like organize and print the flyers; they simply have to show up and speak to be understood as an authority.

Wise constantly talks about being called a nigger lover, and to me it smacks of wanting recognition for his good deeds.  He wants us to know that there is a price to pay for being an anti-racist in a White supremacist world, but no price he may pay, comes close to that paid daily by people of colour.  Being called a nigger lover, is in no way equivalent to being called a nigger, or any other racial slur.  Wise's humanity is never directly challenged for his beliefs, while the existence of person of colour is challenged for daring to breathe the same air as a White person.  I have no sympathy for this man who publishes books, leads seminars etc., while Black children are being purposefully undereducated, imprisoned, murdered by the police, and denigrated daily in the media. The last thing Blacks need to focus on is understanding Whiteness, and he would understand that if his privilege was not his continual stumbling block.  It seems to me, that Wise needs to spend less time talking, and more time listening.