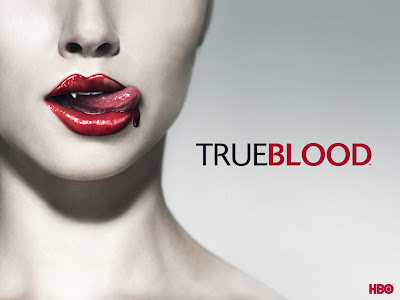 Let's do something a little different this week.  Let's discuss last night episode by character/plot.  Last night's episode began with Alcide carrying Sookie away from the battle.  Sookie is taken from him by Bill.  Bill tries to give her his blood, while Alcide asks, "does she even have a pulse?"  Can we just say right now that there was no suspense to this. Of course the minute that Sookie wakes up she barely thanks Alcide and proceeds to make plans with Bill to get Eric. In the first sensible thing that Alcide has done in a long time he tells her that he is done and walks out of the house.
Unfortunately for Alcide, Debbie is awake when he gets home.  She pretends to sleep but you can see the tension all over her.  (BTW, thank you Alan Ball for the naked shot of my fav werewolf)  As Alcide snuggles up to Debbie, her eyes go yellow.  It's clear to me that Alcide needs to just take his fine behind away from both Sookie and Debbie.  Could any man really be that slow to catch on?
Creepy Debbie shows up at Sookie's place the next day with flowers, claiming to want to help Sookie.  Right after telling Debbie that she cannot forget the fact that she tried to kill her, Sookie listens to her thoughts and decides to trust her. Obviously, Debbie would only think what she wanted Sookie to know.  So thelma and louise head off to Goddess Emporium, where Debbie rats her out immediately.  Tara holds a gun on Sookie, and tells her how stupid she is for showing up, but I guess the idea of some good ole fashioned spunky agency was too much for Sookie to avoid.  Tara tells Sookie where Bill is and Sookie charges Tara and escapes.  One would think she would have clued in then that Debbie is up to no good, but Sookie jumps into Debbie's truck. It's also worth mentioning that she showed no concern for the fact that Tara was being held prisoner and so her main target to help as Bill. Why is Tara even friends with this woman?
Read More
Posted by Renee at Monday, August 22, 2011