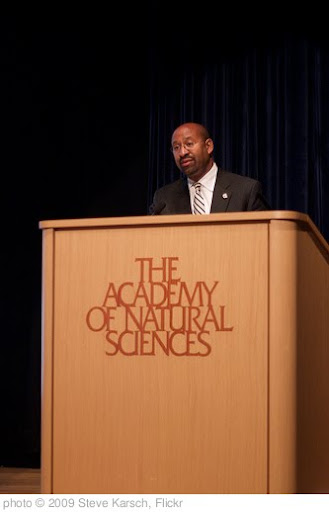 When I think of flash mobs, I think of people coming together to do some sort of artistic performance.  Sometimes these performances even have a political message, that teaches tolerance for others.  Recently however, flash mobs have come to mean largely Black youths coming together to swarm a store and steal thousands of dollars of inventory in Philadelphia. Mayor Michael Nutter of Philadelphia,had some shocking comments to say on this phenomenon.


National media has been covering these incidents, and it has gotten at least one mayor so irate that he accused the black youth in his city as “making their race look bad.”  During a combative speech at the Mount Carmel Baptist Church in Philadelphia, Mayor Michael Nutter blasted young black men, telling them to stop behaving like “sperm donors” and “human ATMs.” He said parents have to do a better job of supervising and training their children.

“If you walk into somebody’s office with your hair uncombed and a pick in the back, and your shoes untied and your pants half-down, tattoos up and down your arms and on your neck, and you wonder why somebody won’t hire you?” Nutter told the congregation. “They don’t hire you ’cause you look like you’re crazy. You have damaged your own race.”

“I am a proud black man in this country,” Nutter said in a subsequent interview with the Associated Press. “It was a message that needed to be said. It needed to be said at this time…. People have had enough of this nonsense, black and white.” (source)

The fact that he can attest that the behaviour of some is damaging to an entire race is in and of itself a reflection of Nutter's own internalized racism.  Blacks are perceived of as a homogenized group, whereas Whites continue to be viewed as individuals no matter what heinous crimes some may commit. What Nutter is really worried about is how these flash mobs reflect upon him as a Black man and not out of any genuine concern for youth who are participating in these mobs.

He goes on to talk about presentation citing that hair uncombed and tattoos make one unemployable.  What is this but an attempt to coerce conformity upon youth?  Being middle class or even upper class is more than the ability to consume, it is also about a pattern of behaviour that is learned. I am particularly troubled by his assertion that the condition of one's hair should make one unemployable. Often times Black hair in its natural state is seen as unkempt and at time politically charged.  To blame appearance for Black youth unemployment is to completely ignore the way that these kids are often viewed by Whiteness. Young Black men in particular are viewed as a threat.  Even professionally educated Blacks have difficulty getting jobs and this is especially true if an ethnic name appears on their resume and yet somehow these youth, who society has chosen to ignore or responsible for their own unemployment.  I suppose the fact that Blacks have been hardest hit by the recession is all the fault of Black people and has nothing to do with White supremacy as well.

Of course, the next easy target is the parents.  He preys upon absentee fathers and parents who give money to their children instead of parenting.  What he does not acknowledge is that it take a village to raise a child. Government has let families down by not supporting after school programs.  You want to keep children out of trouble, give them something to do that matches their interests.  This could be anything from sports teams, to dance, music or art.  Children need to engaged by the world around them.  Even in the supposed ideal setting of two parents working forty hours a week, does not leave enough time to spend together as a family. In many cases, today's parents are working longer hours for less pay than the generation before them.  Some families must have multiple part time jobs in order to keep a roof over their heads.  Where is the relief for these families?  Blaming them for being absent when they have no choice is victim blaming and shaming.

I also think that it is important to note that property crime is an example of the class divide.  We spend hours upon hours aiming products at children.  Advertisers count on the nag factor to sell their items. Children are taught that their value is directly linked to what they have the ability to assume and having less than the person next to you, means that you are less than.  Is it any wonder that some develop a sense of entitlement when we have taught them that certain items are necessary and do not constitute a desire? The bottom line is that if you want to end property theft, then the gap between rich and poor needs to be reduced and or eliminated altogether.

The bottom line is that a Black leader standing up and publicly affirming every negative stereotype that Whiteness has of Black youth is not helping.  In fact, Whiteness loves nothing more than when they can get a Tom to openly chastise other Blacks. If you doubt that, think about the way that Whiteness embraced Bill Cosby and his infamous pound cake speech.  It seems to me that if Nutter is truly worried about the state of Black youth that he should be taking proactive measures rather than publicly shaming Black youth but then it's easier to be a dupe of Whiteness than to do anything positive.