Apparently, Dressing Your Daughter Like A Sex Woker is Better than Putting her in Sports

I am sure that you heard that for the season opener of Toddler's and Tiaras that a three year old girl appeared dressed as Julia Roberts from the movie Pretty Woman.  For those who have not heard, please see the image below. 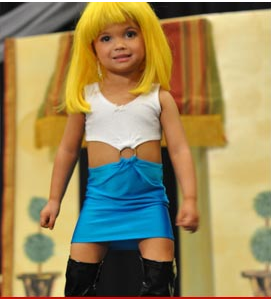 I am quite sure that in this space, I don't have to talk about why it is wrong to sexualize a three year old and since many blogs have already covered this issue I had to decided to leave it alone until I read the following:

Wendy says, "I'm raising my child just as well as any mother does ... I take my kid to church every week ... at least I'm not forcing them into sports and getting my child injured like some parents."

Wendy adds, "People need to look at their own family and what they're doing. I don't know why people are focusing so much on pageant moms when there's much more harmful things people are letting their children do!" (source)

Wow, sports is worse than dressing your daughter up than a sex worker because she might get hurt. I have news for Wendy, or did get hurt being dressed up to parade in front of the world like that.  Every time one little girl is sexualized in the media ALL girls get hurt.

Sports can offer many things to a child.  It helps them stay in shape, teaches about team work, responsibility, victory, defeat, self reliance, and discipline.  Sports can play an important role in the life of a young girl because young women are often taught to be submissive victims or are to frail to be active in anyway.  There are also the numerous sports scholarships that have enabled many young women to attain a college education but somehow despite all of that, sports are harmful and risky.  I will tell you outright that if I had a daughter, I would much prefer to see her in any kind of sports jersey than dressed like that.

The other thing that has been bothering me about this conversation is the focus on the mothers.  Where are the fathers and what role do they play in having their daughters dress like this?  I think it's easy to focus on the mother, because parenting is normally the preserve of women, but that is precisely why fathers need to be held equally accountable for their children. It is because of sexism that we are so fixated solely on what the mother is doing.

This entire incident is a hot mess from start to finish.  These pageants for young girls teach them to be sexy before their bodies even begin to develop and also teach them that their worth is intrinsically tied to their physical beauty rather than their intelligence, strength of will, morals and or actions.  All young girls deserve better than this and I am quite certain that these incidents will continue to happen.

On a final note, I would like to add that TLC is also to blame for this.  This little girl should never have been filmed like this and this show amounts to nothing more than porn for pedophiles. How a network that has the nerve to call itself The Learning Channel can suggest that this program produces some kind of educational gain for the populace is absolutely beyond me.  TLC has long needed to come up with a new tag line, because this network has not actually been about learning for a very long time.
Posted by Renee at Monday, September 12, 2011