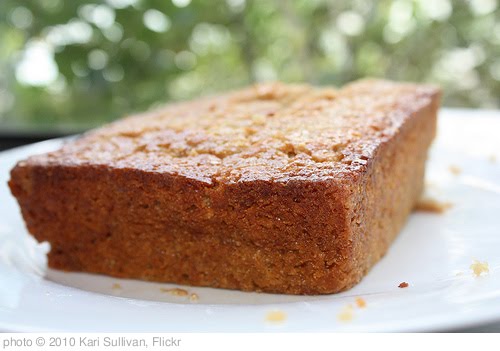 I love to be in the kitchen when I am able, and I love to cook for my family.  I watch hours of the foodnetwork everyday as I write blog posts, looking for new ideas.  I like to continually introduce my family to different foods and new flavors.  Baking however, is something that I am not a fan of.  It could be because cooking is art and baking is a science.  Whether you are baking a cake or cookies, inevitably the measuring cups and measuring spoons have to be used, whereas; when you cook, you can add a bit of this and that, and alter the recipe to your particular palate.

My love and respect of food, means that I cannot stand letting food go to waste.  The desire to ensure that everything we purchase gets consumed, means that at least once a week, I get into a battle with the kids about eating the leftovers. When I notice that the banana's have reached the point where they are singing Swing Low Sweet Chariot, inevitably I will bake a banana bread to ensure that they are consumed.  This is something that I used to hardly ever do, because my family loves bananas.  They are usually the very first fruit eaten, that is until recently.

The last three weeks, I have found 6-8 bananas well past their prime in the fruit bowl, and so I have made a double size banana bread, which was consumed in one day btw.  At first, I was really pleased that they ate the bread, but when it happened again the next week, I started to realize that something was most definitely up.

Last night, I couldn't sleep and so I decided to surprise them with peanut butter and jam muffins for breakfast.  The children love it when I bake, and I knew that this would be a wonderful breakfast surprise for them. As I mixed the peanut butter with oil, brown sugar, flour and eggs, I thought back to a few years ago when Destruction pointed out that other mommies bake far more often than I do.  At the time, I really saw it as him using my gender to get me to create culinary delights for them, and quickly pointed out that I would be happy to take him to the bakery. When that didn't work, he actually attempted to order me into the kitchen.  Though he was only four at the time, as you might well imagine, this did not have the result that he intended.

Each time I do get around to baking for my family, whatever I make gets consumed quickly.  They always ooh and aah about how good it is, and say that because I do it so infrequently, that they have to get their share as quickly as possible.  At any rate, while I was baking the muffins last night, I began to wonder if the sudden appearance of soft bananas, was to get me to bake for them more often.  How exactly do kids who are more than capable of eating 2-3 bananas a day, if I don't monitor them, suddenly stop eating bananas altogether?  Then I thought about the fact that the unhusband, and the kids have all taken turns mentioning to me that the bananas are getting soft, and that if we don't eat them soon, that something would have to be done. Uh huh.

There you have it folks.  The menfolk in my family are crafty, crafty, crafty.  I believe that they have avoided eating the bananas, because they knew that I would not let them go to waste.  I believe they have realized that if they could just forgo their desire for a little while, that the soft bananas would result in a warm and comforting banana bread.  Yes, if they stopped eating and then made a point of telling me how much they love the banana bread when I made it, I would be inspired to keep baking.  Readers, I am being exploited and manipulated.  It took me awhile to figure out what was going on, but now I am sure of it.

I am sure that they were much encouraged when the peanut butter muffins appeared this morning.  Yes, those crafty, crafty, crafty menfolk must have believed that had finally broken me.  Not only did I bake a banana bread this week, I baked them muffins.  Earlier in the week, I had even mentioned making an apple cake, because this time of the year, apples are plentiful and cheap.  If you look in my fruit bowl right now, you will see that the menfolk have consumed all of the pears, but the apples mysteriously are still in the bowl.  Uh huh. I now firmly believe that they are attempting to shift the great banana bread conspiracy to apples, to get me to produce an apple cake.

I cannot prove my suspicions conclusively, but I do believe that the sudden lack of consumption of fruit, combined with the occasional comments about the possibility of fruit going to waste, amounts to strong evidence that I have been played.  This weekend, I plan to present the menfolk with my findings.  I am certain that Destruction will be the one to cave first. He has never been good at keeping a secret, whereas; Mayhem and the unhusband are like a vault.  I am not sure what kind of penance I should sentence them to once their guilt and manipulation have been revealed, but there most certainly shall be justice.  I have always known that they have the potential to be crafty, but to have all three of them manipulating me this way, is something I never would have expected them to be capable of. This is actually worse than Sparky's Beloved hiding the bread maker, to get him to bake him fresh bread daily by hand. Yes, it's treachery

I think that the three of them need to spend time in kitchen baking me something.  Yes, yes, I most certainly do.  Now that I am on to them, I shall hence forth give them the side eye every time they mention any sort of baked good.  There will be no more baking on a weekly basis.
Posted by Renee at Friday, September 16, 2011