Jackie O was not a fan of MLK 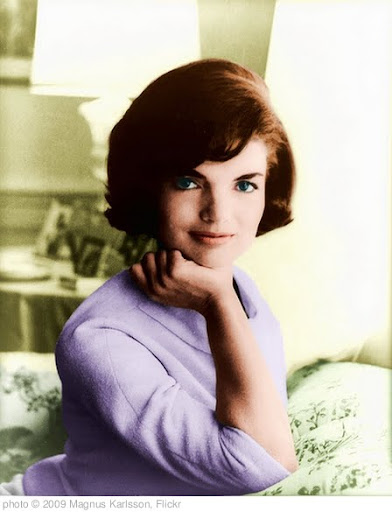 MLK motivated many people in his lifetime and his tireless efforts for social change have caused many to absolutely worship his memory. In 1964 Jackie O taped a series of interviews with  Arthur M. Schlesinger, that have recently been released to the public.  She had some rather unpleasant things to say about MLK who she referred to as "tricky" and "phony".


Mrs Kennedy said her view of   King was formed after being told of secret FBI wiretaps which showed him trying to organise a sex party before he attended the March on Washington in August 1963, at which he delivered his ‘I Have a Dream’ speech.

She said her brother-in-law Robert told her that King made disparaging remarks about JFK at the funeral and about Cardinal Richard Cushing, who delivered the eulogy.


‘I just can’t see a picture of Martin Luther King without thinking, you know, that man’s terrible,’ she said.

‘He made fun of Cardinal Cushing and said that he was drunk at it [the funeral] – and things about they almost dropped the coffin. I mean Martin Luther King is really a tricky person.’

There are some who have expressed outrage over these interviews.  I for one think that if she views MLK as a phony for his sexual escapades then her husband is also a phony.  It is a well known fact that JFK had affairs with various women over the course of their marriage.  Today, such lechery would make him unelectable in the U.S.  If you doubt that just think about Gary Hart or John Edwards.
I don't think that the fact that MLK was a lecher diminishes his achievements in any way. The reason people are upset is because Jackie sat in judgement of MLK while refusing to comment on Jack's numerous infidelities.  In what I feel was a preemptive defense, Caroline Kennedy said:

the comments didn’t reflect her mother’s true feelings about King, pointing out that she was proud to attend his funeral following his assassination in April 1968

Caroline Kennedy, the daughter of John and Jackie, said her mother’s comments about King were evidence of the ‘poisonous’ activities of then FBI director J  Edgar Hoover.

The truth is, people hated King for for less valid reasons in his lifetime. Today King may be considered a hero, but when he died, he certainly was not as popular as he is today.  Even though there was a mass outpouring of grief at his funeral, there were plenty of Blacks that felt that King was moving to fast, and some that felt that he was selling out to the White power structure.  Among Whites there were plenty that felt that he was a Black man who didn't know his place and was riling up the good negras in their communities.  His commentary on Vietnam and his intention to unify the races based in shared class oppression hardly made him someone that upper echelons admired.  Today it might be considered gauche to speak negatively about MLK, but it most certainly was not then.

Deifying anyone is problematic because it obscures who they really were and corrupts the historical record. No one and I do mean no one, is beyond fail and to deify anyone means that we have purposefully chosen to ignore the ways in which they supported and benefited from various isms.  I know that many believe that we should not air the dirty laundry of someone who has been considered a hero but when we hold this opinion we actually detract from their humanity.  Who amongst us is perfect?

When Mary Daly died there was a round of praise for her and many forgot to mention that she was an outright transphobe. Her actions were absolutely destructive to the trans community and when trans women sought to seek of their pain they were silenced.  What Mary Daly did in terms of challenging patriarchy in religion was wonderful and acknowledging that she hurt people does not detract from that but it does absolutely honor those whom she actively hurt.  Just Daly was not perfect neither was Dr. King.

It said that when we become adults we put away our childish things but in the case of hero worship that is far from the truth. We actively want someone to idolize and are constantly maintaining a shiny pedestal for those we believe to be above reproach.  It is terrible think that someone like King was a womanizer because it plays into the stereotype of the sex obsessed Black male animal however the real issue is that the stereotype exists.  White men have a history of being just as lecherous.

Not idolizing someone does not mean that we have to stop respecting the good that they did but it does mean looking at them through mature eyes that recognize the good and the bad.  King was a lecher and he was also notoriously cheap.  Anyone who would budget his wife's sanitary napkins and count how many she used a month is cheap.  All of this makes him a real and complete human being and I feel that truly respecting that means acknowledging the good with the bad.
Posted by Renee at Tuesday, September 13, 2011