The Jasmine Diaries Part II: 'Exotic' is not a Compliment 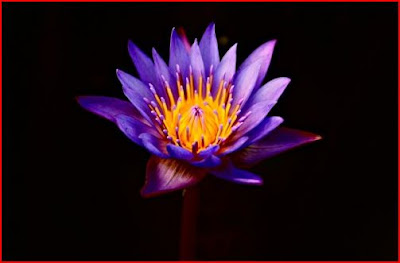 Tell me, Maria, why I see her dancing there

Why her smoldering eyes still scorch my soul.
I feel her, I see her, the sun caught in her raven hair
It's blazing in me out of all control"
--"Hellfire" from Walt Disney's "The Hunchback of Notre Dame" 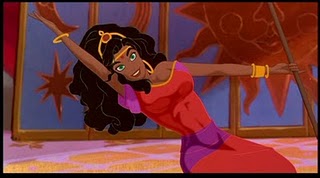 Images are one of the most powerful forms of social control. Images tell us stories about who we are, where we come from and what our place in the world is. Images narrativize and normalize history and shape our collective social conscious. In a not-so-post colonial, white supremacist, heteropatriarchal world, the images we see are often shaped by intersecting oppressions, and without critical consciousness we risk imbibing and perpetuating the lies of the oppressors.
Princess Jasmine is an image that exists at the crossroads of multiple oppressions: a Brown, Middle-Eastern/South Asian woman who is sexualized and objectified, created by the hands and imaginations of privileged white men. In the first post of this series I briefly discussed the colonial-sexual history that gave birth to Jasmine's image; this post will look at how her image, juxtaposed with the menagerie of white Disney princesses, shaped my sexual self-awareness and relationship to my body.
The white Princess is an image built off the devaluation and dehumanization of women of color, constituted in opposition to our supposed unfeminine and undesirable qualities. As WOC, we are the savages, the whores, only good for fucking, the sleeping dictionaries that exist as perks for colonizing white men, only to be tossed aside of course in favor of the elevated white women. Throughout the history of European colonization, white men have raped, abused, enslaved, used, fucked, had children with and lived off the labor and bodies of WOC, but they have never even come close to acknowledging our power, dignity and humanity. 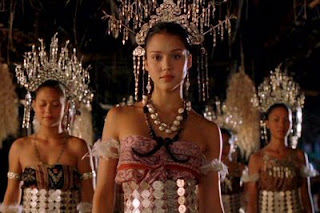 Mainstream understandings of connotative femininity - helplessness, purity, grace, softness -are racially coded, and exist so that the majority of the world's women can be erased and exploited. White feminists often decry the influence of Disney princess images on young (white) girls, but they rarely take an intersectional approach to understand what those images mean for WOC. It's one thing for white women to recognize and reject a falsely idealized image of themselves, but how do WOC 'reject' or 'resist' images that don't even acknowledge our existence, and that are specifically designed to oppositionally demean us?
As a young, bookish Brown girl growing up in Dubai, even though Jasmine was the closest in appearance to me, I chose to identify with the 'real' princesses, whom I implicitly knew needed to have flowing golden hair, European-style ballgowns and blue eyes. Those were the princesses universally adored, who only needed to raise their helpless white hand for a bevy of people to rush to their side. I sincerely failed to see the problem in identifying with/ fantasizing about being a white Princess. I continued to believe that as soon as I started dating, despite my skin color and ethnicity, that I would encounter a bevy of Prince-like men who would treat me like the Princess I knew I was: beautiful and kind, sensitive and delicately feminine. I soon learned otherwise.
I learned that across all races of men, light-skin women with straight noses were valued more than I. I learned that my naturally thick, curly hair had to be chemically straightened in order to be considered beautiful. I learned that despite my social graces, my command of language, my soul-deep love for poetry, someone with blonde hair and rosy cheeks could float into a room and have men attribute those qualities to her naturally. White women who read 'post colonial literature' were viewed as worldly and graceful, whereas I was merely incomprehensible and strange. And somewhere along the way, I made an implicit choice in response to my reality: if I could not embody the demure, blonde princess, I would be her opposite. I would be Jasmine. If male attention would not rivet upon my grace and gentleness, I would command it with my sexuality. I would wear tight, cleavage-baring clothes, bare my belly whenever possible, openly talk about fucking, and vehemently deny that I wanted any of the things princesses are supposed to want: commitment, marriage, roses, a lover who would awake beside me with tenderness mingling with the dawn in his eyes.
"I've developed a theory for princesas of color. Earned privileges in a given life cycle only buy us time. The structures of subordination will get even the achievers. Those who think they might have escaped find themselves - like other princesas of color - treated just as women"
-"La Princesa" by Latina Anonima
While I had convinced myself that being Jasmine was empowering, I had no idea how quickly I had slipped into the niches created for WOC by colonial heteropatriarchy, nor that the history of colonial-sexual violence that created Jasmine was actively shaping my current reality. I had put on the harem-girl veil and the temple-dancer sari, happily embracing the attention my 'exotic' sexuality brought me, without stopping to consider how, why or by whom those images were created/distorted in the first place, and what it meant for me to embody them. It hadn't occurred to me that white heteropatriarchy regarded 'exotic' and 'respectable' as mutually exclusive categories. It hadn't occurred to me that my/Jasmine's body would always be a clandestine indulgence, an exploitable resource: I'd never considered the histories and limitations that were becoming reborn through my unreflective embodiment of Jasmine.
Believing in Disney's vision of Jasmine, their vision of me, led me to devalue and degrade my innate humanity, my beauty, my power, my complexity into a monolithic, colonial fantasy that was never about the real me to begin with. It was always about white colonial guilt and 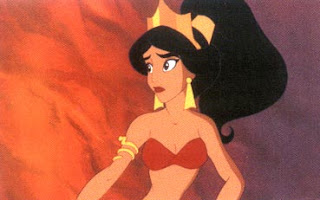 the sexualization of conquest, and my experience being that fantasy left me deeply shaken. Even though I'm now happily engaged to a wonderful, caring, beautiful man, I will always remember feeling and being treated like I was worthless, a violable object, a fetish that must be hidden in the light of day. The lessons written on Jasmine's body will remain with me the rest of my life, because they opened my eyes to the reality of being a WOC in this world.
One of the most disturbing scenes in Disney's "Aladdin" is when Jasmine must pretend to seduce Jaffar in order to distract him. The clothing that the animators chose to put her in, complete with the shackles, are all a white, colonial wet dream. And she's the only Disney princess who's had to use her body in this way to distract someone. Then there's this scene in "The Hunchback of Notre Dame" where Esmeralda is shimmying her hips and breasts and basically ends with a pole-dance sequence: a far cry from the delicate waltzes and pirouettes that Belle and Aurora dance. The simultaneous fascination and revulsion that Whiteness has for WOC bodies are unmistakeably evident in Disney's posturing of Jasmine and Esmeralda.
Oftentimes, white people think they're complimenting me by saying I look 'exotic'. They don't realize that the word 'exotic' itself is bloodstained with a history of colonial rape, or what it means for me, as a WOC, to be the exotic Other in a white supremacist world. Or white women will sigh with longing over Jasmine tropes and evince a desire to embody/consume the Other: darkening their hair, wearing black eyeliner, big earrings or saris.
They like to play at being what they think I am, what they think Jasmine is. For them, Jasmine is a an exciting adventure, a garment they can put on and take off at will. For me, she's real, she's my everyday, she walks in my skin and looks through my eyes. The degradation and violence that she endures is done to me.
The brilliant Emi Koyama once said "There's no innocent way of being in this world", meaning that no one, not even the most enlightened among us, can exist outside of history, outside of the legacies of colonial violence that shaped the world we inhabit.

So how do we as WOC negotiate self-love, fulfillment and passion in a world that's determined to continue rewriting that history on our bodies, our minds, our desires? Where is the space to begin decolonizing our self-concepts, to recreate Jasmine in our image?
In the next post, I will attempt to answer these questions through critical reflection on my identity/ positionality. I hope some of you will join me in sharing your own conclusions and reflections on sexual self-awareness for WOC.
Posted by Renee at Friday, September 23, 2011