LGBT Deaths and The Unacknowledged Genocide 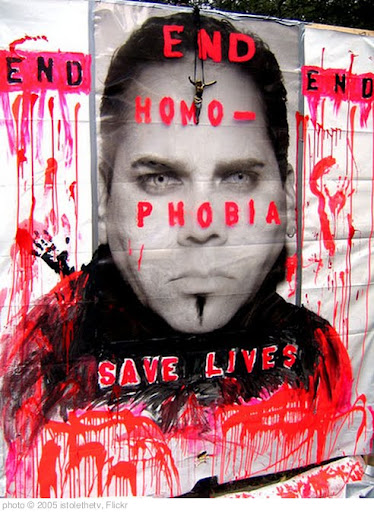 According to The Guardian there are 82 countries in which homosexuality is a crime.  In many cases it is the result of religious persecution, however I think that it is worth noting that this is nothing more than prop to attack LGBT members to uphold straight and cis privilege.  No matter which group that we speak about globally, there is always a desire to have one group placed at the bottom of the hierarchy pyramid to actively oppress.

To be perfectly clear, someone's sexuality or gender identity has no effect on the larger population other than that which we create for nefarious purposes.


Last Thursday, three men were hanged in Iran for the crime of lavat, sexual intercourse between two men. The case is considered extreme even by Iranian standards, because while the death penalty is in place for homosexuality, it is usually enforced only when there is a charge of assault or rape alongside it; the accusations in these three cases were of consensual sex.

In Uganda, politicians have been seeking since 2009 to institute a strikingly nasty piece of legislation: the death penalty for "aggravated homosexuality" (being homosexual more than once) and, in a totalitarian touch, penalties for teachers, doctors and even parents who suspected that someone in their care was gay but didn't report them. In Belize, there is a law on the statute books that criminalises homosexuality; a gay rights group in the country, Unibam, has brought a motion challenging the law, and had this reply from the minister of works, Anthony "Boots" Martinez: "My position is that God never placed anything on me for me to look at a man and jump on a man. I'll be clear on it … How would you decriminalise that, I am sorry, but that is law. Not only is the law made by man, that is a law made from the Bible. Why you think God made a man and a woman, man has what woman wants, and woman has what man wants, it's as simple as that. I'll fight tooth and nail to keep that law." (source)

Targeting a group of people for death based in their identity is genocide.  Across the world the GLBT community is specifically targeted for death and yet genocide is a word that is rarely associated with their deaths.  Sometimes I think it is because the language used to describe the nations that have specific laws on the books regarding the criminalization of homosexuality is decidedly imperialist.   In the same breath that we are talking about Uganda and Iran we need to remember that one can still die for being a member of the GLBT community in the so-called enlightened West. Simply referring to these deaths as hate crimes in the West means that heterosexism as a globally instutionalized force need never be actively recognized and challenged.  The issue of GLBT genocide is global one and not one restricted to backward countries.

Sometimes I think that the word genocide is ignored because attaching that label would mean culpability for the oppressors.  We have repeatedly said never again after the Holocaust, and yet genocide continues to happen.  The truth of the matter is that unless we actively care about the group that is being killed, we don't act to stop the violence.  If this kind of violence were targeted at straight, cis, White men of class privilege you can bet that there would an inquest going on and the Vatican and the United Nations would be actively working to stem the flow of blood.


Recently, I was talking to a friend about Ronald Reagan.  This is man who is a mass murderer as far as I am concerned.  When HIV/AIDS was decimating the LGBT community, he didn't care and most certainly did not do anything to attempt to stop it.  It is only when the straight population, and hemophiliacs started contracting the virus that suddenly it became an issue for discussion.  Each time I hear a Republican speak warmly of Reagan, all that I can think about is the fact that he was largely responsible for the needless death of so many.  Why aren't we actively talking about this?  Why aren't we shouting this out, every time that his name is mentioned?  We aren't because under his tenure the people that died were GLBT and as much as most hate being called homophobic (including myself I might add), acknowledging these deaths for what they were continues to be avoided.

Even when the world isn't actively slaughtering the TLBG community they still don't function with the same sort of rights that straight cis people do. Trans women are still struggling to be accepted as women, even in communities that claim to advocate on behalf of women.  Lesbians still live with the threat of corrective rape and yet we universalize rape to specifically silence their experiences.  Trans men are assumed specifically to desire male privilege even as their masculinity is continually challenged.  Gay men can barely hold hands in public, and neighbours whisper about whether or not they are gay as they go about their daily lives.  To be GLBT is to constantly be watched and monitored.  It is to exist as a group and not an individual.  When even your life can be taken at a moments notice, how can we pretend that our only real concern is the safety of the children?

When I read the story at The Guardian, I knew that all of the same imperialist language would be used because it makes people feel better to believe that those people over there are the bad ones, and not us here in the west.  This same sort of reductive language is constantly aimed at women to reduce the effect of rape, sexual harassment, domestic violence, pay inequity etc., here in the West.  Women are told that they should be thankful that they don't live in the Middle East, as though living in the West means that one is not targeted on a daily basis.  I don't know what the answers are, but I do know that creating other groups of people as the primary oppressors means a purposeful lack of culpability.

Each straight cis person in our own way is responsible for these acts of violence.  We all benefit from the global institutionalization of heterosexism and no matter how many TLBG friends we have or how much money we give to BLGT causes, until we actively recognize their humanity we are no better than any other group foreign or domestic.  Mostly, I would just like to see us all own the label of genocide because if we can kill on mass, we should at least of the guts to claim the label for our collective actions.
Posted by Renee at Wednesday, September 14, 2011